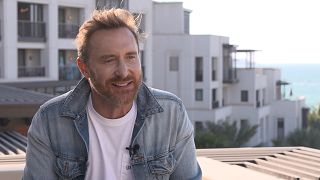 David Guetta is the world’s number one DJ and has sold over 40 million records. We catch up with the French superstar as he put on a charitable performance on the helipad of the Burj Al Arab in Dubai to raise funds to support the global battle against Covid.

How did the charitable performance come about?

“So, yes, it’s called United at Home. And I started it in Miami and then New York City and Paris in front of the Louvre Museum and now this iconic, extraordinary place. The idea is to get money for the people in need during COVID, but also for me to have fun and to entertain people because let’s not forget, people still need to be entertained. That’s why I think it has been very successful”.

You’ve had to address new ways of working, how important is it to get the entertainment industry moving again?

“Yes, absolutely. That was a challenge for me at the beginning, you know, because I’m so used to have real people in front of me, you know, but because of all the feedback that I had in the previous shows, I realised how helpful and how much people enjoyed it. So now I’m just imagining the people and it works. I think this show is going to be, probably out of all, the most spectacular because the production is really insane. So I’m very excited. It’s really incredible. I mean, the building itself is really iconic and very special. But when you come with the production I come with, it’s really impressive”.

How do you think the industry is going to have to navigate its way forward? How will it adapt and change to make it a success?

“Listen I hope we don’t have to adapt because very fast everybody will be vaccinated. I can have real concerts again. But I do think now this is the only thing we have. I think this is, in the future, going to remain as a possible option. I’m speaking with many people about also virtual reality shows. This is developing a lot. I think it’s interesting and I see I have kids and they hang out with their friends in video games. You know they play video games and they put a helmet on and speak to their friends. This made me think a lot about the new generations”.

You’ve been very vocal about being against anti-vaxers. Why do you think it’s important for people to go out and make sure they get vaccinated in the current climate?

“Well I don’t see any other choice, to be honest. So I feel very lucky because I’m in Dubai and I was able to get it. So I did a vaccine. This is a very personal choice. I’m not trying to force people to do what they don’t want to do, but I don’t see any other way for the world. What are we going to do? What else are we going to do? We can’t just stay like this forever and let the economy die. This is going to destroy the world. I’m from France, which was a country of revolution, one of the countries with the most resistance at the beginning. I see the numbers are now changing and more and more people want to get vaccinated, which is good news in my opinion”.

You recorded ‘Let’s Love’ with Sia during lockdown. How was that? How did the lockdown affect you?

“Well, you know, like everybody else, it’s obviously not a good thing. But at the same time, I’m trying to make the best out of every situation. And I have to say from a creative point of view, it was very good. It is still very good because I’m spending more time at home and less on planes. And that gives me more time to make music, you know”.

You’re originally from Paris, but you’ve made Dubai your home over the last few years. Why do you enjoy your time in Dubai?

“Well honestly, at the moment, this is probably the best place in the world, you know, and it’s still real life. It’s the safest place I’ve seen ever. And this is nice and also, I think on the COVID thing, they’ve been doing good. So I hope it stays like this, the future will say. But so far, they have maintained a nice social life and at the same time safety. So it’s a good balance”.

You’re known internationally as the grandfather of electronic dance music, but perhaps you’re less of a grandfather?

“You know, I hate this because someone came up with the ‘godfather of dance music’ and I don’t know how it became the grandfather. I’m like, am I like this old really? OK, why not? But yeah, I dedicated my life to dance music for sure. From funk to house to hip hop to EDM, you know, however you want to call it. It’s been my life making people dance”.

You started out on the club scene in Paris, then you transferred all your skills and released records all around the world. What has been the biggest change for you in the industry since back then?

“Oh, wow. That’s a huge change. First, when I started, there was no such thing as a famous DJ, it just didn’t exist. So, you know, I could never have imagined that one day we would sell tickets with our name on and even less that we would fill a stadium. That was impossible to imagine”.

What does the future hold?

“I’m looking at the future. Like I was saying, I think all virtual reality is very interesting. And most of all, I think that when this is over, it’s going to be the biggest party year of all time. So I’m just ready to get back on the road and, you know, go shows back to back every day because I miss it so much”.