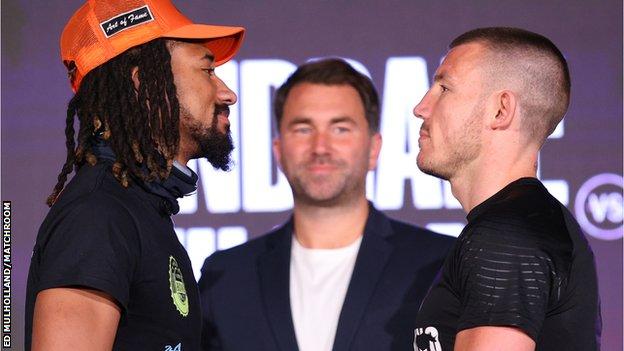 Liam Williams (right), from Clydach Vale, will be the first boxer from the Rhondda to appear in a world title fight since Tommy Farr challenged Joe Louis in 1937

Liam Williams says his "mind-blowing" shot at WBO world middleweight champion Demetrius Andrade can change his life if he can secure an upset win.

Williams has won seven successive fights since back-to-back losses to Liam Smith in 2017 to earn his chance.

"I believe this is my time, I am coming away with that belt," Williams told the 5 Live Boxing Podcast.

Mandatory challenger Williams is an underdog against Andrade, who has claimed titles in two weight divisions, but says he is fully confident he will win and become Wales' 13th world champion.

"This is a big chance I need to grab with both hands and I am going to, you are going to see an impressive performance from me on Saturday," Williams said.

"I feel like most of the country [Wales] is behind me. You do get one or two haters, but the majority are behind me and have been following my journey back from the setbacks and stuff and a lot of them appreciate how hard I have worked, and how much time and effort I have put into it.

"Sometimes I have to sit back and pinch myself. I was a young kid watching people like myself do this kind of thing and I was amazed by it.

"So to be here here now, making everyone proud, making the country proud, it is unbelievable. It is mind-blowing, to be honest with you.

"If I win this I'll be a massive star in Wales and in Britain. I'm just very excited, it's a big opportunity and for me to win this it's going to be life-changing for me." 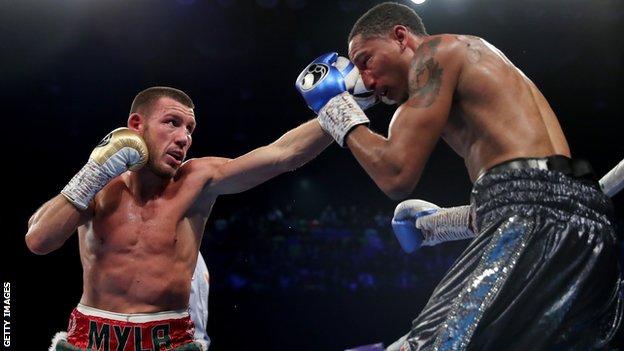 Liam Williams stopped Alantez Fox in December 2019, a fighter who took Demetrius Andrade the distance in 2017

Williams' route to the world stage has not been an easy one, with his journey filled with more troughs than peaks.

In 2014, following hand surgery that had not fixed a problem Williams was suffering with, he was told he would have to retire. He was 22. His then trainer, Gary Lockett, told him to seek a second opinion.

"I had another operation and I've never looked back," Williams said.

However, the next years were anything but easy.

He suffered back-to-back losses to Smith in 2017, the first after suffering a horrendous cut, the second on a majority decision in a contest many feel Williams won.

However, those losses were nothing compared to what he endured the year before.

Williams was present when his close friend and stablemate at the time, Nick Blackwell, was put into an induced coma after a loss to Chris Eubank Jr in April 2016.

He was also at ringside six months later to support another stablemate, Dale Evans, in a fight in Glasgow that saw Evans' opponent Mike Towell suffer a brain injury that resulted in his death.

"It's unusual for one terrible incident like this to happen in your career," Williams told BBC Sport Wales. "But to happen twice and with the second happening six months later? It was horrible and it really got to me."

Williams sought a fresh start in 2018, splitting with friend and long-time trainer Lockett to link up with Dominic Ingle.

It means Williams has been dividing his time between Sheffield and Wales for the past three years, missing time with his fiancee and daughter, but his results since – with seven straight wins – have spoken volumes.

Williams feels his time has arrived, even after enduring a year-long wait for this fight because of Covid-19 restrictions.

"I respect Andrade. He has to be respected for what he has done – he has achieved a lot," he added.

"But he doesn't want to fight me. I'm a mandatory challenger, he wants the bigger names. This is great timing for me.

"I have prepared long and hard. I couldn't be any more prepared. Now is my time."

'Me, afraid? Of a guy who couldn't beat Liam Smith?'

Andrade, a world champion at light-middleweight and middleweight who has won all 29 of his fights, including last time out against Luke Keeler, has been clear that he is unimpressed with the calibre of his mandatory opponent – as evidenced by his exchange with BBC boxing pundit Steve Bunce.

"It's not who I wanted to fight, but here we go. I am here, this is what I have to do, put the bricks on him real quick and send him on his way," Andrade told the Costello and Bunce podcast.

Andrade, who has constantly belittled his opponent in the build-up and who says his next fight will be in WWE against Baron Corbin,external-link says he has dismissed Williams' chances based on his career record.

"Everyone says he is a tough guy. Well I am the greatest in the world," Andrade added.

"I don't understand why people say he is tough. Why isn't he the champion? He lost twice against Liam Smith and how tough is Liam Smith?

"Why am I going to be afraid of a guy who couldn't beat Liam Smith?

"I'm not underestimating him, but he had two losses to Liam Smith and Liam Smith is not the toughest."