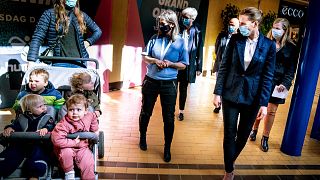 Denmark’s health authority announced on Monday that the country has decided to drop Johnson and Johnson’s COVID-19 vaccine from its rollout.

A statement read: “The Danish Health Authority has concluded that the benefits of using the COVID-19 vaccine from Johnson & Johnson do not outweigh the risk of causing the possible adverse effect, VITT, in those who receive the vaccine. Therefore, the Danish Health Authority will continue the Danish mass vaccination programme against COVID-19 without the COVID-19 vaccine from Johnson & Johnson.”

The decision was not an easy one to make, it stressed, particularly after also having dropped AstraZeneca’s vaccine.

“Taking the present situation in Denmark into account, what we are currently losing in our effort to prevent severe illness from COVID-19 cannot outweigh the risk of causing possible side effects in the form of severe blood clots in those we vaccinate,” the statement went on.

It added that the decision “will significantly affect” the vaccination rollout for people aged between 20 and 39, which will be delayed by up to four weeks.

“The remaining target groups will experience a delay of about one week, as we will be getting large amounts of other vaccines,” it went on.

“This decision will, of course, have consequences for those who now have their vaccination postponed. For example, they will have to wait longer for the corona passport that so many of us are looking forward to getting. Age is the main risk factor for severe illness from COVID-19, and these are younger citizens who are not at risk of becoming seriously ill,” it said.

As of May 1, more than 1.3 million of the country’s 5.8 million population had received at least one dose of the vaccine, according to Our World in Data.

The Johnson & Johnson vaccine — also known as Janssen — in March became the fourth jab to be approved for use across the European Union by the European medicines Agency (EMA) after Pfizer/BioNTech, AstraZeneca/Oxford University and Moderna.

But the American pharmaceutical delayed its deliveries to the 27-member bloc after reports of serious blood clots emerged in the US where more than 6.8 million people have received at least one shot.

The EMA launched a review last month but said it remained of the opinion that “the benefits of the vaccine in preventing COVID-19 outweigh the risks of side effects.”

It emitted a similar view of the AstraZeneca vaccine after investigating reports of blood clots. Still, several member states including Denmark and Norway have removed the Anglo-Swedish vaccine from their rollouts.

Other member states have restricted the use of the AstraZeneca vaccine to older age groups, which were found to be less likely to develop blood clots. French authorities have already announced that they planned to proceed with the Janssen vaccine for people aged 55 and over.

So far, EU countries have received just over 1 million doses of the vaccine, according to the European Centre for Disease Prevention and Control.