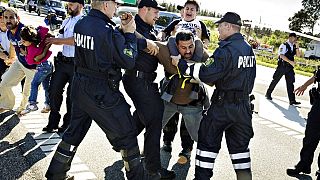 MPs in Denmark have passed a law that will see asylum seekers sent to countries outside of Europe to have their cases considered.

The legislation — which was approved by 70 votes to 24 on Thursday — is the latest anti-migration measure passed by the Danish parliament and aims to discourage migrants from ever setting foot in the country.

Under the law, which was proposed by the Social Democrat-led government, Denmark would be able to transfer asylum seekers to detention centres in partnering countries, potentially outside Europe. Their cases would then be reviewed from those countries.

The United Nations’ refugee agency, UNHCR, had warned against “exporting” the asylum process, with assistant high commissioner Gillian Triggs warning that “such practices undermine the rights of those seeking safety and protection, demonise and punish them and may put their lives at risk”.

The bill’s passage comes as part of a widespread crackdown on immigration in Denmark that has seen a tightening of immigration rules over recent years.

Last month, Copenhagen signed a memorandum of understanding with Rwanda about immigration and asylum issues. At the time, the government played down suggestions its asylum seekers could be sent to the African country as “speculation”.

But the memorandum itself was clear about Denmark’s long-term goals.

“The vision of the Danish Government that the processing of asylum applications should take place outside of the EU in order to break the negative incentive structure of the present asylum system,” it read.

Does Denmark want to send its refugees to Rwanda?

UNHCR global spokesperson Shabia Mantoo said in a statement sent to Euronews that the agency “remains firmly opposed to national initiatives that forcibly transfer asylum-seekers to other countries and undermine the principles of international refugee protection”.

“UNHCR is very disappointed that Denmark is continuing to pursue this vision, despite the serious concerns we have raised,” Mantoo said.

“We will continue to encourage Denmark to build on its active participation in global refugee cooperation and to help find common European solutions to the challenges facing Europe in terms of both the reception and protection of refugees,” she said.

In an interview with Euronews, Bill Frelick, director of Human Rights Watch’s Refugee and Migrants Rights Division, said the legislation’s passage was a “slap in the face” to governments who have agreed to “greater responsibility sharing” under the UNHCR’s Global Compact on Refugees.

Branding the bill’s passage a “regressive step” in international efforts to protect refugee rights,” Frelick said it also represented a “shirking of responsibility”.

“By sending people to a third country, what you are essentially doing is taking what is a legal right and making it a discretionary political choice,” he said.

Charlotte Slente, secretary-general of the Danish Refugee Council, shared in those sentiments, asserting that “the idea to externalise the responsibility of processing asylum seekers’ asylum claims is both irresponsible and lacking in solidarity”.

“We have repeatedly called on the Danish Members of Parliament to reject this bill. Similar models, such as the Australian model or the so-called ‘hotspots’ on the Greek islands, have involved serious incidents of detention, physical assault, slow asylum proceedings, lack of access to health care and lack of access to legal assistance,” she said.

Slente added in the statement that it is unclear how a third country reception centre could be adm inistered as Denmark has a “legal responsibility” to safeguard the rights of asylum seekers and refugees.

“It has also been one of our main concerns regarding the bill, which has now unfortunately been passed without adequate consideration,” she said.

‘This isn’t Danish’: Syrian refugees in Denmark react to claim it’s safe for them to go home

Amnesty International’s European Institutions Office condemned the news on Twitter, calling the development a “gross and shameful abdication of responsibilities from Danish politicians”.

“Denmark, a rich country, should not try and pay its way out of inalienable international obligations to people seeking safety,” the organisation said.

“The whole idea of Denmark just saying ‘no’ to its international obligations is really outrageous, so we are really disappointed today,” she said.

Denmark, Blinkenberg said, would have an “obligation” to monitor the care provided to asylum seekers and to determine that their human rights were being protected.

She questioned how the country would go about monitoring the care provided to asylum seekers and how Denmark would be able to “ensure that asylum seekers have access to a lawyer, to a complaints system, to a doctor” and other resources.

Dr Nikolas Feith Tan, a senior researcher at the Danish Institute for Human Rights focussing on refugee law told Euronews that even if Denmark moves forward with its plan to house asylum seekers outside its borders, it cannot “export its human rights responsibilities”.

“What that means is that even though…asylum seekers and refugees will be transferred to another country, Denmark still has a responsibility for their rights in that third country,” he said. “We’re talking about a legal responsibility.”

Tan said that if Denmark failed in its responsibility to ensure that anyone transferred to another country is not exposed to torture or inhuman treatment, it would be “in violation of its international obligations” and could face repercussions in Danish courts or the European Court of Human Rights.

While he acknowledged that transferring asylum seekers abroad may not be a breach of international law, he said the policy, if implemented, would represent “a fundamental shift in how the international protection system works”.

The new legislation, he said, “has shifted that idea of territorial asylum”.

Comparing the law with similar efforts in Australia, Tan noted that in the Australian case claims of “severe human rights violations” have been widespread.

He said that more recently, in the US, the Trump administration transferred asylum seekers to Guatemala for assessment of their protection needs, an arrangement which was later terminated by President Joe Biden.

Pursuing a similar approach to immigration, Tan said, is a “risky” move for Denmark. However, he said he did not believe other EU member states would be quick to follow suit.

“Denmark…has opted out of much of the EU law asylum system,” he said. “So, the fact that Denmark can do this does not mean that other EU countries can”.