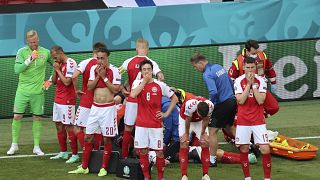 Denmark’s match against Finland at the European Championship was dramatically suspended minutes before halftime on Saturday after Danish midfielder Christian Eriksen collapsed on the field.

A shocked silence descended over the stadium in Copenhagen as Eriksen, one of Denmark’s biggest football stars, fell to the ground face-first after receiving the ball.

His teammates called for medical attention and surrounded him in a protective cordon. Eriksen’s partner, Sabrina Kvist Jensen, rushed to the pitch and was comforted by other Danish players.

Eriksen, who plays for Inter Milan, was stretchered off the pitch to a standing ovation from both sets of f ans, with those on the Finnish side chanting ‘Christian’ while the Danes replied with ‘Eriksen’.

The Danish football federation later confirmed on Twitter that Eriksen was a”wake and is undergoing further examinations at Rigshospitalet,” a hospital in Copenhagen.

UEFA said both teams had held an emergency meeting before deciding to continue playing. The players came back out onto the field at around 7:15 p.m. CET to a huge ovation as they started warming up for a second time.

Finland ultimately won the game 0-1 with a goal early in the second half. Despite it being Finland’s first appearance in a major tournament final, the players did not celebrate the goal.

In the UK, where Eriksen spent seven years for Premier League side, Tottenham, social media users were angered by the close-up footage of the player on the floor and of his distraught wife.

Football pundit Gary Lineker later tweeted that the decision to film the incident was not the BBC, which is broadcasting most of the Euro 2020 matches in the UK.