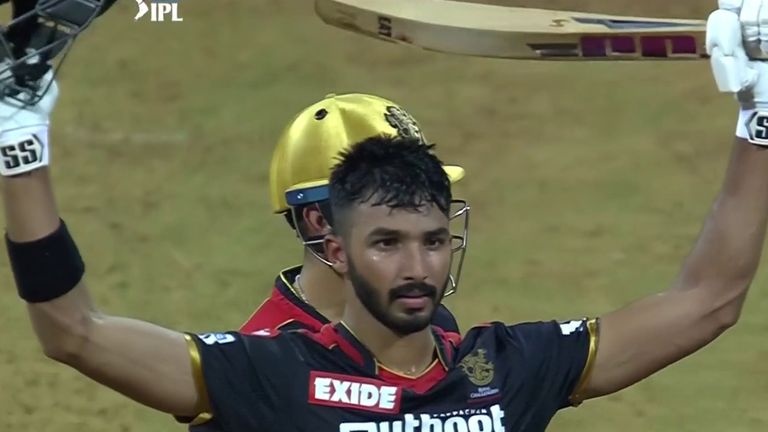 Highlights from the IPL clash between RCB and Rajasthan Royals as 20-year-old opener Devdutt Padikkal struck a stunning, maiden IPL century in a 10-wicket hammering.

Royal Challengers Bangalore’s 20-year-old opener Devdutt Padikkal struck a stunning, maiden IPL century to fire the team to a fourth-straight win to open the 2021 tournament as they crushed Rajasthan Royals by 10 wickets.

The left-handed youngster smashed 11 boundaries and cleared the ropes on six occasions in a relentless, yet effortless display of hitting which saw RCB to their 178-run target in 16.3 overs.

Padikkal shared in an unbroken partnership with Virat Kohli (72no off 47), who contributed just 25 to their initial century stand before racing through the gears through to his first fifty of this year’s tournament, becoming the first batsman to score 6,000 IPL runs in the process.

Victory sees Bangalore jump back to top spot in the table, above Chennai Super Kings, while Rajasthan in turn drop to the basement by way of an inferior net run-rate compared to Punjab Kings, one of four teams to have won just one of their opening four games.

The Royals had appeared in trouble early on in the contest when slipping to 43-4 inside their opening eight overs after being inserted by RCB.

Mohammed Siraj (3-27) did the damage early on, dismissing danger man Jos Buttler for eight, bowled, and David Miller for a duck, out lbw after a Kohli review.

Rajasthan skipper Sanju Samson (21 off 18) cracked one glorious six before falling to the very next ball, tamely chipping a Washington Sundar delivery to Glenn Maxwell at short midwicket.

Shivam Dube (46 off 32) and Riyan Parag (25 off 16) repaired the Royals innings, putting on 66 for the fifth wicket, and Rahul Tewatia tonked 40 from 23 deliveries down the order once the partnership was broken, but it only served to highlight how good a batting track it was they were using at the Wankhede Stadium in Mumbai.

And that fact was emphatically proven as Padikkal and Kohli reeled in their score of 177-9 in no time at all. Kohli struck the first of three sixes for his innings in Shreyas Gopal’s opening over, while the fifty partnership between the pair came up in the sixth over as 59 runs were reaped from the opening powerplay – Padikkal peppering the boundary with regularity.

The youngster reached his half-century, off 27 balls, in the eighth over, while in the ninth he smashing back-to-back sixes out of the screws off Tewatia. By the mid-way point of the run-chase, Padikkal had raced on to a score of 80, with RCB cruising at 107-0.

That’s precisely when Kohli then came into his own, striking each of the next four boundaries scored and two maximums to briefly cast doubt over the possibility of a Padikkal century, with his partner now on 90 with only 19 runs left required.

But Padikkal would not be denied and had his hundred moment to start the 17th over, drilling Mustafizur Rahman for four through extra cover, and then three balls later a fourth-straight victory for RCB was secured.