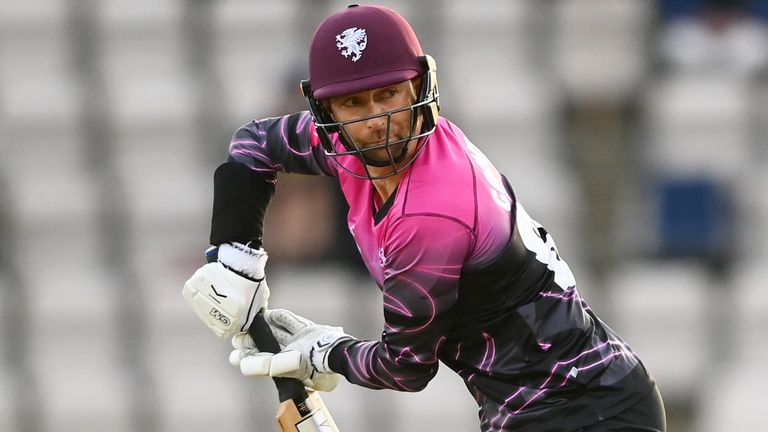 Somerset sealed a place in the Vitality Blast quarter-finals as they hammered Glamorgan by 74 runs at Sophia Gardens.

New Zealand run-machine Devon Conway batted Somerset’s full 20 overs for an unbeaten 70 from 52 balls out of a total of 181-5 as Glamorgan’s bowlers struggled at both ends of the innings.

In between, Roman Walker impressed with figures of 3-15 from his four overs but Glamorgan’s batsmen were nowhere near as good as they were bowled out for just 107 with First Minister of Wales Mark Drakeford watching on.

Jamie Smith and Laurie Evans kept Surrey‘s campaign alive as they beat Gloucestershire by seven wickets on the final day of the Cheltenham Festival. Scorecard: Gloucestershire vs Surrey

Surrey faced a must-win game at the College, their final fixture, and knocked off a chase of 178 with 10 balls to spare.

Smith set things up with 60 from 47 balls and Evans took his side to the verge of victory with 58 from 36.

Gloucestershire will get another chance to seal a quarter-final spot in their final game against Somerset at Taunton on Sunday but they will need to raise themselves with defeat here coming two days after their Championship hopes were ended.

Middlesex posted their lowest Vitality Blast score of just 80 as an inexperienced Kent side recorded a thumping 77-run victory at Lord’s. Scorecard: Middlesex vs Kent

Kent named a team containing seven debutants following a coronavirus outbreak and one of them, Elliot Hooper, took his chance in style by taking 3-24.

Fellow new boys Matthew Quinn, Safyaan Sharif and Marcus O’Riordan were also among the wickets as Middlesex failed to reach their previous worst tally of 92 made against Surrey at Lord’s eight years ago.

Kent had posted 157-8 after Harry Finch top scored with 47 and Heino Kuhn made 42, while Blake Cullen took 4-33 in a losing effort for the hosts.

Essex looked on course to chase down their 172-run target after England batsman Dan Lawrence and Tom Westley put on 80 for the second wicket, only for Hampshire’s bowlers to claw back control as the Eagles lost their nine wickets for just 68 runs to be bowled out for 153.

Vince, fresh off his maiden ODI hundred for England, struck 14 fours and three sixes before falling with victory in sight – dismissed hit wicket off the bowling of Ollie Robinson.

Finn Allen’s explosive 66 set Lancashire up for a thrilling six-run Vitality Blast win over Durham at Emirates Old Trafford which keeps them on track for the quarter-finals. Scorecard: Lancashire vs Durham

Durham, now out of contention with this defeat, raced to 78-0 after six overs in reply as David Bedingham made 50 off 24.

Later, Sean Dickson’s 53 off 33 took the target to 15 off the last over, which Danny Lamb defended as the visitors finished on 193-5. A Lancashire home win over Yorkshire in their final North Group fixture on Saturday will secure qualification.

Josh Inglis and Arron Lilley were joint top-scorers with 42 and though the Foxes suffered some jitters after needing 35 from 25 balls and six off the last over, Naveen-ul-Haq hit back-to-back fours off former Leicestershire fast bowler Zak Chappell to get them over line after Steven Mullaney had taken 3-33 and Calvin Harrison 2-21.

The Foxes had dismissed Nottinghamshire for 173 in 19.2 overs, Naveen picking up 3-33 and Colin Ackermann 3-35. Joe Clarke hit 57 in 27 balls and Ben Duckett 45 off 27 but the Outlaws lost their last six wickets for 22 runs, Lilley holding four outfield catches.

Victory would have secured the Rapids a quarter-final place but they now have work still do to, against Leicestershire Foxes at Leicester on Sunday. The Bears, meanwhile, must beat Northamptonshire Steelbacks at home and hope that other results go their way.

After choosing to bat, the Bears made 169-5 thanks to Sam Hain’s classy unbeaten 83 from 53 balls which included eight fours and two sixes.

Bizarrely overlooked by England’s selectors recently, Hain batted beautifully in an unbroken sixth-wicket stand of 106 in 67 balls with Carlos Brathwaite, who made a rapid 52 not out with two fours and three sixes.

The Rapids reply fell short at 152-6. Jake Libby top-scored with 36 from 34 balls, but the pursuit never properly escaped the shackles imposed by the spin of Danny Briggs (2-18).

Our live Vitality Blast coverage continues with the Roses clash between Lancashire and Yorkshire, live on Sky Sports Cricket from 4.45pm on Saturday.