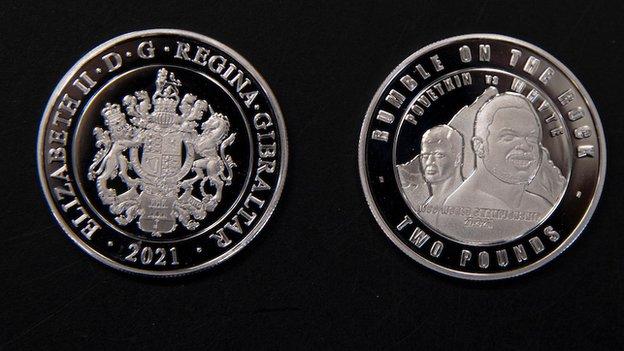 Dillian Whyte and Alexander Povetkin feature on a new £2 coin issued by the government of Gibraltar.

The British heavyweight and Russia's Povetkin are etched on the coin to commemorate their rematch which takes place in Gibraltar on 27 March.

"It is a great honour for someone like me to go down in history as the first boxer, and first black man, to feature on sterling currency," said Whyte.

"There's a lot of black people that have done much bigger things than me."

He added: "It's a really special occasion for me and my family. This is why we should never give up on children that come from disadvantaged and troubled backgrounds.

"I can't believe that someone that comes from where I come from and has been through what I've been through can be honoured in this way."

While Gibraltar – an overseas British territory – uses the pound, the island's currency is not used in the United Kingdom.

Campaigners have asked the UK government to feature more BAME faces on its currency and Chancellor Rishi Sunak asked the Royal Mint to come up with new designs last year.

BAME faces have featured on commemorative coins but not on UK legal tender currency.

The first coin featuring Whyte and Povetkin was struck at Tower Mint in London on Tuesday.

Povetkin, 41, stunned Whyte with a fifth-round knockout when they met in August.

The winner of their rematch will be well positioned to contest one of the heavyweight division's four world-title belts but may have to wait for proposed fights between current champions Anthony Joshua and Tyson Fury to take place first.