On Saturday night British heavyweight Dillian Whyte will be hoping to banish the memories of losing to Alexander Povetkin over seven months ago, by beating the Russian and reclaiming his WBC interim title.

In his second column for BBC Sport, he talks about what it was like to be knocked out, bringing in Lennox Lewis' former coach, his 'Rumble on the Rock' rematch in Gibraltar and the prospect of fighting the winner of Anthony Joshua v Tyson Fury. 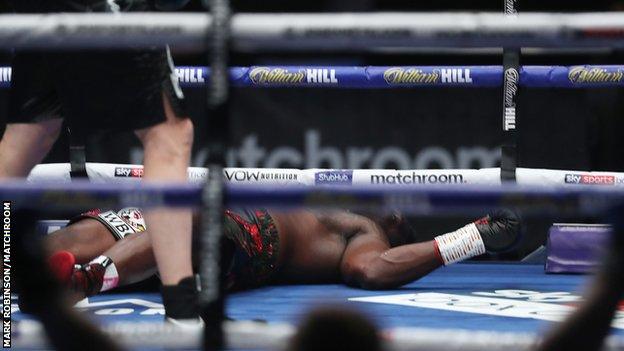 I've now been at my training camp in Portugal for over a year. I've had to be careful of not overtraining, so sometimes I'm told to take a couple of days off, which I find hard. It's been difficult not seeing my family, but mentally I'm a tough person, so I've just got on with it.

People say I was the favourite going into the first fight with Povetkin – but I think it was a 50/50 fight.

I couldn't do any sparring or head contact for about six weeks. Then I had a scan and a doctor checked me over. The British Boxing Board of Control are very good with the after-care.

If I'd won that fight, I know I would have been the mandatory challenger for Fury, who's now fighting Joshua for all four world heavyweight belts, but I don't allow myself to think like that. Boxing is one fight at a time, you can't plan too far ahead because you don't know what's going to happen next.

In November the Povetkin rematch was cancelled with less than three weeks' notice, because Povetkin was in hospital with Covid-19. I was obviously sorry to hear he had it, but I was also very annoyed, because I was ready.

Rumble on the Rock 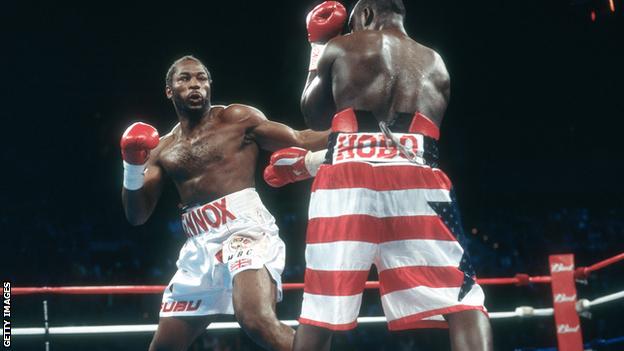 Whyte has brought in Lennox Lewis' former coach Harold 'The Shadow' Knight, who helped Lennox to two rematch victories, including this one against Hasim Rahman in Las Vegas in 2001

Fighting in Gibraltar is going to be fun. I'm in boxing to achieve things, to inspire people, and entertain different fans, so I'm grateful to be in a position to be able to do that.

For this fight, we've brought in Lennox Lewis' former coach, Harold 'The Shadow' Knight. Harold helped Lennox to two rematch victories. He brings experience, calmness and confidence to the camp and has helped me to be more consistent, so I'm grateful to have him around. Boxing is a team sport and he's just integrated well into our team.

Preparing for a rematch is just business as usual for me. For some boxers it can affect them and they start doubting themselves. But not me. I'm just glad I'm back doing a lot of the old things that that I haven't done for a while. Things have gelled again – and you'll find out on the night.

Everyone feels pressure, but I just deal with it. Yeah I smile and laugh a lot, but there's a lot of violence inside of me. I just distribute it in the right way as and when I know I need to. Because I'm a big strong guy I don't need to walk around and be a prima donna. I'm very respectful and easy going until someone upsets me.

This is 100% the biggest fight of my career so far. It's straight after a loss and I'm going into an immediate rematch. I'm not nervous though. I'm excited. This is just another fight and I've been fighting my whole life. I'm a warrior. Everyone who knows me knows I'm a warrior. I'm not worried about losing. My mind is just focused on putting the wrong right. 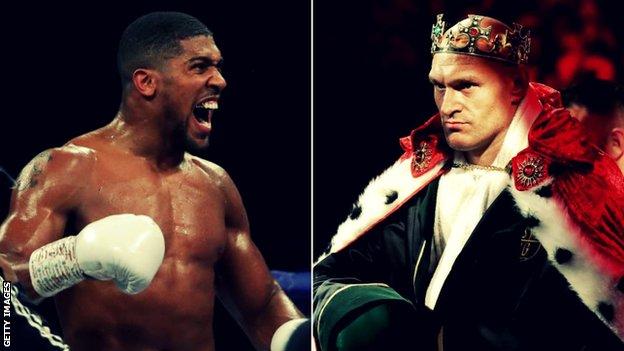 Whyte on Joshua v Fury: "In my opinion it's a 50/50 fight because they have a lot of similarities. I can't wait for them to fight"

If I beat Povetkin then that makes me the mandatory challenger again, but as Fury has signed to fight Joshua, I'm going to have to wait.

I'm obviously excited at the prospect of fighting one of them for four belts. They're the best in the world and I'm in boxing to fight the best. But if they sign for two fights, I'd probably have to wait for a year to fight them. I wouldn't sit around though – I'd fight someone else in between. I was number one challenger before, but I still took dangerous fights.

Joshua is strong, has good speed and he's shown resilience coming back when he's been hurt against other fighters. Against Andy Ruiz he got knocked out, but he showed versatility second time around in the rematch, not taking any chances.

Fury is very slick, has good reflexes and good movement for a big guy, but I'm not sure if he's physically stronger. But he is taller and weighs more and has got more reach. He's one of those guys that you think he's about to lose a fight, but then he comes back. He's overcome adversity and he's beaten guys in fashions that you didn't think he would have done. He draws with Deontay Wilder and then he says he is going to knock him out next time and he does. He went from a backfoot defensive fighter to a front foot offensive fighter.

In my opinion it's a 50/50 fight because they have a lot of similarities and they can both adapt and modify their styles depending on their opponent, so it's very difficult to say who will win. It could be really exciting or it could be really boring where they try to be too technical and one is waiting for the other. I can't wait though.