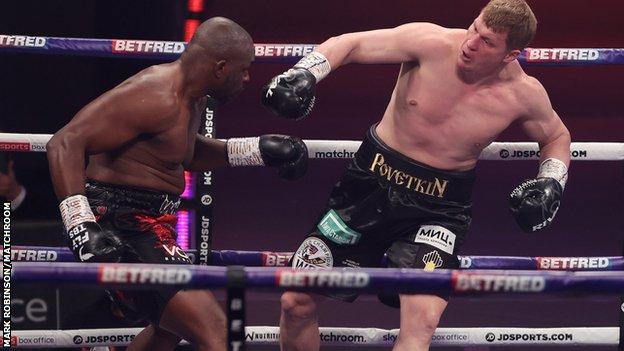 Dillian Whyte kept alive his hopes of a heavyweight world title shot by emphatically gaining revenge over Alexander Povetkin with an impressive knockout win in their rematch.

The Briton, 32, showed smart timing from the off in Gibraltar before a decisive attack in the fourth round.

A right hand sent Povetkin backwards, another sent him into the ropes and a left hook floored him heavily.

He found his feet but was rightly stopped to suffer his third loss.

Only Anthony Joshua and Wladimir Klitschko had previously beaten Povetkin in 39 fights.

Some questioned if Whyte was right to take an immediate rematch after a horrific knockout defeat by the Russian in August but after four well-crafted rounds, BBC Radio 5 Live commentator Mike Costello said his performance would "reverberate" around the heavyweight division.

"I am just sad I didn't get it finished in the first round," said Whyte. "He is a tough guy but I felt I could have finished it early.

"I want the world title."

Revenge, risk and a wait 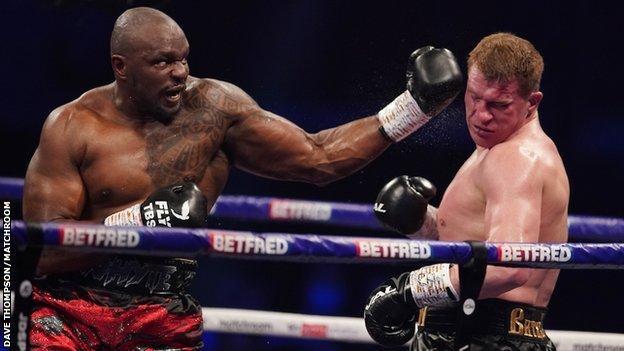 Whyte will likely need to wait some time for a world title shot if Joshua and Tyson Fury – who hold all four major belts between them – finalise the details for two successive bouts.

August's loss to the wily and experienced Povetkin ultimately cost Whyte his position in the queue for a title fight and a second defeat would have all but wiped out his status as an elite name in the division.

Such was the significance of the bout for his career, late moves were made to switch it to Gibraltar so that Whyte could avoid the disruption of a 10-day quarantine in a Covid-secure UK fight bubble.

Private planes were chartered for stakeholders and Povetkin. Whyte stayed on a super yacht close to the fight venue. Those attending from the UK signed up to a handful of Covid-19 tests to make hopes of using the obscure fight base become a reality.

Whyte agreed to a cut in his fight purse to deliver the venue switch and when the lights dimmed at the Europa Point Sports Complex he played his part perfectly in front of 500 fans.

In a robe sporting 'RIP Hagler' in tribute to the late middleweight 'Marvelous' Marvin Hagler, Whyte bounced on the spot as his ring walk music played, seemingly bristling with energy as the chance to right wrongs drew closer.

From the bell he kept Povetkin's fierce power at distance and his rival – who contracted Covid-19 late in 2020 – looked shaky on his legs early on, losing his balance even as punches flew past his head.

Whyte crisply landed a jab-right hand combination in the second, and he drove home a well-timed counter right in the third before the fourth saw him ruthlessly strike – the decisive left hook delivered with an arrogance befitting of a final blow.

Whyte has admirably taken risk after risk in choosing opponents. It may still be true that his risk in facing Povetkin in August proves costly to his hopes of landing a title shot.

For 41-year-old Povetkin, retirement now surely looms while for Whyte there are at least exciting possibilities on the horizon again.

This manner of this win shows he is a worthy contender. He has moved on from a brutal setback in the most emphatic way possible.

'Relief and open doors' – what they said… 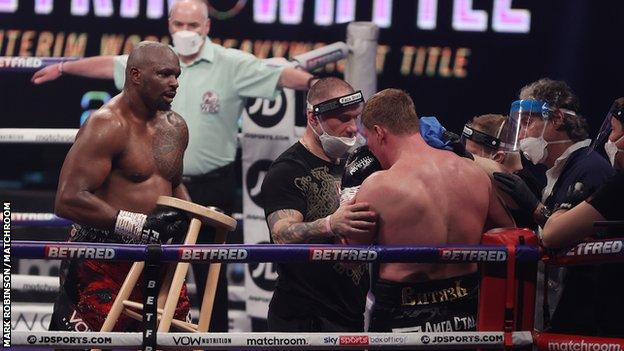 Promoter Eddie Hearn speaking to Sky Sports: "His world championship dreams were on the line tonight. That was a lot of pressure tonight. Tonight was about getting him back on track. He wasn't going to be denied.

"He man-handled Povetkin, he battered him from pillar to post. We are back where we wanted to be. The aim remains the same, for Dillian to have a shot at the world championship."

BBC Sport boxing correspondent Mike Costello: "The key emotion for Whyte will be relief because of all those doors being closed if he didn't win this evening, in the way that they have now closed for Povetkin.

"This opens up a whole range of opportunities. Yes, he might have to wait for that world title chance but he's used to that. At least now he is back in a position where he can barter on the back of the performance that he's produced tonight.

"He is now once again a significant factor in the heavyweight division."

Natasha Jonas, first female British Olympic boxer, on BBC Radio 5 Live: "The pressure of needing to win and the expectation weighs differently on different fighters and Dillian proved tonight that he can do it."

British trainer Peter Fury on BBC Radio 5 Live: "It was a faultless performance. Povetkin got beat – it wasn't because he was an old man – he got beat fair and square. Whyte has a tremendous left hook, that would have put anyone over."

Another trainer, Joe Gallagher, said he would like to see Whyte face British heavyweight Joe Joyce next

To use comments you will need to have JavaScript enabled.
94 commentsShowLatestOldestHighest RatedMost RepliedS

04:12Povetkin vs Whyte trilogy in the making?00L

03:50Good win, I don’t think he has much to offer for AJ or Fury though. But he has to get a shot eventually.10S

03:47Great thing about Whyte is he’ll not back away from making a fight happen.

If Joshua and Fury are going to be tied up with each other for a while then there’s an ongoing battle for who’s next. Anyone who’s in that mix could end up fighting Whyte next, and there wouldn’t be an overwhelming favourite either way.10N

03:34Good win and a brave one , He knew Povetkin could hurt him but took the fight to prove to himself that he can still compete at that level.10A

03:01Only one fight in this division to care about…AJ v Fury. Fighters in their prime01T

02:38Whyte found success tonight with discipline and a bit of patience – 2 elements he often seemed to fall short on. He got the potent combination of accuracy, timing and power right and kept to a basic combo of jab and right cross to soften Povetkin up. The finish was solid but in part due to an opponent who’d had his golden years and is better off hanging up his gloves. Whyte vs Michael Hunter next11G

03:03to goochs 333"Both has been bums. Would nt pay 10 p for this fight. Never mind ppv"Funky replied: You go in the ring with them and show these bums up then80More replies (1)downD

He had to take the rematch, as for what’s next, aj is going to be busy beating fury and will likely dodge Whyte, so he’s gonna have to fight the loud mouth in America, kick his backside then fight for a vacant title that aj will leave after he retires in two fights time26V

02:37to dependabledennis-606_must_stay"So much negativity.He had to take the rematch, as for what’s next, aj is going to be busy beating fury and will likely dodge Whyte, so he’s gonna have to fight the loud mouth in America, kick his backside then fight for a vacant title that aj will leave after he retires in two fights time"Vedrex86 replied: Been on the strong stuff pal?11E

02:22I found it strange Whyte wanting to fight povetkin for a 3rd time in his interview. Don’t see the point or purpose of that when he should be looking forward towards fighting contenders and title shots, not fighting 41 year olds past his sell by date !

Wilder, Joyce, Usyk, Dubois and Andy Ruiz are all possibilities.73M

02:42to e3sa"I found it strange Whyte wanting to fight povetkin for a 3rd time in his interview. Don’t see the point or purpose of that when he should be looking forward towards fighting contenders and title shots, not fighting 41 year olds past his sell by date !Wilder, Joyce, Usyk, Dubois and Andy Ruiz are all possibilities."Mia San Mia replied: It’s a draw,1-1, has to be a third fight13T

02:20Tyson Fury is going to breeze the scene for a good while if he stays on the ball.

I think Fury is underestimated because all around him are overestimated in the division.

Fury is actually one of the true heavyweight greats. Not his fault he is surrounded by chumps.211U

02:15Povetkin should’ve retired after the first fight the guy has nothing to fight for anymore and deserved to end on a high he’s had a great career but is too old now. Tony Bellew is also a clown 🤡 who needs to calm down Povetkin is past it it’s 1/1 Whyte is not amongst the best because he was the fastest to KO him, AJ fought a much younger and sharper AP and Wlad fought a prime AP no comparison…81G

02:09Congratz to Whyte on winning but the performance wasn’t great. The first round in particular he was loading up far too much, over-extending on his punches and leaving himself open to counters. Just bizarre tactics after the first fight. He’s going to need to fight much smarter, setting things up properly, against better opposition. Povetkin looked totally shot tonight though so he got away with it24E

02:09Excellent performance and comeback from Whyte. This now opens up options for him going forward. I believe over the the years Whyte has become a solid all round fighter deserving of a world title shot. At the same time we have to look at reality and that is Povetkin, although dangerous as he is a warrior, this version of him was an old man at the end of his career. Would love to see him woop wilder41G

02:09I have to admit to being wrong on this one. I didn’t see Whyte coming straight back after such a knockout. Well done to Whyte. Proved me wrong and respect to what you’ve achieved tonight. 👌👌👌43B

02:06Watching boxing with extra sound due to covid is a scary reality!11More commentsBack to topunknown
Source