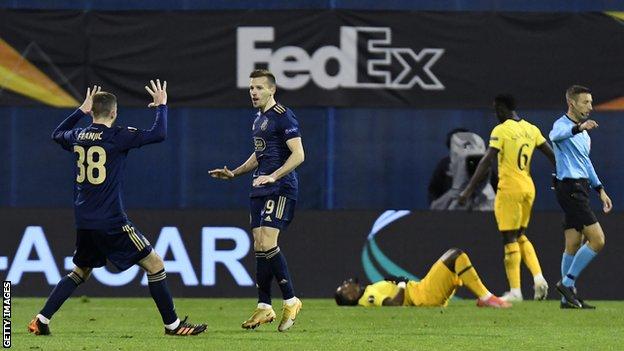 Tottenham were knocked out of the Europa League as a sublime hat-trick from Mislav Orsic completed a remarkable second-leg turnaround for Dinamo Zagreb.

Leading 2-0 after a one-sided first encounter in London seven days earlier, Spurs – who made seven changes – paid the price for a desperately poor performance against the Croatian champions.

Orsic deservedly curled the hosts ahead on the night with a wonderful strike from the edge of the box and swept home Iyayi Atiemwen's cross to bring the tie level in Zagreb.

He added a superb third at the start of the second period of extra time, driving at a terrified Tottenham defence before firing another fine finish into Hugo Lloris' bottom corner.

Tottenham twice almost snatched salvation and progress at the end of both normal and extra time but Harry Kane was thwarted on each occasion by superb saves from Dinamo keeper Dominik Livakovic.

Spurs piled on the pressure in the closing stages but Dinamo held out to earn a fully merited place in Friday's quarter-final and semi-final draws.

Their emotional celebrations at the final whistle, as players raced around wildly and were embraced by scarcely believing coaching staff, were a stark contrast to the Spurs stars sat on the pitch in despair.

"I think everyone is a hero tonight because we all breathed as one in an unforgettable match," said Orsic.

"We were gutted after the 2-0 defeat in London because we felt we had it in us to do better and we couldn't put a foot wrong tonight. It was a dream come true."

Son-shorn Spurs struggle in both boxes

Tottenham have frequently been accused of relying too much on Kane in recent years, particularly when they have struggled during his spells out injured. They now have to deal with the absence of the equally influential Son Heung-min, who has a hamstring injury.

Their collapse in Croatia mirrored Sunday's derby defeat by Arsenal when Spurs only really got going after the damage was already done. It would have been harsh on dynamic Dinamo had the visitors' late flurry denied them an historic triumph.

Had they produced the type of creativity that was seen in the closing stages in normal time, this embarrassment could have been avoided. It was telling that of the seven changes made by manager Jose Mourinho, five were substituted.

"If I forget the last minutes of extra time, where we did something to get a different result and go through, in the 90 minutes and first half of extra time there was one team that decided to leave everything on the pitch," Mourinho told BT Sport.

"They left sweat, energy, blood. In the end they left even tears of happiness. Very humble and committed. I have to praise them.

"On the other side, my team. They didn't look like they were playing an important match. If for any one of them it is not important, for me it is."

Replacements Gareth Bale and Giovani Lo Celso, the latter making his return after more than three months out injured, injected some life into Spurs' attacking play, and both saw low strikes well saved by the impressive Livakovic. 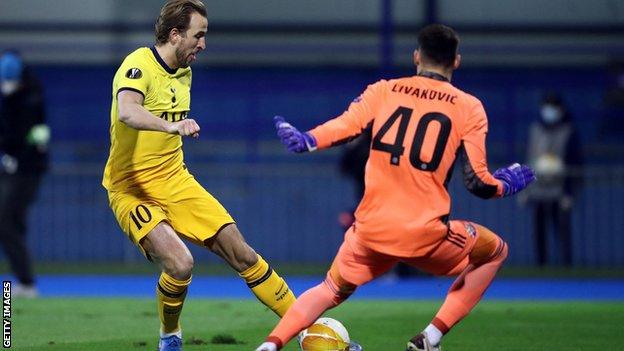 It was Kane, as usual, who carried the bulk of Tottenham's threat and he had great chances at the end of the first half, second half and extra time but Livakovic stayed big for the first, then pulled off a point-blank save from a header and scurried across his goal to thwart the England striker right at the death.

All of the blame should not fall at the feet of Spurs' forward players. Their back line was run ragged by the unheralded Orsic, whose first goal was sublime but was allowed a lot of space for the other two.

Mourinho had said the Europa League carried Spurs' best chance of Champions League qualification and he now faces a huge task to lift his deflated troops, sans Son, for a bid to reach the Premier League top four, of which they sit six points adrift.

Deserving Zagreb overcome hurdles on and off pitch

If the result leaves Tottenham in turmoil, you could forgive Dinamo for having little sympathy, given they lost their head coach Zoran Mamic to a prison sentence for fraud in between the first and second legs.

The Croatian league leaders responded with a display, and result, that will go down in the annals of their history.

Mourinho had warned his players that the tie was far from over heading into the second leg and with good reason as Dinamo had only been beaten once in their previous 16 European home matches.

The hosts, under the guidance of Mamic's assistant Damir Krznar, were encouraged by Tottenham's apparent willingness to sit on their first-leg lead, Lovro Majer lashing inches wide from 15 yards in a warning of what was to come.

Even so, it required a moment of magic from Orsic to set the comeback in motion as he cut inside from the left and unleashed a wonderful right-footed curler that left Lloris clutching at thin air.

Orsic timed his run into the box perfectly to meet Atiemwen's cross for his second before sparing Marin Leovac's blushes for a poor miss in the first half of extra time with a sensational third.

"It panned out ideally because scoring in the opening 15-20 minutes might have amounted to taunting the lion," said Krznar.

"This was my first game in charge but tonight's result is a product of the staff's work in the last two or three years and the constant progress we've made."

Dinamo have won their national title in 14 of the past 15 seasons but this win ended a wait of 51 years for a European quarter-final appearance, their last having come in the now-defunct Cup Winners' Cup in 1970.

Comeback kings do it again – the stats

Dinamo Zagreb have progressed from each of their past three knockout ties in major European competition in which they lost the first leg (also v Ajax in 2007-08 and Viktoria Plzen in 2018-19). This was the third time Jose Mourinho has lost a match in European competition by a three-goal margin, with two of those coming with Spurs (also v RB Leipzig in March 2020) and another with Real Madrid (v Borussia Dortmund in April 2013). Dinamo Zagreb registered their third victory at home to an English side in European competition, after wins against Arsenal in 2015 (Champions League) and Leeds in 1967 (Inter-Cities Fairs Cup). Dinamo Zagreb's Mislav Orsic has been directly involved in seven goals in his past five Europa League games (five goals, two assists). Orsic became the first Dinamo Zagreb player to score two hat-tricks in major European competition, also netting one in last season's Champions League v Atalanta. Line-upsMatch StatsLive Text