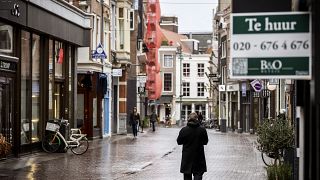 As voters head to the polls in the Netherlands this week, one issue has sparked intense debate within the country.

Where do the Dutch see themselves in the European Union now that the United Kingdom has left?

With the British gone, following Brexit at the beginning of the year, the Netherlands has lost an important partner culturally, as well as on trade, business and foreign policy.

“The UK departure has really meant that the Dutch have lost an ally in the way that they think and operate,” Maria Demertzis, from Brussels-based think-tank Bruegel, told Euronews. “The Dutch always look West for the way they do business and for the way they engage.”

As an EU founding member state, the Netherlands is traditionally very pro-European, so its voice within the bloc has significant influence.

But there is now concern that with Brexit, the sway of the Dutch could be diminished.

“With the UK gone, a very important voice has gone in all matters European,” Demertzis added.

“There is now only a Franco-German agreement that is required in the EU for things to progress and the Dutch are worried that that will be all it takes, and others will not be heard, so they want to make sure that others are also listened to.”

Accord ing to Eurostat, the country was the EU’s fifth-largest economy in 2019, making up 5.8 per cent of the bloc’s GDP and it’s also one of the largest contributors to the EU budget.

Similar to the British public’s decision to vote to leave the EU, financial contributions and the lack of funds received in return has helped give rise to discontent in the Netherlands towards Brussels.

This culminated in a very public spat last year between the Dutch and its EU partners over budget and the COVID-19 recovery fund.

The Hague, alongside its so-called “Frugal Four” partners – Austria, Sweden and Denmark – claim they just want public money to be spent wisely.

But many other EU countries accuse the Dutch of being too frugal, insensitive and even uncompromising.

This has led to speculation over the possibility of a Nexit – or Netherlands exit.

Dharmendra Kanani, Director at Friends of Europe, claims these fears are overblown, however.

“I think that’s just people in the [Brussels] bubble making hay of something which is actually not real anymore,” Kanani told Euronews.

“I don’t think it’s a live concern for communities across Europe. I do think that the greater issue here is how the populists and nationalists will potentially claim greater ground in domestic politics if governments don’t play their hand well effectively around the management of the finances and the public debt which is historic.”

The rise of nationalism witnessed in the Netherlands seems to confirm the growing discontent towards Brussels and its institutions, with Geert Wilders far-right Freedom Party (PVV) currently polling in second place for this week’s election.

And with his Eurosceptic party predicted to win up to 20 seats, the debate over the Netherlands’ place within the EU is unlikely to end soon.