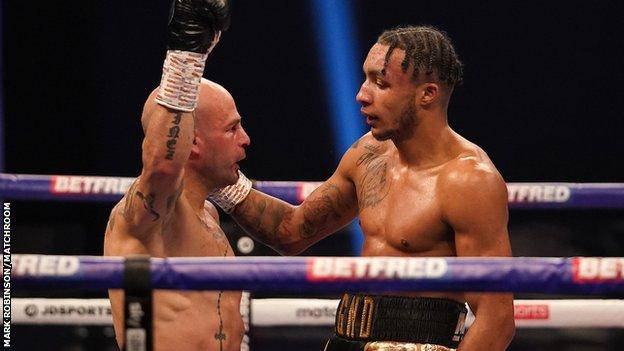 Promoter Eddie Hearn says the judges' scoring was a "disgrace" in Kiko Martinez's unanimous points loss to Zelfa Barrett and called for a rematch.

"That was a very close fight. I thought 118-111 is absolutely disgusting for Martinez," Hearn told Sky Sports.

"Martinez was relentless and if he lost it was by one or two rounds."

He added: "We have some fantastic officials but 118-111 doesn't do anyone any favours. After all that effort Martinez may as well have boxed on the back foot and had an easy night.

"How are we going to bring foreign fighters to this country when they get zero credit for their performance?"

There was a scathing response on social media too from former British fighters Tony Bellew and Paul Smith Jr, as well as boxing manager Lou DiBella.

Hearn, who promotes Barrett, continued: "I want to see Kiko get another chance because he deserves it. And credit to Barrett it was a tough fight. We should be debating a close fight, but instead we are talking about the scorecards again – it is a disgrace for Martinez."

Martinez said: "I don't think the judges have been fair with me. As Eddie says, the best outcome would be a rematch. It was a great fight, possibly tarnished by the results."

Barrett, who extended his record to 25 wins and one defeat, said: "I learned a lot from the fight. I will not shy away [from a rematch]."

A beautifully timed left hook floored Mould in the ninth and he suffered the first defeat of his career moments later when Wood piled on the pressure and sent him down again after a flurry.