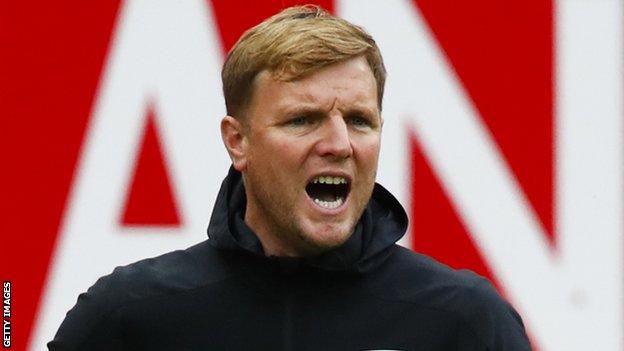 Eddie Howe is the clear favourite to become the next manager of Celtic, with talks between the two parties at an advanced stage.

The former Bournemouth boss, 43, has held discussions with members of the club's board, including major shareholder Dermot Desmond.

Howe left Bournemouth in August 2020 when the club's five-year stay in the Premier League came to an end.

He has been linked with Sheffield United and Newcastle in recent weeks.

'Rightly hailed, but Howe is not flawless hero'

Howe was in charge at the Vitality Stadium for more than 450 games across two spells spanning more than a decade, guiding them to three promotions in six seasons and taking them from League Two to as high as ninth in the Premier League.

He also had a stint with Burnley in the Championship from January 2011 to October 2012.

Neil Lennon resigned as Celtic manager in late February, with assistant coach John Kennedy taking over on an interim basis.

Celtic had also won the Scottish Cup and League Cup in each of the past four seasons but lost their grip on the latter when eliminated at home to Ross County in November.

The club's long-standing chief executive Peter Lawwell is stepping down at the end of June, with Dominic McKay moving from Scottish Rugby as his replacement.

On Wednesday, it was announced that Nick Hammond, head of football operations, had resigned to "pursue new opportunities". And veteran captain Scott Brown has turned down the offer of a one-year contract extension to take up a player-coach role with Aberdeen next season.

Celtic's search for a successor to Neil Lennon officially started when the Northern Irishman left in February – in reality it started well before and Eddie Howe's name was always one the board kept coming back to.

Roy Keane became a favourite at one point but my understanding is, that was never likely to happen. Celtic wanted a name, yes, but they wanted one with a track record in management and in Howe they have both.

At Bournemouth he became known for bringing in young players, making them better and selling on at a profit – that has been Celtic's strategy since Martin O'Neill left.

In Howe they also have a man who has very obvious similarities to former manager Brendan Rodgers. A player whose career was cut short through injury and so opted for coaching from an early age. A man who has proved himself in the English Premier League and a man known for his attention to detail.

If he signs up, he has a huge task ahead. Celtic is a club in transition but the expectation from fans remains as high as ever. After a year to forget, the club's board believe they now have the man who can take them back to the top and keep them there.