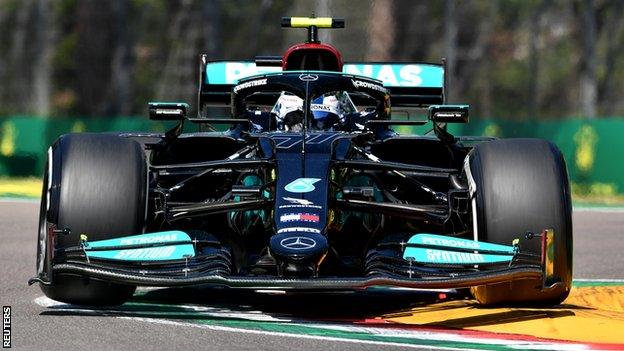 The two former team-mates came together at the Villeneuve chicane, causing the session to be stopped for a time.

Red Bull team boss Christian Horner said Perez had been on a flying lap and Ocon on a slow lap when they collided.

Mercedes driver Valtteri Bottas was fastest at the end of an incident-packed session.

Haas' Nikita Mazepin crashed at the Rivazza corner as the chequered flag signalled the end of first practice.

The accident continued a torrid start to the Russian's F1 career. Mazepin had a spin on his very first lap at the same corner at the start of the session, and spun four times at the opening race of the season in Bahrain three weeks ago before crashing out of the race on the first lap.

Formula 1 was having technical issues with its broadcasting system, which affected both TV and timing screens. Teams also did not have any radio between pits and car. So it remains unclear exactly what happened in the incident between Perez and Ocon.

Horner said: "I've only had it from the driver's perspective but obviously it sounds like Ocon was on a slow lap, and Sergio was on a flying lap and there's been contact between the two guys into that corner."

Perez was left with a damaged left rear corner and Ocon's a broken front right.

The drivers were called to the stewards to explain the incident but no further action was taken.

The stewards report said: "Ocon slowed before Turn Five in order to let Perez by, as well as moving entirely to the inside of the turn. Perez was on a fast lap.

"The two cars reached the apex at the same time, and just barely touched wheels.

Bottas ended the session 0.041 seconds ahead of team-mate Lewis Hamilton, with Red Bull's Max Verstappen 0.017secs further back in third.

Ferrari's Charles Leclerc was fourth fastest despite missing the first half of the session with technical issues, ahead of Alpha Tauri's Pierre Gasly, the second Ferrari of Carlos Sainz and Alpine's Fernando Alonso.

Ferrari team boss Mattia Binotto said Leclerc had some "issues on power-unit actuation that we had to address – nothing major". He added that it was "very difficult to assess the performance," despite an apparently strong showing by the team in the session.

Gasly's team-mate Yuki Tsunoda, who was slowest of all, suffered what team boss Franz Tost said was "an electronic problem on the power unit, a wiring loom or something like this".

Hamilton and Verstappen were among the other competitors to have brief off-track moments as the drivers came to terms with one of the sport's most demanding tracks on a cool morning in Emilia Romagna, with temperatures at 11C.