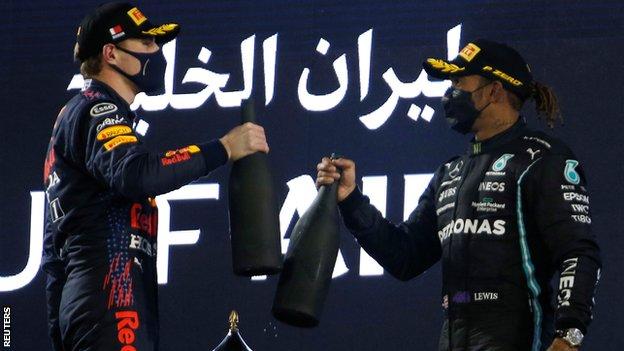 Lewis Hamilton says his battle with Max Verstappen for this year's drivers' title does not yet live up to his rivalry with Sebastian Vettel.

Hamilton said he was "excited" by the challenge posed by Red Bull but that 2017 and 2018 against Vettel at Ferrari were the favourite years of his career.

"Racing with Max, he doesn't have the background Seb has," Hamilton said.

"Max has the chance of being a future champion. Whether that's now or later depends on the job the team and I do."

Hamilton, who was sitting alongside Vettel in a new format of news conference before the second race of the season at Imola, explained why he held his fights with the German, who has won four titles, in such high regard.

"Knowing how hard it is to be where we are today," he said. "Knowing I was racing against an incredible driver, and not only that but a great man. And as we were racing against another team who were very strong at the time.

"It took a lot out of both of us to remain focused and deliver weekend in, weekend out. It was a difficult period but it brought us closer because the respect we have between us is huge. It is different now."

The seven-time champion overturned the odds to beat Verstappen at the first race of the season in Bahrain last month, even though the Red Bull was a faster car.

Hamilton said: "It is clear Red Bull have started off really well and with a great package and Max was driving really well, so it is set up for a good season ahead."

Verstappen said he saw finishing second in Bahrain as a "missed opportunity".

Battle between the two men is rejoined in Imola this weekend at the Emilia Romagna Grand Prix.

Mercedes have spent the intervening three weeks since Bahrain analysing how to improve the performance of their car, but fear that the Red Bull's apparent advantage in high-speed corners will make them even harder to beat on the historic track.

Hamilton said: "We just need to keep our heads down and do what we do. We love the challenge and it is exciting for all of us that we have such a challenge on our hands and it is not one we shy away from.

"We are only going into the second race. I can't assume and I can't guess what's up ahead of us – I don't know.

"I hope it's exciting for the fans and that it's all it's cracked up to be, particularly in a time when we need the best entertainment for the fans."

Verstappen said: "They are very close [to us] even if they don't say it. [Bahrain] is definitely an opportunity missed but if we have the fastest car it won't matter, because we have 22 races to finish in front of them.

"This is not Bahrain. I was battling with a few issues as well. So it was not the sweetest race. But they can also do better and we just have to keep improving.

"Of course when I crossed the line I was disappointed, but I have learned that there is nothing lost after the first race. We had a very competitive package and we scored good points."

The race weekend schedule has been shifted on Friday and Saturday to avoid a clash with the funeral of the Duke of Edinburgh on Saturday afternoon, with qualifying moved an hour earlier to 13:00 BST.

Hamilton said: "The Duke of Edinburgh was such a racing fan and it's so sad to hear of his passing, he had a really great, long, life and I know he was really committed to having an impact and helping young people. It is really inspiring, the legacy he has left behind.

"My thoughts and prayers are with Her Majesty and the family and I am sure he will be watching from above."