“Hopefully if my selection demonstrates anything, it’s that everyone in the regions now has a chance,” says Arlott, after surprise call-up for England Women’s Test against India Women – a match live on Sky Sports Cricket from 10.30am from Wednesday 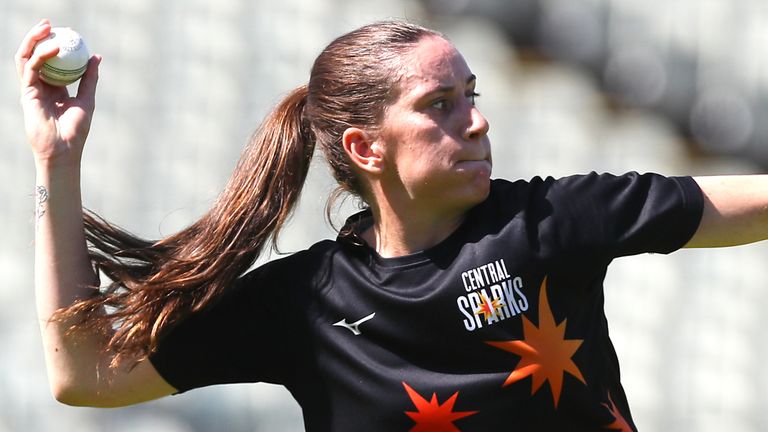 Emily Arlott is “pretty sure” she is a distant relative to legendary commentator John Arlott (Pic credit: Laura Malkin)

Emily Arlott admitted she was “probably as shocked as anyone” about being drafted into the England squad for the first time ahead of next week’s one-off women’s Test against India at Bristol.

Uncapped Arlott was included in a 17-strong group, which is expected to be whittled down so non-selected players can go back to competing in the Rachael Heyhoe Flint Trophy, where the 23-year-old seamer excelled last weekend.

She finished with figures of 5-29, including four wickets in an over and three in three balls, to help Central Sparks thrash defending champions Southern Vipers by 120 runs on Saturday.

Within a few months of being among those handed a full-time domestic contract, Arlott has been catapulted into the England set-up for what will be just the ninth women’s Test in the space of the last decade, starting on June 16.

She said: “I’m probably as shocked as anyone that I got the call, I didn’t even think my name was in contention to be considered. To get the call rounded off that weekend, really.

“I think it’s probably the best thing that could have happened. If it had been something that I expected, I think something like Saturday might not have happened, where I was trying to force something.

“Whereas I’ve spent the whole of this year just doing everything with a purpose but relaxing with it as well and I’ve found that the performances have come with being able to enjoy the moment rather than thinking too far ahead.

“I think it will do me really well long-term not knowing much about it just because I found out on Sunday and I’ve got to Loughborough on the Tuesday. It just means I can get going straight away and get to know the girls.”

Arlott, who has taken eight wickets in three Rachael Heyhoe Flint Trophy matches at an average of just 15.12, believes her inclusion in the England squad is categorical proof that the domestic deals are having an impact.

She said: “Hopefully if my selection demonstrates anything, it’s that everyone in the regions now has a chance. I may be one of the first to come through the Rachael Heyhoe Flint Trophy but I hope I’m not the last by any means.

“I hope that people keep putting in performances – it shows that the system really works, and that’s a credit to the ECB and the regions for creating such an environment that this is a possibility.

“I think two years ago, I don’t think I’d have got to where I have done without it, really.”

The youngster believes she may be a distant relative of beloved former Test Match Special commentator John Arlott, a celebrated cricket journalist from Basingstoke who died in 1991, aged 77.

She added: “It’s never actually been confirmed but I am pretty sure – considering a lot of my family are from Hampshire – that there is a connection. We’ve just never actually looked into it.

“I don’t know whether it maybe swayed us more towards cricket, but my brother and I definitely played a lot of cricket when we were younger.

“We’ve actually got a couple of books, I think he released a book so we’ve got those at home. We’re quite well aware of him and we’re pretty sure that there is some connection there.”

Watch the Test between England Women and India Women live on Sky Sports Cricket from 10.30am on Wednesday, June 16.