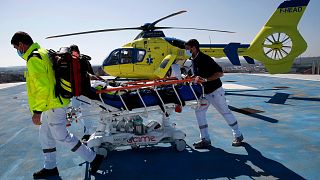 French President Emmanuel Macron has taken great pride in choosing a so-called “third way” to tackle the resurgence of the COVID-19 pandemic but his strategy is increasingly condemned at home.

Macron announced on Wednesday evening that a partial lockdown currently in force in 19 of the country’s 96 metropolitan départements would be extended nationwide come Saturday.

It comes as the number of new daily cases reached over 59,000 on Wednesday and as the number of COVID-19 patients in intensive care units crossed 5,000 earlier this week for the first time in 11 months. The nationwide infection rate has now doubled over the past three weeks.

Since January and February, French scientists have been warning of trouble ahead and doctors had urged the government to impose stricter measures than the nationwide curfew introduced in mid-December.

But in his televised address, Macron offered no mea culpa, doubling down on his assertion that his refusal to reimpose a harsh lockdown — like the one first rolled out in the spring of 2020 — was the right call.

“We have by these collective choices we made, gained precious days of freedom, weeks of learning for children, we have allowed hundreds of thousands of workers to keep their heads above water without ever losing control of the pandemic,” he said.

“So I believe we did the right thing. Believing in the responsibility of the French is never a gamble,” he added.

But the government is increasingly alone in thinking its “third way” is the right way.

Lawmakers from the opposition largely boycotted a vote on the new measures at the National Assembly on Thursday morning.

“This vote is useless, it’s just staging,” the leader of the Socialist party Olivier Faure told French television. The ballot in Parliament was consultative, meaning the measures would have been rolled out even if it had been defeated.

“The reality is that he (Macron) disorganises everything because he’s not letting anyone anticipate,” he went on.

Damien Abad, leader of the right-wing Les Republicains group in parliament, said they would not “support this parody of democracy”.

“We will not take part in this vote to send you, alongside the entire opposition, to your own isolation and leaving you alone to take responsibility for this sanitary Berezina,” he added, referring to a retreat by Napoleon’s army which resulted in heavy losses.

Marine Le Pen, leader of the far-right Rassemblement National, and one of Macron’s challengers in next year’s presidential election said his address “has opened more questions than it has answered.”

Public opinion is also not very favourable. A survey by pollster IFOP released on Wednesday found that 61 per cent of French people do not approve of Macron’s action, an increase of three percentage points on the month.

‘We are working for nothing’

On the frontline of the pandemic, workers are tired.

“We feel this wave coming very strongly,” said Romain Beal, a blood oxygen specialist at the Amiens-Picardie Hospital. “We had families where we had the mother and her son die at the same time in two different ICU rooms here. It’s unbearable.”

A colleague, Stephanie Sannier, shakes off the stress and sorrow of a 12-hour shift by blasting music and singing as loud as she can in her car on the way home.

“We have the impression that the population is doing the opposite of what they should be doing,” nurse Sannier said, before heading off on her rounds. “And we have the feeling we are working for nothing.”

Reactions from teachers have been mixed. Schools are to close for three weeks to four weeks— which include the two-week Spring holiday — depending on the years with up to two weeks of remote learning.

Nave Bekhti, Secretary-General of the General Union of the National education (Sgen-CFDT) cautiously welcomed the announcement as “important” and “necessary given of the epidemic pressure”.

Some schools had denounced that staff testing positive were not replaced, including cleaning personnel.

Bekhti stressed on Twitter that the government must now start now outline conditions for going back to school on April 26.

“It is essential to better protect staff (all those in contact with students, especially when they are not wearing masks)” with masks and vaccinations, she said.

Another union of teachers from kindergarten to primary schools, FSU, was much more stringent in its criticism, writing in a statement that is “worried about the dramatic consequences of this incoherent management and lockdown”.

“No lessons have been learned in the last year, the minister was unable to anticipate and today, on the eve of school closures, staff find themselves in a situation of unpreparedness similar to that of last year,” it added.