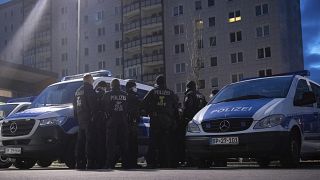 Federal German police forces stand in a parking lot in Berlin-Lichtenberg and prepare for a raid.

The investigation focused on EncroChat, a communications service used particularly by criminals in the illegal drug trade.

More than 750 arrests were made on Tuesday, Frankfurt prosecutors and the country’s Federal Criminal Police Office (BKA) said in a statement.

Authorities also seized a large number of drugs as part of the raids. This included 3.2 metric tons of cannabis, about 320 kilograms of synthetic drugs, more than 125,500 ecstasy pills, almost 400 kilograms of cocaine, and 10 kilograms of heroin.

Investigators also confiscated 310 weapons, more than 12,200 rounds of ammunition, and assets worth €168 million.

Frankfurt prosecutor Julia Bussweiler told reporters that the investigation was far from over and they were still sifting through and evaluating the seized data.

“There are many people who are in pretrial detention,” she said. “The data is being checked to see whether it is sufficient for an indictment.”

The investigation into EncroChat began in March 2020 and was assisted by authorities from France and the Netherlands.

“The EncroChat data was obtained in the context of a French investigation,” Bussweiler told the Associated Press.

“Together with the Dutch authorities, set up a so-called joint investigation team and within this investigation team they managed to decrypt the encrypted data and therefore read the communication between the users of the Enchrochat mobile phones.”

EncroChat, which had 60,000 users worldwide last year, has now been shut down. In June 2020, it had advised its users to throw away their devices after realising that their system had been compromised.

“The information provided, especially for drug trafficking offences and drug smuggling, has completed the picture of the situation in Germany,” said Christian Hoppe, head of the special department at the BKA.

“From the drug suppliers to the logisticians of importation and distribution in Germany to their customers, we were able to identify all those involved in the crime in one fell swoop.”

“The fact that one in four suspects was armed underlines the high-risk potential of organised drug crime groups for our society”.