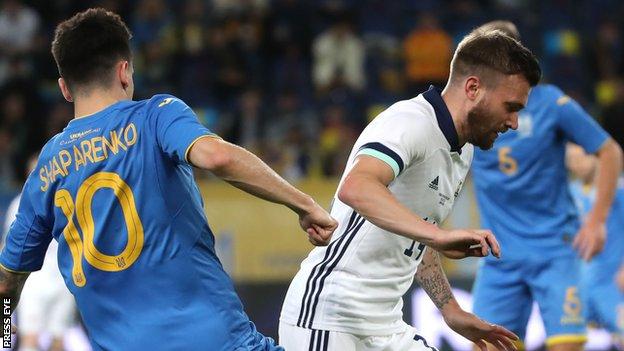 Midfielder Ali McCann believes Northern Ireland were unlucky to lose 1-0 to Ukraine in Dnipro after conceding what he described as a poor goal.

Unmarked Oleksandr Zubkov scored in the 10th minute for the hosts in their penultimate Euro 2020 warm-up match.

NI were overwhelmed in a relentless first half hour but responded well and came close to levelling through Ciaron Brown before the break.

"It was a tough game," said McCann, who impressed in midfield again.

"I thought it was a poor goal to concede from us and it doesn't start us off too well, but I thought we grew back into it and put in a good performance in the second half.

"We can probably count ourselves unlucky not to come away with something but it was a good team performance, particularly in the second half, and we can take loads of positives into going into the next camp.

"(The week) has been brilliant – the more caps you get, just being in and around the camps, it's a great experience and I'm loving it."

The defeat, played in front of 15,000 home supporters, meant Northern Ireland were unable to build on Sunday's 3-0 victory over Malta, which was manager Ian Baraclough's first win in 90 minutes.

The manager warned before the game that Ukraine would provide a much sterner test and that was evident from the start in what was Northern Ireland's last outing before resuming their World Cup qualification campaign in September.

As he did on Sunday, Baraclough went for an experienced line-up rather than starting any of the youngsters called into the squad, though Dan Ballard came into the starting line-up after helping Blackpool win the League One play-off final at the weekend.

Peacock-Farrell made saves at important times for Northern Ireland

In the absence of Jonny Evans, the Northern Ireland back three was marshalled by the experienced Craig Cathcart, with youngsters Ballard and Ciaron Brown on either side of him, and they came under incessant pressure in the opening stages.

Players running in behind them was their biggest challenge, with Zubkov on the left and Andriy Yarmolenko on the right causing a lot of problems from wide areas, with the West Ham man firing just wide in the first minute.

Northern Ireland looked like they were beginning to grow into the game when the hosts took the lead in the 10th minute, and it was goalscorer Zubkov who created the initial danger when he got in down the left.

He fed Roman Yaremchuk whose shot was superbly saved by Peacock-Farrell and it was from the second phase of the resulting corner that the goal came, with Zubkov totally unmarked in between Stuart Dallas and Paddy McNair to score with a free header.

Zubkov got in behind down the left again and squared for Yaremchuk who looked certain to score before Peacock-Farrell produced a wonder save to get down low and deny him, although Zubkov was later deemed to be offside.

Baraclough's men were having to work extremely hard to stop Ukraine doubling their lead before the interval, with Shane Ferguson – operating as a left wing-back in NI's 3-5-2 formation – blocking a Yarmolenko drive with an excellent last-ditch block not long after the same player fired just wide with a lovely curler.

Having kept their shape well, Northern Ireland almost grabbed an unlikely equaliser on 36 minutes when McNair delivered a perfectly weighted free-kick from the right that Brown rose to meet with a strong header only to be denied by a good save from Heorhiy Bushchan.

With a major tournament looming, it was perhaps no great surprise that Ukraine's tempo and intensity dropped in the second half, and Northern Ireland certainly took advantage as they enjoyed a lot more possession.

As he has done a few times recently, Baraclough went with a speedy winger – this time McGinn – up front alongside Josh Magennis despite having striking talent such as Liam Boyce and Kyle Lafferty on the bench.

McGinn struggled to make an impact and was replaced by Jordan Thompson at half-time, with the Stoke City man looking in confident mood and getting on the ball often, even if he did not get as close to Magennis as the target man might have liked.

Ali McCann worked hard in what is normally captain Steven Davis' role at the base of a midfield three and the St Johnstone man managed to get forward well midway through the second half before his header from a Dallas cross went the wrong side of the post.

Lafferty and Paul Smyth both came off the bench and Lafferty played a clever ball inside to the former Linfield forward, but he dragged his shot just wide just before Peacock-Farrell made another excellent save from Yarmolenko.

Substitute Besyedin thought he had made it 2-0 in the final minute of the match but his tap-in was ruled out for offside, minutes after Chelsea's 19-year-old centre-half Sam McClelland had come on for his senior Northern Ireland debut.