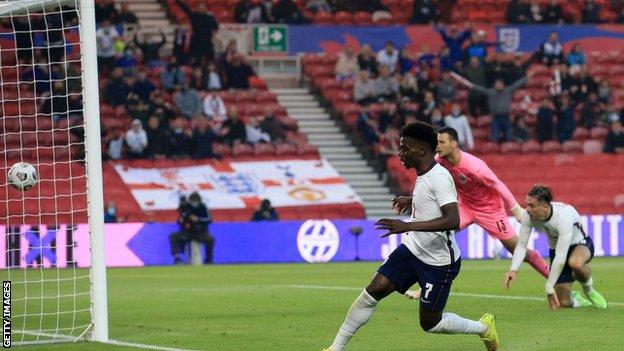 Bukayo Saka goal came in his sixth appearance for England

England's countdown to the Euros continued with a narrow win over Austria at Riverside Stadium – but they suffered an injury setback as Liverpool defender Trent Alexander-Arnold limped off late on.

Manager Gareth Southgate saw his experimental side secure victory when Arsenal teenager Bukayo Saka crowned a fine move with an angled finish for his first international goal after 56 minutes.

Southgate, who named his 26-man squad for the Euros on Tuesday, picked a side with an unfamiliar look as players involved with Manchester United, Chelsea and Manchester City in the Europa League and Champions League finals were not selected, so he will be happy to come out with a win – but it was not a convincing display.

And as Alexander-Arnold walked gingerly around the pitch with the England medical staff, debutant Ben White cleared off the line from Alessandro Schopf after Pickford's punch fell to him in the area.

The victory means England have won their past seven friendly matches, their best run in friendlies since winning seven in a row under Sir Bobby Robson between June 1985 and May 1986.

Reaction to England's win against Austria 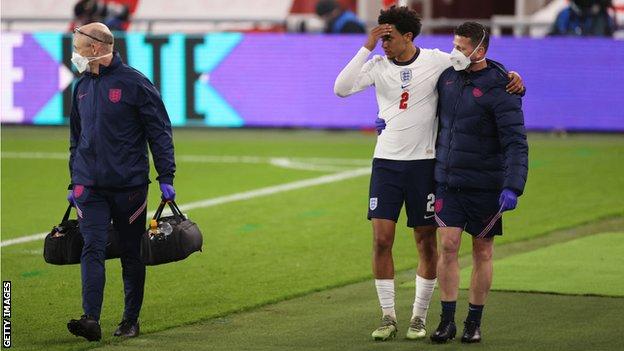 Trent Alexander-Arnold limped off in the 90th minute

Alexander-Arnold's selection for the Euros was the big debating point in the build-up to the squad announcement, with Southgate ultimately deciding he was simply too big a talent to leave out.

And that talent was on display at the Riverside in both a defensive and attacking context, before the worrying sight of the 22-year-old moving gingerly around the perimeter of the pitch in the dying seconds, accompanied by England medical staff with his shirt pulled over his head in disappointment.

It marred a night when England got the win against Austria, albeit with a less than impressive performance which was perhaps to be expected with a much-changed side forced on Southgate by those many absentees, which saw him select Jesse Lingard even though he is not in the Euros squad.

Alexander-Arnold's fitness, however, will be the big takeaway as he clutched his thigh following a routine clearance, collapsing to the ground before being consoled by Conor Coady, insult being added to injury when he was shown a yellow card by referee Lawrence Visser for returning to the pitch without permission, even if it was only for a few seconds.

Liverpool's Alexander-Arnold was one of four right-backs included in Southgate's squad so it is hardly a crisis in that position but he will not want to be without a player who can provide such quality.

It was fitting that Saka scored his first international goal, illustrating his value to England, while Jack Grealish produced a man-of-the-match performance that fully deserved the ovation he received when he came off.

Grealish was England's main creator and driving force – but it was not such an impressive night for his Aston Villa team-mate Tyrone Mings, who was fortunate to escape a moment of recklessness in the first half when he appeared to drive his arm straight into Austria striker Sasa Kalajdzic in the area, flattening him in an incident that was missed by the referee.

England lived on their nerves late on and were grateful to some wasteful Austrian finishing and desperate defending to close out the win as Southgate moves on to Sunday's final pre-Euros friendly against Romania back here on Teesside with a much stronger side at his disposal.

Bellingham youngest since Rooney – the stats

Austria have lost consecutive matches for the first time since losing to Poland and Israel in March 2019.Aged 19, Bukayo Saka became the third teenager to score for England while playing for Arsenal, along with Theo Walcott and Alex Oxlade-Chamberlain.Jude Bellingham became the youngest player to start a game for England (17 years and 338 days) since Wayne Rooney in September 2003 vs Liechtenstein (17 years and 321 days).England have not lost any of their last 19 matches when an Arsenal player has scored (W17 D2) since Francis Jeffers scored in a 3-1 home defeat by Australia in February 2003.Saka was the 33rd different player to score a goal for England under Gareth Southgate, one more than scored for the Three Lions under Sir Bobby Robson and the most since 39 scored under Sir Alf Ramsey.Ben White became the fifth Brighton player to play for England after Tommy Cook, Peter Ward, Steve Foster and Lewis Dunk. England have won all seven matches when Brighton players have featured, the best 100%-win record when players from a club represent the England national team.

The Three Lions round off their Euro 2020 preparations on Sunday with a friendly against Romania (17:00 BST) before their tournament opener against Croatia on Sunday, 13 June (14:00 BST).