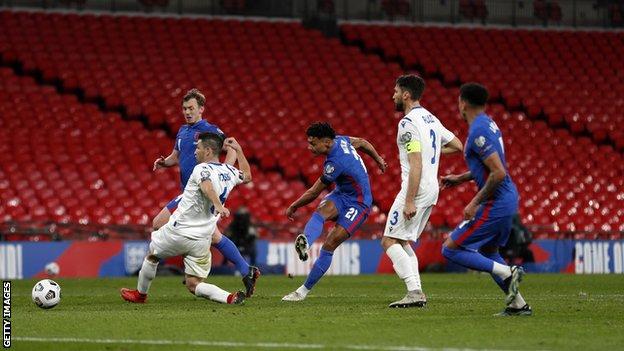 Ollie Watkins scored with his first shot for England

The side rooted to the bottom of the Fifa world rankings at 210 were never going to be anything other than an easy target for England, even with captain Harry Kane starting on the bench, and so it proved in this one-sided qualifier behind closed doors.

England were encamped in San Marino territory for the entire game and the only disappointment for manager Gareth Southgate will be the fact their finishing was very poor.

They should have inflicted a much heavier loss on their besieged opponents, the highlight being a late goal for Aston Villa striker Ollie Watkins on debut after he came on as a substitute.

James Ward-Prowse's first goal for England, swept in from Ben Chilwell's low cross, gave them the lead after 14 minutes before Everton's Dominic Calvert-Lewin doubled the advantage seven minutes later with a header from a fine Reece James delivery.

Raheem Sterling, who looked desperate to score from the start, added the third before half-time when his shot was deflected in at the near post and Calvert-Lewin scored his second with a simple finish, laid on by Jesse Lingard, eight minutes after the break.

Southgate's side lost rhythm after four interval substitutions but Watkins got in on the act with a crisp low finish to mark his first cap with a goal seven minutes from time after he came on for two-goal Calvert-Lewin.

One San Marino player to emerge with huge credit was goalkeeper Elia Benedettini, who made a string of superb saves from Chilwell, Mason Mount, Lingard and Ward-Prowse as England made the expected winning start to their World Cup qualifying campaign.

Is Euros selection getting tougher for Southgate?Football Daily podcast: England debut delight for WatkinsReaction to England's win over San Marino

England go through the motions

England were presented with, statistically, the easiest game in international football and while the points were secured in the expected fashion, the victory margin could and should have been far more emphatic.

They carved out openings at will, with 32 shots – 15 on target – but the likes of Sterling and Calvert-Lewin could have added to their goals, while Lingard will wonder how he did not find the target.

Ward-Prowse will be delighted with his goal while James, who is a serious contender to start at right-back at the Euros, was a constant threat and source of supply in his 45-minute appearance.

Calvert-Lewin's two goals, albeit among a couple of bad misses, will do his confidence good and step up his claims to be Kane's understudy, as he continued his smooth transition to England level.

Lingard, who has been so impressive since joining West Ham United on loan from Manchester United, showed Southgate what he could do on his first England appearance since June 2019.

However, he will have been bitterly frustrated not to hit the target while John Stones, another recalled, had no defensive work to do but should have scored with a first-half chance which he turned over the bar from six yards.

Wolverhampton Wanderers captain Conor Coady was also unemployed defensively but there may just have been an indicator into Southgate's opinion of his leadership qualities when he gave him the captain's armband for the second half.

This was little more than a confidence-building training exercise with England enjoying 85% possession, almost entirely in the San Marino half.

Burnley's Nick Pope got the nod in goal but he barely touched the ball in the entire game. This was a cap and clean sheet for this talented keeper but nothing else.

It is arrogant to simply dismiss San Marino and say they should not be playing qualifiers at this level but it is hard to see what England and manager Southgate learned from this one-sided, rather soulless experience against a team who were little more than cannon fodder.

This was three points and move on to Albania in Tirana on Sunday.

It was a 'fairy tale' – what they said

Advertisement
We did it as well as we could. I was really pleased with the way we pressed when we lost the ball – that highlighted the mentality of the team for the full 90 minutes.

"Of course, it's an opponent we should beat, but I thought they went about the job really well.

"There were lots of good individual performances, it would be difficult to pick one out.

"Mason Mount in the first half was excellent and set the tone. It was good to see Jesse Lingard looking like he's enjoying his football again – there were a lot of good things."

On Ollie Watkins: "The first thing you saw was the reaction from the rest of the team, that shows you how together they are – they know what it means for him. He's settled in really quickly with the group.

"He's a really humble boy and it was nice to be able to give him half an hour or so. For him to get a goal is a fairy tale isn't it?"

England have won all seven of their matches against San Marino, by an aggregate score of 42-1.San Marino have lost 140 of their 143 qualifying matches for the World Cup and European Championships (D3).England have won their past 19 home matches in qualifying for the World Cup/European Championships, scoring 67 goals and conceding six.San Marino have only conceded more goals against Belgium (46) than they have in their seven games against England (42).Raheem Sterling scored his 150th career goal, netting 136 for his two clubs Liverpool and Man City and 14 for England, with 12 of those 14 for the Three Lions coming in his last 14 appearances. Tonight was Gareth Southgate's 50th match as England manager, winning 30 of his first 50, the same as Roy Hodgson managed. Only Walter Winterbottom and Alf Ramsey have won more of their first 50 games as England boss (33).Dominic Calvert-Lewin became the first Everton player to score a brace for England since Wayne Rooney in 2004 against Croatia, and the first player with a hyphenated surname to score twice for the Three Lions since William Bromley-Davenport in 1884 against Wales.England had 22 shots in the first half, three more than San Marino managed in the entirety of their last World Cup qualifying campaign (19).Ollie Watkins became the first Aston Villa player to score on his England debut since Darius Vassell in February 2002 against the Netherlands.Mason Mount created eight chances in open play in this game, the most by an England player since Glen Johnson against Andorra in June 2009 (also eight).

England travel to Tirana to face Albania in their next Group I fixture on Sunday, 28 March (17:00 BST) before hosting Poland at Wembley on Wednesday, 31 March (19:45 BST).