England grind to 170-3 from 70 overs after being set 273 to win by New Zealand as first Test ends in a draw; Dom Sibley scores 60 not out from 207 deliveries as hosts opt against final-day run chase; series all square heading into second and final Test at Edgbaston from Thursday 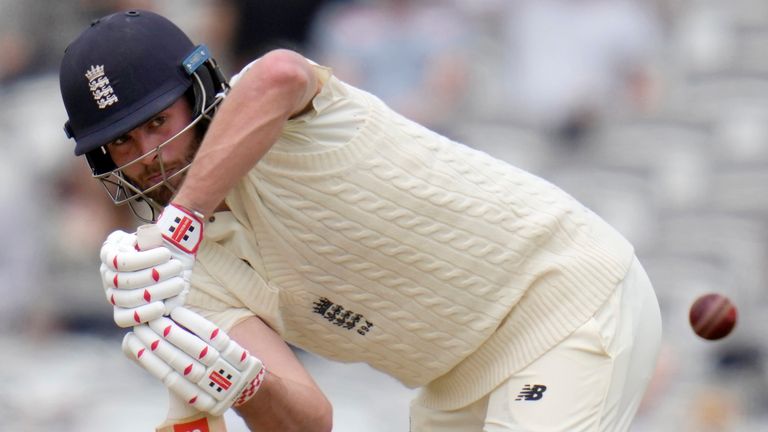 The best of the action from day five of the first Test between England and New Zealand from Lord’s.

Dom Sibley dropped anchor for 60 not out from 207 balls as ​​​​​​England battled to a draw rather than chased victory on day five of the first Test against New Zealand at Lord’s.

The hosts were set 273 to win from 75 overs after Kiwi captain Kane Williamson declared on 169-6 at lunch with his side having added 107 runs to their overnight score of 62-2 during the morning’s 22.3 overs.

England, though, showed no appetite to attack and it was the tourists who gave themselves a glimmer of hope of victory when Joe Root’s men slipped from 49-0 to to 56-2 shortly before tea following the exits of first-innings centurion Rory Burns (25 off 81 balls) and Zak Crawley (2 off 25).

Sibley, who struck just three fours, and Root (40 off 71) snuffed out New Zealand’s faint victory chances with a third-wicket stand of 80 and handshakes were taken at the 70-over mark with England 170-3, and Ollie Pope (20no off 41) alongside Sibley.

The sides remain all square heading into the second and final Test at Edgbaston from Thursday, which is live on Sky Sports Cricket.

Sky Sports commentator Simon Doull had expected his countrymen to play conservatively on day five but the Black Caps came out with intent, quickly swelling the lead of 165 they had already accrued.

Ross Taylor was particularly aggressive, striking two sixes in a 33-ball 35 – the first off Ollie Robinson and the second off Mark Wood – before he snicked Wood behind to England wicketkeeper James Bracey. 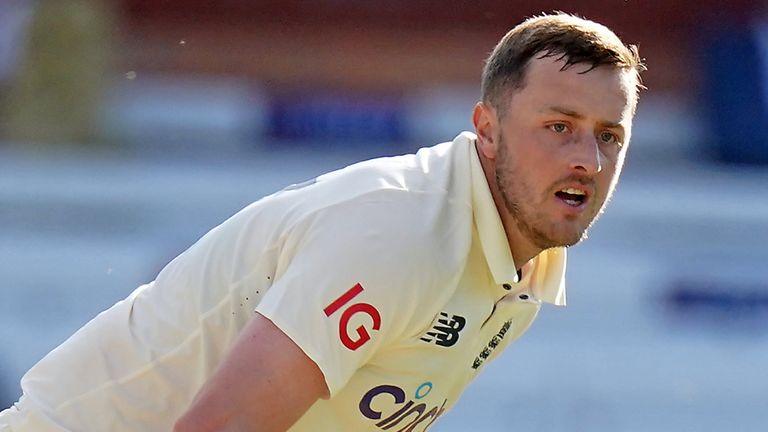 Taylor would have been out lbw to James Anderson on 31 but England were out of reviews, having lost their second looking for Taylor leg before to Robinson when the veteran batsman was on 11.

Robinson had made the first breakthrough of the day, claiming his third wicket of the innings and seventh in t he match when he bounced out nightwatchman Neil Wagner (10) as he continued an excellent debut on the field, albeit one that has been marred by the re-emergence of some unsavoury racist and sexist tweets he posted when he was a teenager.

Ollie Robinson is the first England player to take seven wickets on debut since Toby Roland-Jones against South Africa across London at The Kia Oval in 2017.

Stuart Broad, meanwhile, had Tom Latham (36) dropped by Crawley at midwicket on 32 but trapped his man lbw later on with a fantastic in-swinger as he claimed his first wicket in six Test innings.

Henry Nicholls (23) – who, like Taylor, played a selfless knock in the hunt for quick runs – was the fourth and final man to fall in the morning, out to Root on the reverse sweep, with Burns taking the diving catch at slip.

Burns was in his batting gear when the second session started and went on to add a patient 49 with Sibley, who avoided a pair and then reached double figures for the first time in seven Test innings.

The England openers accumulated just 29 runs in the first 15 overs, which included five maidens on the reel from Kyle Jamieson with the new ball. 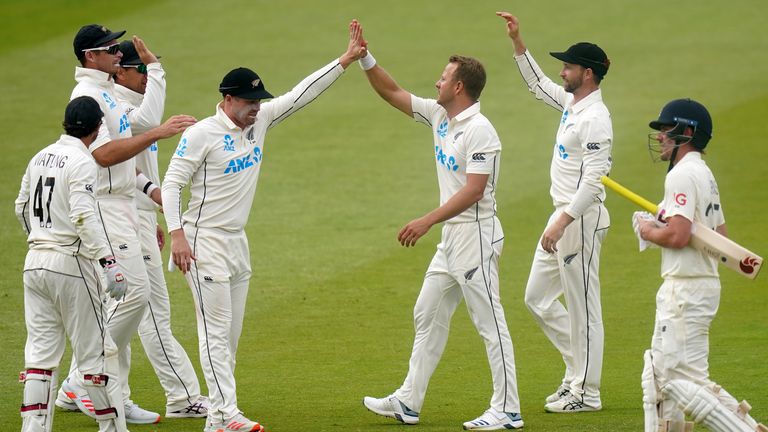 Burns and Sibley’s obdurate stand was snapped in the 24th over when the former snicked Wagner low to Tim Southee at slip, the dismissal ending Burns’ hopes of an eighth fifty-plus score in a row in red-ball cricket.

Sibley could have gone bowled Wagner caught Southee shortly after but his thick edge behind flashed past the diving slip fielder during left-armer Wagner’s excellent spell of 1-9 from 10 overs either side of tea.

Crawley’s edge did pick out the fielder, though – the Kent man slashing Southee to Nicholls at gully in over 31 as he fell for two for the second time in the game and handed Southee his seventh scalp of the match

Sibley and Root were tested by some fine bowling from Southee and Wagner early in the final session but the game petered out into a draw, with Root’s dismissal, lbw to Wagner, coming too late to change the result.

Fans inside Lord’s were not treated to the thrilling finale that had looked possible following Williamson’s bold declaration after a morning session which ended 10 minutes early due to light rain.

​​​​​Watch day one of the second Test between England and New Zealand, at Edgbaston, live on Sky Sports Cricket from 10am on Thursday.