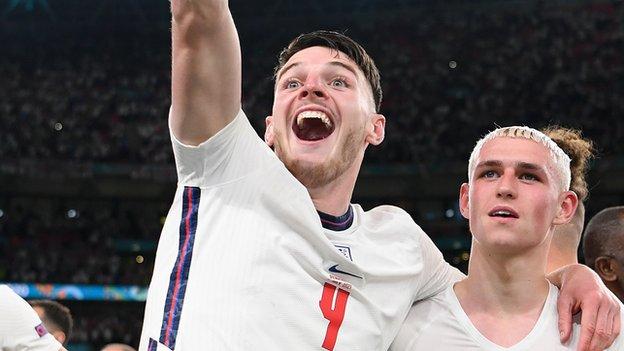 Most parents will say the birth of their children was the best day of their lives.

But what if your baby was born while England were reaching the final of the European Championship? And what if your brother was playing in the game?

That's exactly what happened to England midfielder Declan Rice's brother on Wednesday as the Three Lions beat Denmark in the semi-finals.

The West Ham star learned of the birth of his new, minutes-old niece at the final whistle, who arrived in the world at the exact moment Harry Kane scored the winning goal.

Speaking to BBC Sport, a delighted Rice said: "My brother has literally had a baby, as the second goal went in. He's crying his eyes out, he's had a little girl. It's a special night all round!"

Quite understandably, Rice said his "emotions are all over the place" as England's men reached a first final of a major tournament since they won the World Cup 55 years ago.

"A first final since 1966," he said. "I so want to do it for the people at home. Seeing the reactions – I'm a fan as well. I wish I was with them cheering, we've not won anything yet. Italy are a top side but we're ready."

Obviously, we are delighted for the whole Rice family for their new arrival, and really hope, for mum's sake, having the match on in the background wasn't too distracting…