The players are standing up for equality – FA chief executive

England fans are being urged "to drown out boos with applause" by the Football Supporters' Association and Kick It Out during Euro 2020.

England's players were booed before their two friendlies in Middlesbrough last week while taking a knee, which they do to highlight racial injustice.

"We would urge you to think about how booing impacts the players," said Kick It Out chief executive Tony Burnett.

"The issue we all want to address is tackling discrimination in football."

The chief executive of the anti-racism organisation added: "That's something we can and should all get behind.

"Gareth Southgate and the England players have made their position really clear – they are taking the knee as an anti-discrimination gesture, it is in no way linked to any political organisation.

"All of us England fans, myself included, want to see England succeed in the Euros, so we are asking for fans at the games to drown out boos with applause and show the players we are behind them."

England taking the knee: Why some fans say they are booing playersFA plans video message to stop 'incredibly disappointing' booing

England open their Euro 2020 campaign against Croatia at Wembley on Sunday (14:00 BST).

"Fans who make their first act after the referee's whistle booing their own team's stance against racism, should be ashamed of themselves," said the FSA's chief executive Kevin Miles.

We Are England: Krept & Konan discuss their new England anthem with Gareth Southgate

Booing was drowned out by applause before last week's games, which former England captain Rio Ferdinand said was "refreshing to see".

"That's the power of those people, because there's more that are positive and understand the reasons for players taking the knee," he added.

"I'd shout to the fans to make sure you continue doing that because we want to be behind these players.

"They're taking the knee for the right reasons, so back them to do well in this tournament. They need all the help they can get."

Two-thirds agree the England team belongs to every race 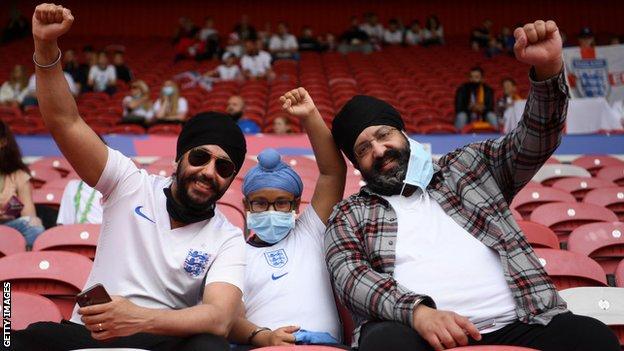 Kick It Out and the Football Supporters' Association spoke out on the day that a new report claimed following the England team can be unifying for people of different backgrounds.

More than 5,500 English citizens were asked if the national team belongs to people of every race in England, and two-thirds of both white and ethnic minority respondents agreed.

Krept and Konan: 'Everyone's got a different idea of England'

Some 77% of white people asked agreed that being English is open to people of all ethnic backgrounds who identify as English, while 68% of ethnic minority citizens agreed.

However, 14% of white people said they believe only white people can be considered English. The figure was 19% among ethnic minorities.

The researchexternal-link was conducted on behalf of British Future by the Centre for English Identity and Politics at the University of Southampton.