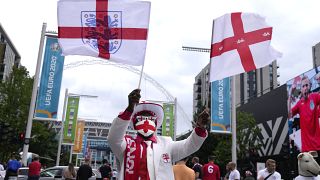 An England fan waves flags outside Wembley Stadium in London, Wednesday, July 7, 2021, ahead of the Euro 2020 soccer championship semifinal match between England and Denmark.

England will be the clear favourites in London on Wednesday as they clash with Denmark in the last semifinal match of the UEFA European Football Championship.

Up to 60,000 fans will be allowed in Wembley stadium for the match which will determine who takes on the Italians in the final on Sunday.

The Italians beat Spain in a shootout on Tuesday after the match went into extra time.

Italy advance to Euro 2020 final after shootout win over Spain

Danish coach Kasper Hjulmand said the team was excited and confident while admitting that they were the underdogs.

“We are for sure not the favourites, of course. But, our mentality is not to play football like underdogs – just defending and hope,” said Hjulmand.

“Our mentality is to try to take control and be proactive as much as possible.”

England manager Gareth Southgate said he thought the team was ready for the game and knew there was a lot of support throughout the country.

“We’ve never been to a European Championship final, so we can be the first, which is really exciting for everybody,” he said.