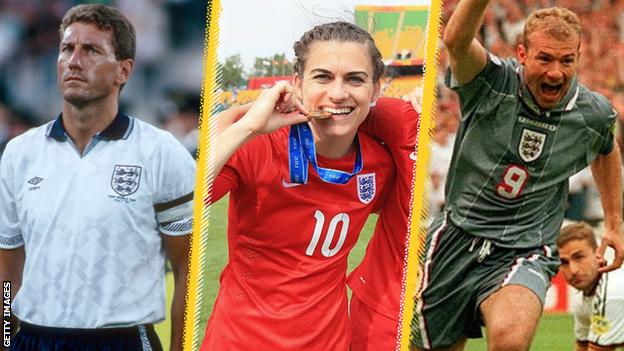 Terry Butcher, Karen Carney and Alan Shearer have all played in semi-finals at major tournaments for England

Playing in the semi-finals of a major tournament does not happen often and, for many, it is a once-in-a-lifetime opportunity.

For generations of England players – from Italia 90, Euro 96, Women's World Cups in 2015 and 2019 and the 2009 and 2017 Women's European Championships – they are matches that define careers. Perhaps even lives.

On Wednesday, Gareth Southgate and his squad have the chance to do something no England team has done in 55 years: reach a major tournament final.

So what did the players who have been there before – and failed to make that final step – learn from those painful experiences? And what advice would they give to their Euro 2020 counterparts?

'An opportunity to bring happiness to nation' – SouthgateWho stands between England and Euros glory?Listen to the latest Daily Euros podcast from BBC Radio 5 Live

Gary Lineker – Who says you can't win with kids? 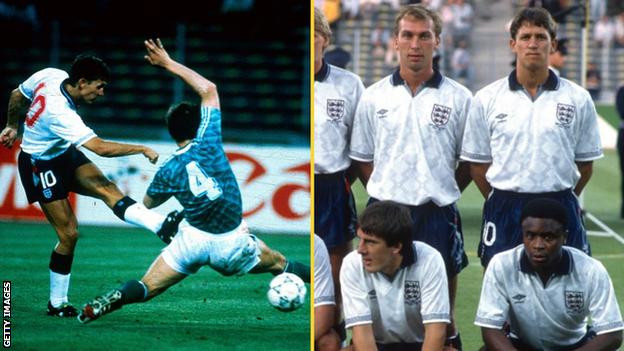 Former striker Gary Lineker scored four goals during the 1990 World Cup and equalised for England in the semi-final but West Germany went on to win in the penalty shootout.

It's a long time since I was involved in a major tournament semi-final. We barely had any time after the quarter-final so all we were really thinking about was how we were going to get our tired bodies onto the pitch.

You don't get quite how mad the country is going when you're away with the team so we were a bit cocooned, and of course there was no social media.

But you knew the magnitude of it. These players have that experience and that will help them. They are good young players, many of whom have won tournaments at youth level, so they are much better placed than we were in 1990.

I wouldn't tell myself anything different but I would have told Peter Shilton to dive a little bit earlier on each penalty.

Alan Shearer – Why you need to enjoy every minute 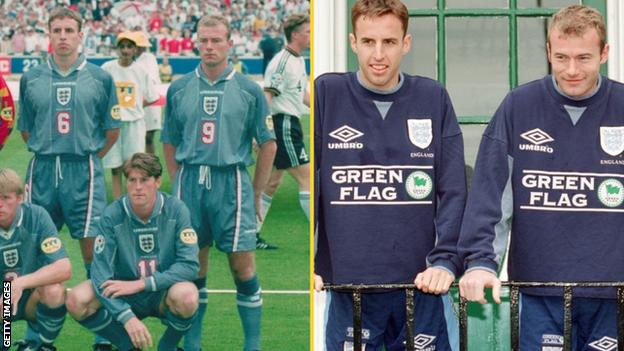 Alan Shearer finished Euro 1996 as top scorer and netted the opener in the semi-final penalty shootout defeat by Germany. The striker played alongside current England manager Gareth Southgate. He presented a documentary about Euro 96 in which he discussed his memories and wrote a column this week in which he gave his message to the current players.

In everyone's life there are moments when you look back and think 'what if?' Memories that keep you awake at night, replaying them over and over again.

That semi-final in 1996 remains the biggest game I've ever played in. The atmosphere and the build-up was indescribable. I'll never forget it. I still get goose bumps thinking about it.

My message to England's players as they prepare for their Euro 2020 semi-final is pretty simple – everyone is behind you, so enjoy every minute of it.

I remember popping out of the team hotel and going to get my hair cut in 1996 and when I got out of the taxi in Burnham town centre, there was a kind of street party going on. There is going to be more of the same this time too.

You can't escape the atmosphere, but then you don't really want to – it's an incredible feeling, knowing the whole nation is supporting you on a stage as big as this.

Bring it on, because I can't wait.

Karen Carney – How to be the difference maker 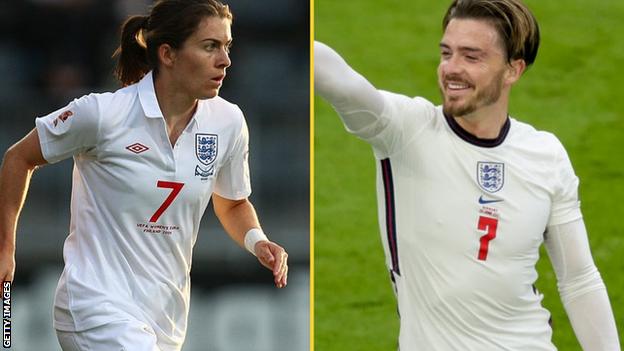 Former attacking midfielder Karen Carney was involved in two Euro semi-finals (2009 and 2017) and two World Cup semi-finals (2015 and 2019). She came on as a substitute in three of them and assisted the winner in extra time to send England through to the Women's Euro 2009 final.

All the semi-finals were different experiences. It felt like there was more expectation on us in 2019. It was our third semi-final in a row and we just felt like we needed to get to a final. Looking back, I should have drawn more on the experience of the 2009 semi-final that got us to the final.

There was an expectation in 2019 but it's about handling that. You have to have confidence but not arrogance and I think this England team have that.

One of the hardest things off the pitch is managing people. There will always be players who are disappointed they aren't playing much. I played in every game up until the semi-final in 2009 and manager Hope Powell didn't play me. I asked her why and she told me it was because of the bigger picture. I didn't understand that as a young player.

That's where the team behind the team become so important. I remember having conversations with the kit man, Pat. It gave you the opportunity to get things off your chest and you were able to move on. Those members of the team are so important. They keep everyone going in the same direction. Every member of the staff is part of the bigger team and it's vital they buy in as well.

One of my favourite sayings is 'be the difference with the things that make you different'. Jack is different.

We are creative players – so you have to make the difference when you get your chance. Sometimes it can be risky because to be creative, you have to do something that might not always work. You have to try it though. You can see that as a challenge and embrace it – which I think Jack will.

Terry Butcher – From one captain to another 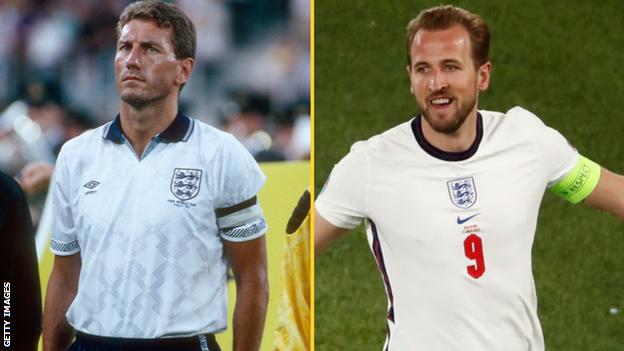 Former England captain and centre-back Terry Butcher played in the 1990 World Cup semi-final against West Germany, which they lost in a penalty shootout.

Playing in the World Cup semi-final was where you wanted to be. Our progress was stop-start. We had gained some momentum and were maybe a bit fortunate to get through against Belgium and Cameroon.

We were thinking 'we haven't really played yet, we haven't shown what we can do'. But there was a lot of optimism. It felt good. It felt right. The system was good. Our families were coming out to watch. You hoped it was going to happen.

I'm sure this group of players feel the same and that's what I would say – grasp this wonderful opportunity. Embrace this occasion, this chance. If I could say anything to my younger self now, it would be to make this a special moment in your life and in the lives of England supporters.

A lot of these players have played in big European games and won titles. They are very experienced in winning things but they will feel this is the stage they belong on.

My advice to Euro 2020 captain Harry Kane: Keep leading by example. Keep believing in yourself. Give us your strength. Give us your character. Go out there and be Harry Kane. Be what you are – nothing else – and that is enough. You'll get chances and you will score because you're that good.

Steve McMahon – You rarely get second chances, so take them 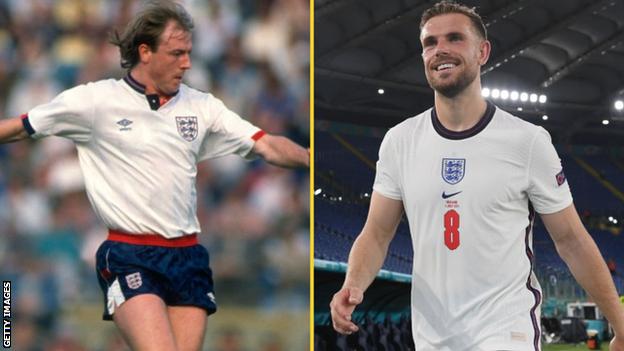 Steve McMahon made 277 appearances for Liverpool, while current Reds captain Jordan Henderson has played 290 games for the club

Steve McMahon made four appearances at the 1990 World Cup as England reached the semi-finals but the midfielder was an unused substitute in the defeat by West Germany.

They can't let the occasion take over. They have to play the team and not the occasion. The fear of failure brings pressure anyway. If England don't win, it's a failure. Football is all about pressure because we have everything to lose.

I wasn't picked to start but I remember halfway through the game, when Gazza [Paul Gascoigne] got the yellow card and knew he would be suspended, I was his natural replacement. I immediately thought 'if we win this game, I'll be playing in a World Cup final'. The emotions were running high but the result didn't come our way. That was a strange feeling.

My advice to Jordan Henderson, another Liverpool player who might also be waiting for his chance: These things can pass you by. It might be your only opportunity. You rarely get second chances. It's a wonderful opportunity… make the most of it!

Jordan is so professional. On and off the pitch he has proven he is ready when needed. He came off the bench in the quarter-final to score a fantastic goal. He doesn't sulk and he gets on with his game. He has been proactive and behind the scenes he has been a great person. He's in the squad for his leadership qualities as well.