Roy Hodgson sat behind a desk in Chantilly uttering the words that would become his epitaph as England manager: "I don't really know what I'm doing here."

Hodgson meant he did not understand why he was being forced to attend a press conference the day after he had resigned following the humiliating defeat by Iceland in the last 16 of Euro 2016 in France.

However, it was a comment that worked on many levels.

It perhaps reflected the scrambled state of mind of a decent man and manager who had presided over possibly England's worst ever performance.

This is what England do to you. They offer hope, despair, optimism, pessimism, elation, misery. Quite often in the space of the same 90 minutes.

Five years on from the embarrassment of Nice, England have the chance to experience their biggest high since the 1966 World Cup win when they face Italy in the Euro 2020 final at Wembley Stadium.

This is the moment many England fans, and those of us who track these events at close quarters, thought we would never see.

Is this landmark day going to be glorious payback for the years of falling short? A nation turns its eyes to Gareth Southgate and England.

Observing England may be many things but it is never dull, especially for those of us who have travelled this particular road in one form or another for 25 years.

It was an ominous sign that the first England game I covered, in a previous journalistic life, was the agonising loss on penalties to Germany in the Euro 96 semi-final. It was perfect preparation for events to come.

I have covered England for the BBC at every major tournament since 2002 and, as would become a regular occurrence, there was plenty of optimism on the flight to Osaka's Kansai Airport.

And, apart from at the 2018 World Cup in Russia and this glorious delayed Euro 2020, it was misplaced.

The Japanese city of Sapporo provided the high point of England's 2002 World Cup campaign, hosting a victory for Sven-Goran Eriksson's side against Argentina under the Superdome, all played out amid lingering resentment from the South Americans' acrimonious victory over England on penalties at France 1998.

The morning after the night before, one unwitting England reporter making his exit mistakenly jumped on to the waiting Argentina team bus.

No names – let us say for the sake of this story that it was the Press Association's legendary England scribe John Curtis – but he greeted a still boiling mad Argentina striker Gabriel Batistuta with the unwise words: "Sorry Gabriel mate. England media bus. You need to get off and get on your own bus."

Cue this poor unfortunate being manhandled off the coach and bundled into the hotel foyer, closely followed by his luggage, to the strains of a Mexican mariachi band entertaining the guests.

But the laughs did not last long. Elimination came with a quarter-final loss to eventual champions Brazil, the sight of a slowly backpedalling David Seaman still clear in the mind's eye as Ronaldinho's free-kick looped over him. The veteran was later ushered past the waiting media in tears, accompanied by a Football Association representative.

Qualification has always been relatively straightforward and competitions difficult but Euro 2004 must always be regarded as the one that got away under Eriksson's laid-back, star struck regime.

A superb England team was bolstered by the emergence of Everton's explosive teenage superstar Wayne Rooney as the tournament was engulfed by "Roo-mania".

The phenomenon captured global attention, calls being taken from all parts of the world seeking the flimsiest piece of unknown information about the England striker.

Those of us who attended the same school as him, much earlier obviously, basked in this reflected glory when asked to tell his story.

As ever, England were a huge story.

As ever, it ended in bitter disappointment, a loss on penalties to Portugal in the quarter-finals in Lisbon's iconic Stadium of Light.

Rooney left that game early with a broken foot as England's hopes were sabotaged by his injury and a Sol Campbell goal controversially disallowed.

Greece won Euro 2004. The rest of us wondered how England had not.

The list of near-misses and misfortune seemed endless until the hope of these past four weeks.

Eriksson's reign ended two years later in the circus of Baden-Baden at the 2006 Germany World Cup, with that beautiful town overtaken by WAGs and the attendant paparazzi, turning England's actual football into a sideshow.

Ashley Cole's then wife Cheryl and David Beckham's wife Victoria were the centre of attention and a small bar named Garibaldi's became WAG HQ, the owner's ship sailing lucratively into town on a nightly basis.

England's performance at the tournament probably needed overshadowing, again eliminated by Portugal on penalties at the quarter-final stage, this time hampered by a red card for Rooney, sent off for lashing out at Ricardo Carvalho.

Fabio Capello followed as England manager and was supposed to bring a winning mentality and a stern authority. One out of two was not enough.

Instead, the South Africa World Cup in 2010 produced an England campaign of unrelenting misery, turgid football and eventually a complete and utter pasting.

As low points go, it takes some beating but England have certainly tried until Southgate's superb renaissance.

Capello appeared to lose the plot completely on the eve of the tournament with the advent of a commercial enterprise called The Capello Index, which rated the performances of players. Not ideal when it involved his own.

As we trooped into the lavish surroundings of so-called 'Camp Capello' at the Royal Bafokeng Sports Campus outside Rustenburg, even the most casual observer could detect a truly rotten atmosphere.

One player said: "When we open our windows, we could be anywhere. You wouldn't know you were even in South Africa in this place."

Capello turned on the media, ranting at a photographer he wrongly assumed was taking pictures of the treatment room.

England's grim performance in a 3-0 warm-up win over local team Platinum Stars had the optimists among us confident they were not as shoddy as they looked, and they were simply keeping their powder dry.

How wrong we were.

Amid stiff competition, the goalless draw with Algeria in Cape Town is the worst international game I have ever covered. The game when literally nothing happened.

At least not until a frustrated Rooney turned his frustration on a TV camera and attacked England's critical fans, a blessing in disguise for those of us needing something spicy to say. 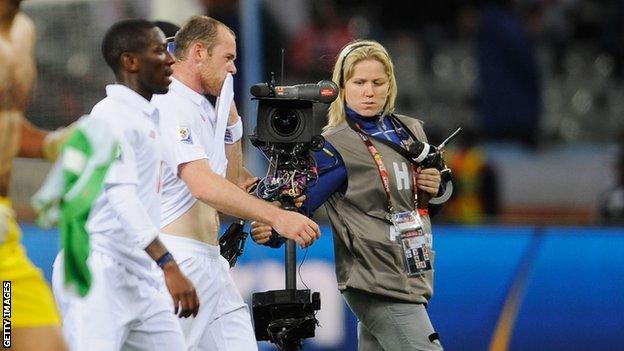 'Nice to see your own fans booing you'

The team and fans had become detached, a world away from what we have seen at Euro 2020.

Not even the controversy surrounding Frank Lampard's shot – not given as a goal despite bouncing over the line – could rescue any consolation from a 4-1 loss to Germany in the last 16.

Euro 2012 was almost a free hit for the recently appointed Hodgson, in after Capello's resignation, but old habits die hard and once again it ended with defeat, this time against Italy on penalties in the quarter-final.

It almost ended in arrest and a period of incarceration for this reporter after a foolish attempt to defend comedian Bernie Clifton in a discussion with a large-hatted Kyiv policeman trying to move on England's brass band.

Having been wrongly identified as the band's manager by a "mischievous" colleague, the explanation that Clifton was an English national treasure famous for running around with an ostrich between his legs cut no ice, unsurprisingly, with the forces of the law.

That episode raises a smile now, but looking back at Hodgson's reign does not.

He had been England manager for two years when the World Cup landed in the location of the sport's romantic dreams, Brazil, with the final at the iconic Maracana Stadium.

England's preparations in Miami lasted longer than their actual involvement in the tournament, out after successive defeats against Italy and Uruguay. We learned their fate as phones started pinging on touchdown back in Rio after Costa Rica had beaten Italy.

In a reflection of the time, expectations were so low that England were actually applauded off by their fans after a dismal goalless dead rubber against Costa Rica in Belo Horizonte completed the campaign.

Throw in another shambles at Euro 2016 and this is what makes the renaissance under Southgate and a group of players the nation has come to love so satisfying.

Bonds that never existed before, especially in the era of the so-called 'Golden Generation', have been forged here.

Being around England has become a more relaxed experience – and what a joy it is to see them winning regularly, when the pressure is really on.

It has been a long time since Japan in 2002, many thousands of miles, occasional joy, much misery and tales to tell – but the Euro 2020 final now offers up the prospect of the happy, glorious ending so many following this story thought would always remain elusive.