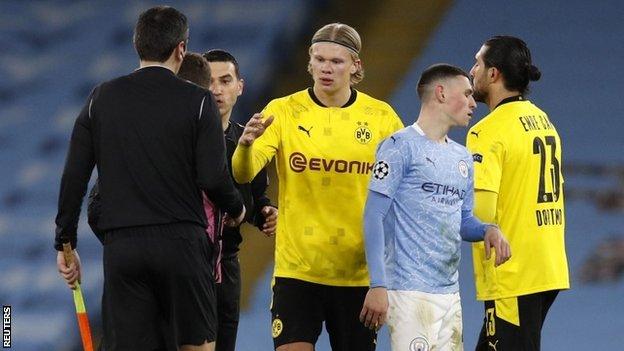 Erling Braut Haaland has become such a superstar, even match officials appear to want his autograph.

After Borussia Dortmund's 2-1 defeat by Manchester City in the Champions League quarter-final first leg, one of the Romanian assistant referees followed Haaland down the tunnel at Etihad Stadium, with his flag under his arm, and appeared to get him to sign a red and yellow card he produced from his top pocket.

"You shouldn't be [doing that] anyway," said BT Sport pundit Owen Hargreaves. "The officials had a job to do and a difficult first half. They got a lot of things wrong. You can be a fan but you can't do that in front of other players, it doesn't look right."

"Maybe he's a fan of Haaland," said Guardiola. "Maybe it was for his son or daughter.

"I've never seen it before, but the referee and the linesman were correct, they did a good job. That's all."

Referee Ovidiu Hategan and his team were involved in two controversial incidents in the first half, most notably the decision to disallow a Jude Bellingham goal.

The English teenager thought he had equalised for Dortmund as he beat Ederson to a through ball and tapped into an empty net, but the official blew for a foul on the goalkeeper and booked Bellingham.

Replays indicated it was not a foul but since play had stopped after the whistle was blown, it was not overturned by the video assistant referee.

Bellingham said: "I definitely think I won the ball fairly, it's a bit frustrating in a time when they've got so many cameras watching the game they don't wait for me to put the ball in the net and then check it."

They also awarded City a soft penalty when Emre Can did not catch Rodri – but that was overturned by the VAR.

Phil Foden's late winner gave City a 2-1 win. Kevin de Bruyne had put the English champions-elect into the lead but Haaland set up Marco Reus for an equaliser.