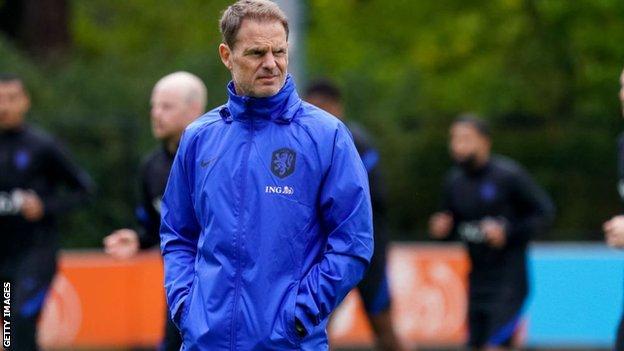 Frank de Boer took over as Netherlands boss in September 2020

For the coach with the shortest reign in Premier League history, a shot at redemption may come just 20 miles from the scene of his managerial low.

Frank de Boer's Crystal Palace side failed to win any of their four top-flight games or score a goal during his 77 days in charge at Selhurst Park and he was called the "worst manager" in the competition's history during a spat with Jose Mourinho.

Initial excitement among fans at attracting a high-profile name turned to disappointment as the Dutchman failed to implement the approach that saw him win four Eredivisie titles with Ajax.

De Boer, who turned down advances from Liverpool during his time in Amsterdam, eventually arrived in south London via an 85-day spell at Inter Milan in what he calls a "difficult time" for the Italian club.

But four years after his Palace exit, the 51-year-old will lead the Netherlands into their first major tournament since 2014 and would undoubtedly silence any critics if his side were to step out at Wembley for the European Championship final on 11 July.

"I am not feeling the pressure," De Boer tells BBC Sport. "For me, I am used to it and we know how the Dutch fans are – if we start well then suddenly that hype comes into the Netherlands and that is fantastic to watch.

"We are not walking away from that pressure, we like that and hopefully we can manage that. We have already played so many finals that we lost and also especially semi-finals.

"Hopefully we can manage to do something more and lift up that trophy. That is our goal, but it is a very big step we have to take."

Why did De Boer get the nod?

Ronald Koeman had long coveted the Barcelona job and when he stepped down as national team boss last summer to head to the Nou Camp, it was De Boer who was chosen to pick up the mantle.

Koeman had steadied the ship after a barren spell for the national team in which they missed out on a place at Euro 2016 and the World Cup two years later, reaching the inaugural Nations League final and qualifying for Euro 2020.

Former boss Frank Rijkaard and then-Bayer Leverkusen manager Peter Bosz were reportedly in the running, but it was De Boer – whose most recent job was with Atlanta United in Major League Soccer – who was tasked with continuing the Netherlands' upward trajectory.

"It was due to the success he had at Ajax in helping the younger players to grow and realise their responsibilities," explains Dutch football expert James Rowe. "He is also extremely well respected as a player, being capped as many times as he was and being part of many major tournaments.

"At Inter, he went into the changing room with no command of the local language and Crystal Palace was a great opportunity for him, but asking Palace players to play in an Ajax model where children learn from the age of six or seven what's expected from them, those two jobs maybe came a little bit too soon."

'To create a good vibe is very important'

The national team job offers a different challenge for De Boer but one he is familiar with, having been assistant manager when the Netherlands reached the World Cup final in 2010, losing 1-0 to Spain in South Africa.

"It is a totally different job, that's for sure," he says.

"Not when you are on the field with the guys, but more the preparation. In normal circumstances as a club trainer you work 24 hours a day with your players and all year long, now it is every month or sometimes two or three months that you don't see the guys.

"Also mentally for yourself it is different. I have to admit this is more relaxed than as a club coach, but it is also very intense when you get those 10 days or 12 days together, and you have to put everything into those small two weeks.

"You want to give a lot of information – the way you play, what you expect from your team and individual players, and the risk is you want to do too much because they can cope with a bit of information and everybody knows when players are overthinking, normally it is not the right way."

The former Ajax and Barcelona defender can also draw on his own experience of international camps as a player, winning 112 caps and playing at five major tournaments, twice reaching semi-finals.

"What I learned when I was a player for the national team is to be a people manager, to have a good relationship with the team," he explains.

"The environment and ambience in the team has to be really good because you know everybody who will be in the squad will have amazing qualities, and you cannot teach them to play football, they already know that."

'We have made good steps forward' 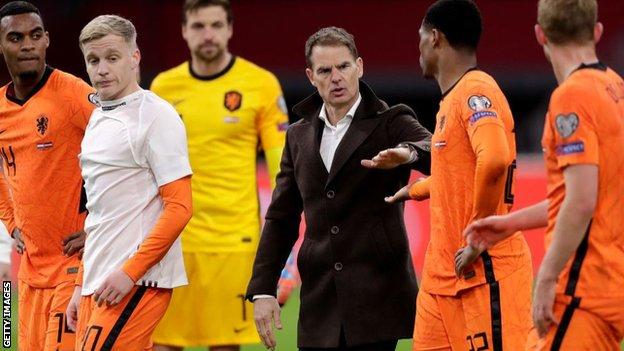 The Netherlands also have the advantage of playing their group games against Ukraine, Austria and North Macedonia in front of home fans, with 16,000 supporters allowed to attend Amsterdam's Johan Cruyff Arena.

De Boer, who captained the side the last time a major tournament was played on Dutch soil at Euro 2000, will lead his team into their opening fixture against Andriy Shevchenko's Ukraine on the back of 11 games in charge that have seen five wins, four draws and losses to Mexico and Turkey.

"It is a great honour to be leading, maybe at this moment, the most important thing in Holland," says De Boer. "Hopefully we can get the results we want.

"If you know the Dutch, they always expect to be champions. When you have a bad cycle like us, not involved in two tournaments, if you then play two or three times good they directly put you as favourites again."

The pandemic has meant it has not been exactly the experience the well-travelled coach expected, with De Boer hoping to use his time to visit players and managers, while the Euros' postponement has left the Dutch without Liverpool defender Virgil van Dijk but welcoming back forward Memphis Depay.

"What I was really looking forward to was to meet players and head coaches, like Jurgen Klopp or Pep Guardiola and other top coaches, to discuss with them about players and their philosophy," explains De Boer, who captained the squad at the 1998 World Cup, making that pass for Dennis Bergkamp's last-minute winner against Argentina in the quarter-final.

"In 1998, from the start of the season I was really focused on being well and doing well at the World Cup," says De Boer.

"A lot of our players will have had the same feeling and suddenly they had to put everything aside and put that focus and that energy on hold for a year. That is sometimes difficult."

But it also means another year's experience for some of the nation's young stars, such as defender Matthijs de Ligt and midfielder Frenkie de Jong.

"We have made some good steps forward," says De Boer. "[We have] a good mixture right now of young and experienced players and hopefully with that mixture we can have a good impact in this tournament."

Are the Paralympics unfair?: An investigation in the games classification systemKrept and Konan: Exploring Englishness in creating the Euro 2020 anthem
Source