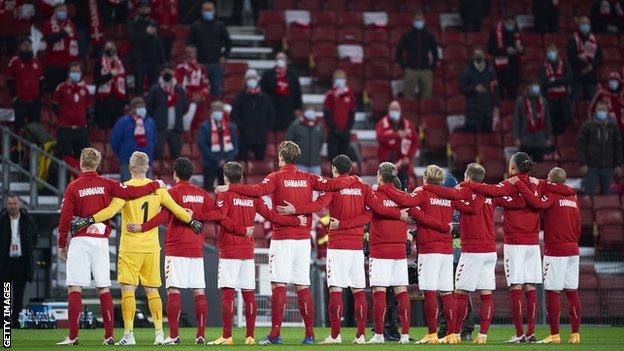 Denmark are set to have fans at their Parken Stadium for group games against Finland, Belgium and Russia

Denmark is set to allow "at least 11,000 to 12,000" fans to attend the European Championship matches the country will host this summer.

The tournament, delayed by a year because of the coronavirus pandemic, will take place between 11 June and 11 July.

Russia also expects to allow fans attend the four games it is hosting.

"The European Football Championship is a unique and historic event in Denmark," said a statement from the Danish culture ministry.

"The government has therefore decided to allow at least 11,000-12,000 spectators for the four matches at the Parken stadium.

"At the same time, we will look at whether there can be even more spectators in the Parken if health conditions allow.

"We have also informed the DBU [the Danish Football Union] and Uefa that it may be necessary to close to spectators if there is a spread of infection, so it will be unjustifiable from a health point of view to allow spectators to the matches."

Euro 2020: Glasgow and Dublin at risk of being cut from host cities

Uefa wants each of the 12 countries staging matches to submit their plans – including for the return of fans – by a deadline of 7 April.

The Russian committee's director Alexei Sorokin told the country's state-run RIA Novosti news agency he believed matches at the Saint Petersburg Stadium, which has a capacity of 68,000, could be played "with the minimum of possible restrictions".

"We are looking optimistically at the Euros," he said. "We already have an agreement to fill the stands to 50% capacity.

"We are working to welcome foreign supporters and this has not been rejected by the authorities."

The British government has said up to 10,000 spectators could be permitted inside English grounds from mid-May – and potentially larger numbers from 21 June.

The Scottish and Irish governments are yet to provide assurances on whether fans will be allowed back by June at their respective stadiums of Hampden Park and the Aviva Stadium.

As a result, they risk being cut from the list of hosts, with both stadiums scheduled to stage four games.

The English Football Association has said it is ready to host any additional games, but its chief executive Mark Bullingham said earlier this month the governing body was "not lobbying for anything".

Uefa has an executive committee meeting on 19 April, and a final decision is expected to be taken on host cities the following day.