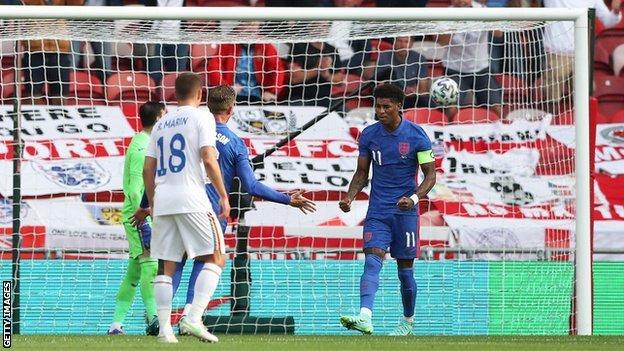 Gareth Southgate says he has one decision to make on his starting XI for the opening game of Euro 2020 against Croatia next Sunday.

England rounded off their preparations for the tournament by beating Romania.

Afterwards, Southgate said he had a good idea about the side he will put out for the first of three group games.

"There's probably one decision in my head, but we've got another week to get through," added Southgate, whose build-up has been hampered by injuries.

One of the biggest positives of Sunday's win was the return of midfielder Jordan Henderson for the first time since 20 February because of a groin injury.

However, Harry Maguire is likely to miss the Croatia match because of ankle ligament damage.

Southgate also has to decide who takes the place of Trent Alexander-Arnold in his 26-man squad.

The Liverpool right-back has been ruled out of the tournament because of a thigh injury. Standby players Ben Godfrey, Ben White, James Ward-Prowse, Jesse Lingard and Ollie Watkins are in contention to be added to the squad, with a decision to be made public on Monday.

"Every time over the last three months I've pieced a team together, that's changed rapidly and painfully with injuries," added Southgate.

"Let's hope we can get through to next Sunday without losing any more players."

Southgate will have seven players from Manchester City and Chelsea to choose from for Croatia, none of whom have featured in these warm-up matches following their involvement in the Champions League final.

It means some of the attacking players who are ordinarily stars for their clubs will not make the starting line-up – with one or more of Jadon Sancho, Marcus Rashford, Raheem Sterling, Jack Grealish, Phil Foden or Mason Mount likely to miss out.

"We have got some very big decisions and in that particular position some outstanding players," said Southgate.

"We're going to disappoint some players temporarily when we name the team for the first game but I can remember on numerous occasions where players have come into matches to be the match winners.

"I can remember the first game in France 98, no David Beckham, no Michael Owen. By the end David had scored the free-kick against Colombia and Michael was a world superstar. These things change very quickly."

A mixed return for Henderson

Henderson's return to action was not without incident.

Although he emerged unscathed from his 45-minute substitute appearance, he missed a penalty which would have doubled England's lead.

"It wasn't a great penalty, a good height for the goalkeeper," the Liverpool midfielder told BBC Radio 5 Live.

"I'm feeling very good, to get back onto the pitch was pleasing for me. I came through 45 minutes after a while out, so I'm delighted with that and to have another week's training until the first game -hopefully I can recover well.

"I am getting stronger all the time."

Southgate said he was expecting Dominic Calvert-Lewin to take the penalty.

Marcus Rashford, who had put England ahead from the penalty spot, and second-choice Ward-Prowse had been substituted when it was awarded.

"I was expecting Hendo to go over to Dominic and let him take it. We will pull rank next time," said Southgate.