England's footballers are preparing to face Italy in the final of Euro 2020 on Sunday, knowing victory will earn them a first major tournament triumph for 55 years.

On a night of nerve-shredding tension, and then unconfined joy, Gareth Southgate's side beat Denmark 2-1 in front of more than 50,000 ecstatic England fans at Wembley, to reach their first ever European Championship final.

Captain Harry Kane hit the winner in extra time to book a place against the Azzurri at Wembley (20:00 BST kick-off).

If England win, it will be their first major tournament victory since winning the World Cup in 1966.

The final whistle was greeted by scenes of jubilation and celebration in towns and cities across England.

"I'm just so pleased for our country," said boss Southgate, who punched the air at the final whistle.

"We know what our country like others has been through and to continue that happiness and journey for anther four days, we're so happy."

England's ecstatic players celebrated on the pitch in front of their fans at full-time by singing 'Sweet Caroline' which fans have been chanting throughout the tournament.

"It was mayhem on the pitch at full-time," added Southgate. "As soon as Sweet Caroline was playing that was it."

Former England striker Gary Lineker told BBC One: "It's finally happened. I was doubting I'd ever see it again in my lifetime at one point."

There was a surprise waiting for midfielder Declan Rice after the match. The West Ham star learned of the birth of his new niece, who arrived in the world at the exact moment Kane scored the winning goal.

Speaking to BBC Sport, a delighted Rice said: "My brother has literally had a baby as the second goal went in. He's crying his eyes out, he's had a little girl. It's a special night all round!"

What is happening with tickets?

There will be at least 60,000 fans at Wembley for Sunday's showcase final, although there are reports a full crowd of 90,000external-link could watch the match.

Tickets for the semi-final against Denmark were selling on social media for thousands of poundsexternal-link on the eve of the game.

According to Uefa's website, tickets available to the general public for the final have sold out.external-link

Londoners are being offered the chance to see the final if they book a Covid-19 vaccination appointment. One pair of seats and 50 pairs for the fan zone in Trafalgar Square have been put up by the capital's mayor, Sadiq Khan.

Covid-19 travel restrictions mean Italy's supporters are unable to fly to England for the game.

However, UK-based Italian supporters who are fully vaccinated or can show proof of a negative lateral flow test from the previous 48 hours are allowed at Wembley.

How to watch the game?

The final will be shown live on both the BBC and ITV.

Pubs have been given permission to stay open an extra 45 minutes until 23:15 BST on Sunday, in case the final at Wembley goes to extra time and penalties.

A government spokesman said: "The entire nation's been gripped by the Euros and this will allow people to enjoy the match in pubs if they wish to do so."

Rice Rice baby! – Declan's double delight'This is not a team, it's a family'

What happened against Denmark?

England battled back from a goal down to beat Denmark after extra time after Mikkel Damsgaard had put the Danes ahead with a sumptuous free-kick – the first goal Gareth Southgate's side had conceded at Euro 2020.

On a night of huge excitement and tension, Schmeichel then produced a full-length dive to keep out Harry Maguire's header before Kane's winner from the rebound after Schmeichel had saved his penalty. 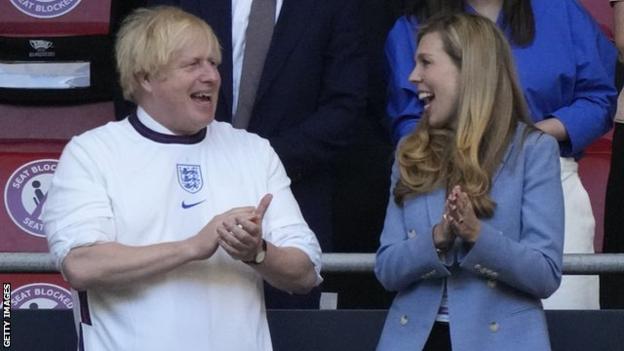 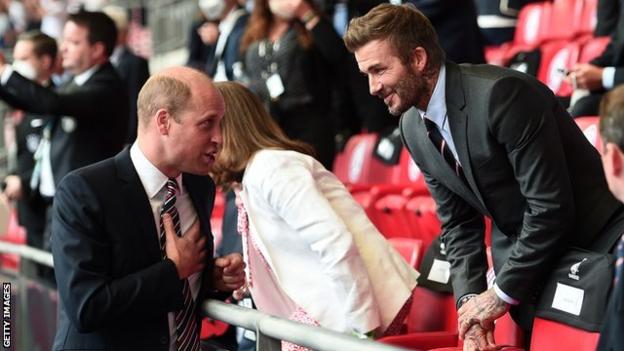 Among the crowd were David Baddiel and Frank Skinner, who famously sang the unofficial England anthem Three Lions, with its familiar refrain "Football's coming home".

There were jubilant scenes elsewhere as fans kitted out in England football strips and costumes gathered in designated fan zones, pubs and bars to see the historic win.

A party atmosphere broke out in Trafalgar Square in London after England scored their second goal, with several men moved to rip off their shirts and start dancing on tables.

Later, fans took to the streets of London to celebrate, with crowds gathering in Leicester Square and dozens of supporters climbing onto the Shaftesbury Memorial Fountain in Piccadilly Circus.

How good are Italy?

Italy failed to qualify for the 2018 World Cup but they have been on the rise since former Manchester City boss Roberto Mancini took charge in 2018.

They head into Sunday's final unbeaten in 33 matches and have been gathering momentum throughout Euro 2020 since their opening win against Turkey.

After overcoming Belgium, ranked number one in the world, and three-time European champions Spain in the knockout stage, they will fear no-one.

Their team includes veteran defenders Giorgio Chiellini, 36, and Leonardo Bonucci, 34, who have both impressed during the tournament.

Sunday will be the Azzurri's 10th major tournament final, and their fourth European Championship final.

Sunday's match will be the first time Italy and England have met since a 1-1 draw in a Wembley friendly in March 2018, Jamie Vardy putting the Three Lions ahead before an 87th minute equaliser from the penalty spot by Lorenzo Insigne.

The last time the two countries met at a major tournament, Italy won 2-1 at the 2014 World Cup in Brazil as the Three Lions finished bottom of their group.

Italy also knocked Roy Hodgson's Three Lions out at the quarter-final stage of Euro 2012 on penalties in Kyiv.

England have not beaten the Azzurri in the past three meetings.

Their last victory came in a friendly in August 2012, Jermain Defoe scoring the winner in a 2-1 victory.

'This is England's time'

Jonathan called BBC Radio 5 Live's 606 and said it was a "surreal feeling" to see England in a major final.

"I remember my first World Cup in 1990 – I was nine and crying in the semi-final when we lost to Germany," he added.

"This is England's time. We get to go again on Sunday and repay the Italians, they've caused us a lot of pain over the years."

Nelly called from Australia to say he had tears in his eyes.

"My wife is Danish – she very quickly went back to bed. We probably won't speak for 24 hours but who cares? I am so, so proud to be English. I'll be dancing in the streets in Sydney." 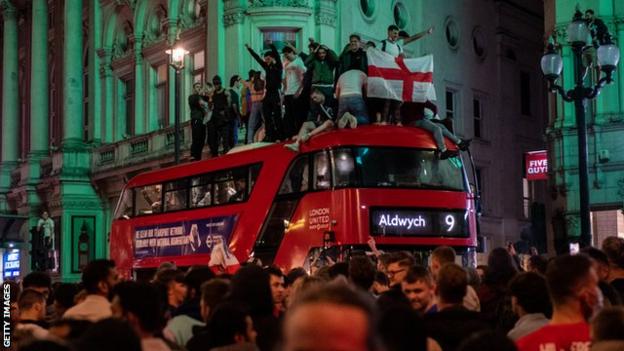 Fans celebrated in London after England reached the Euro 2020 final 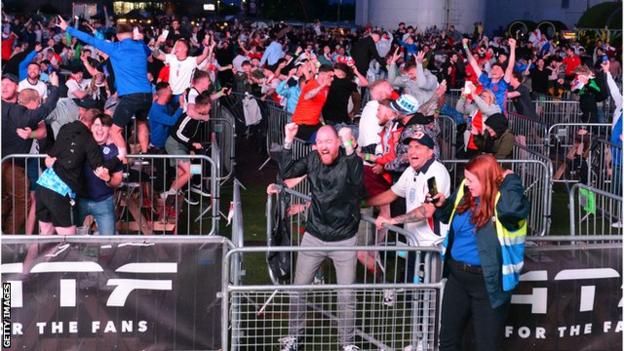 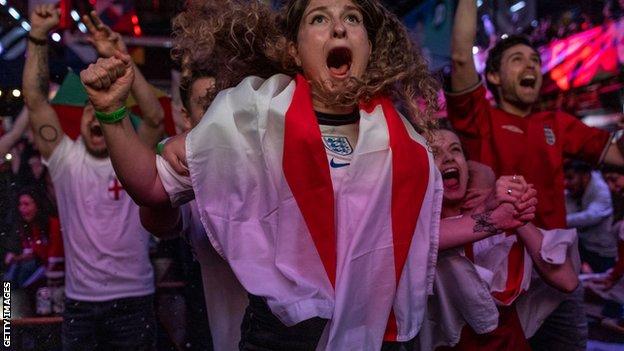 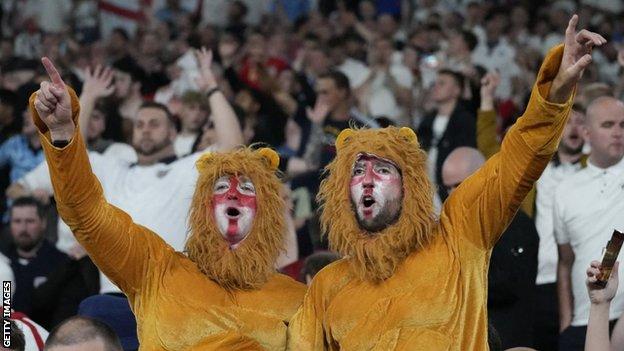 Fans dressed up as lions to cheer England on at Wembley 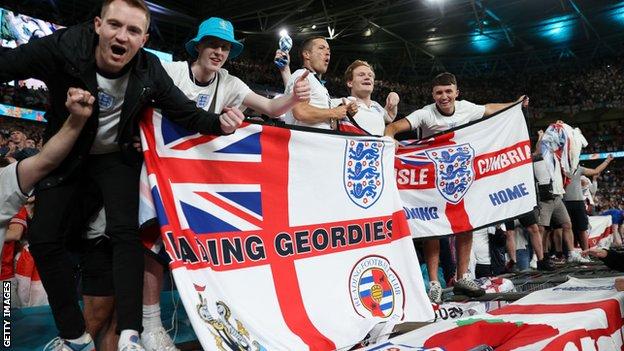