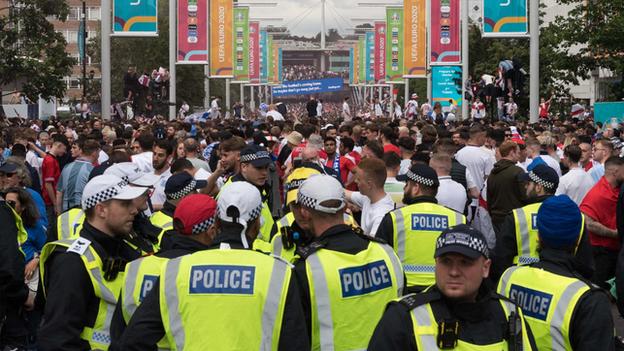 The Football Association says it is determined to ensure the "disgraceful scenes" that marred the Euro 2020 final are "never able to be repeated".

An independent review investigating the security breaches is to take place, the FA announced on Monday.

Fans fought with stewards and police as they attempted to break through gates at Wembley on 11 July.

"We are determined to fully understand what happened outside and then inside Wembley Stadium," read an FA statement.external-link

The FA has been hit with four charges by Uefa surrounding the behaviour of fans.

They relate to disturbances caused during the national anthems, invasion of the pitch, the throwing of objects and the lighting of a firework by fans.

In addition, a Uefa ethics and disciplinary inspector has been appointed to conduct a disciplinary investigation into events involving supporters that occurred inside and around the stadium.

The FA announced last week it would conduct a full review after a "large number of drunken yobs" tried to force their way in to Wembley without tickets.

The FA's statement on Monday said Baroness Casey of Blackstock has been commissioned to report on the facts and circumstances involved.

It added: "We continue to work with the relevant authorities in support of their efforts to identify those responsible and hold them to account."

Football Association chief executive Mark Bullingham apologised to legitimate fans and said the security team had "never seen anything like it".

He said the FA would work with the police to ban anyone who had forced their way in and to prevent such an event happening again.

Images of seven men being sought in connection with the disorder have been released by police.

England lost to Italy in the final following a penalty shootout after the match ended 1-1 after extra time.