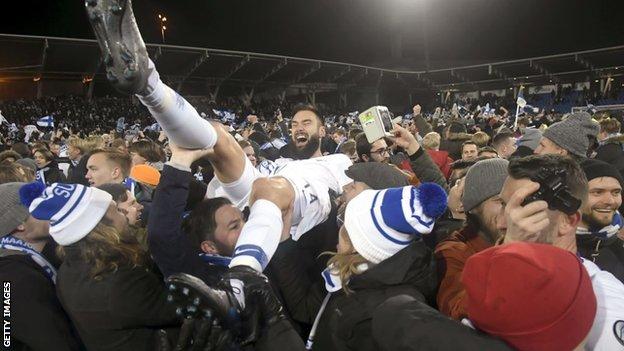 It was a party that was decades in the making.

As the final few minutes ticked down in Finland's game against Lichtenstein in November 2019, celebrations were already in full swing.

The Finns were coasting to a 3-0 victory but the most important thing about the scoreline was that, finally, there would no late drama, no last-minute goals that would break a nation's heart once again.

This was the result that would secure them a place at Euro 2020 and with it a historic first appearance at a major men's tournament.

The modest 10,766 Sonera Stadium in Helsinki was at capacity for the game but there were thousands more gathered in the centre of Finland's capital city and when the final whistle was blown, it sparked celebrations never before seen in the Nordic country.

But to understand just how significant a moment this was for all associated with Finnish football, you have to go back to one of their darkest sporting moments, one so heartbreaking that some of those involved in it chose to block it out of their memories for decades.

Ask any Finland football fan old enough to remember the above date and they will most likely grimace before they answer.

This was the date Finland faced Hungary in the final round of qualifying for the 1998 World Cup. A win would send the Finns into a two-legged play off and all was going well as they led 1-0 deep into stoppage time.

With seconds remaining, Hungary won a corner. The ball was sent into the box, prompting a mad scramble. The final five touches of the ball were by Finland players – a panicked clearance was hit towards goal, the ball was cleared off the line but struck the back of goalkeeper Teuvo Moilanen and deflected into the back of the net.external-link 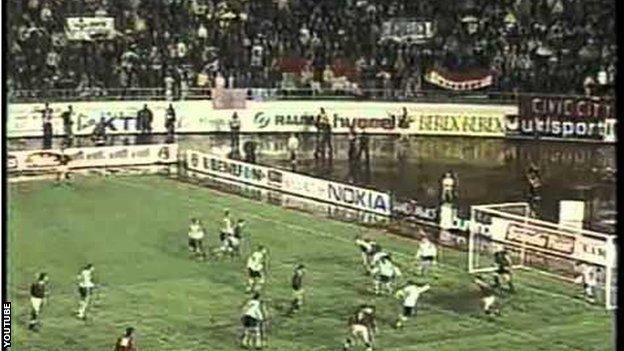 It was the last kick of the game. The final whistle blew, the game ended 1-1 and Finland's qualifying hopes were over. The stadium fell into an eerie silence as the players trudged off the pitch, stunned by what had just transpired.

"With minutes to go I was top of my world," former Finland international Juha Reini, who played in that game, told BBC Sport.

"I was 22, playing my first games in the national team, and I felt this is what football was. You don't lose, you just go on to win things and play at major tournaments.

"When that broke down there is a black moment in my mind, from the goal until maybe two or three years ago.

"I was shown a photograph recently of myself and Jari Litmanen walking off the pitch, and I just couldn't remember it."

Supporter Tero Vaatainen was in the stands for that game.

"I can still remember the stadium atmosphere," he said. "Everyone was cheering and then suddenly the goal went in and it became a deathly silence. It was so strange. It was like I had been teleported to some sort of empty space."

There was hope, however, that memories of that dark day would be banished quickly.

During the 2000s Finland had arguably their most talented crop of players, many of whom were playing at the highest level in Europe – Litmanen, Sami Hyypia, Jussi Jaaskelainen, Antti Niemi and Mikael Forssell, among others.

It was billed as the "golden generation" of Finnish football and one that many in the country believed would see them finally qualify for a major tournament.

But once again it was not to be. 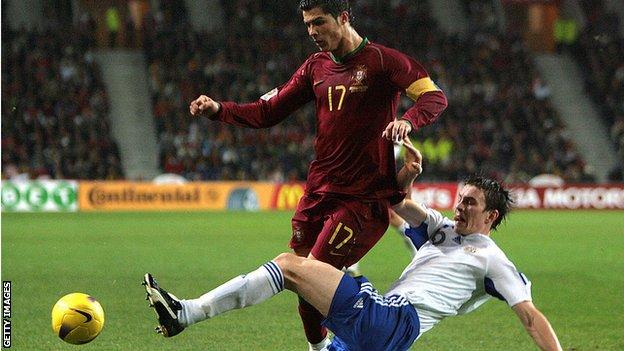 Cristiano Ronaldo was kept quiet by Finland in the 2007 qualifier, but the Finns failed to get the win they needed

The closest they came was in 2007. Led by Roy Hodgson, the Finns performed well in qualifying for Euro 2008, getting to the point where they needed to win their last qualifier to finally secure their place at a major tournament.

The one problem, though, was that game was against Portugal. Finland did a commendable job in nullifying the threat of Nuno Gomes and Cristiano Ronaldo but unfortunately never looked like scoring themselves. The game finished goalless and once again it was not enough.

But despite falling just short again the seeds were being sown that would ultimately bare fruit just over a decade later.

The teacher and a tournament taster 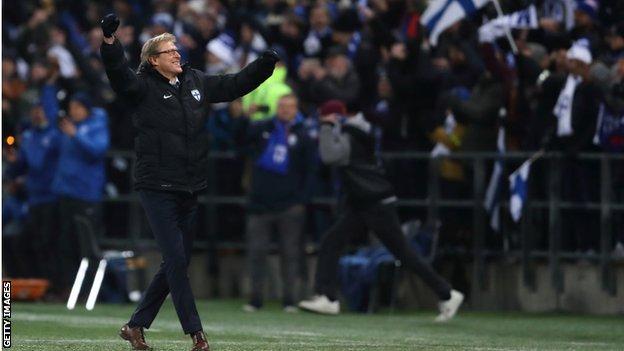 While Finland's senior players were licking their wounds after another international disappointment, impressive things were happening at youth level.

The national team's under-21s were catching the eye in qualification for Euro 2009, winning all four of their games in 2007, and another two wins the following year saw them make history as Finland reached a European Under-21 Championship for the first time in their history.

The coach of that team was Markku Kanerva, the person who would go on to replicate that feat with the senior team two years ago.

A former defender who spent most of his career with Helsinki and was capped 59 times by Finland, Kanerva certainly had the credentials to warrant respect as a coach, but it was also what he did off the pitch that helped shape him.

Kanerva combined his playing career with a job as a teacher, specialising in maths and PE, and the educator side of his personality has been a key factor in his success as a football coach.

"When I did my Uefa B coaching course he was my coach," Reini said. "I tend to be a little crazy and always saying things and he was just like a teacher, saying: 'Juha! Silent, please.'

"With the national team, even a player like [Norwich City striker] Teemu Pukki listens like a schoolboy when he speaks. I think that is great."

Grounded characters and growing together 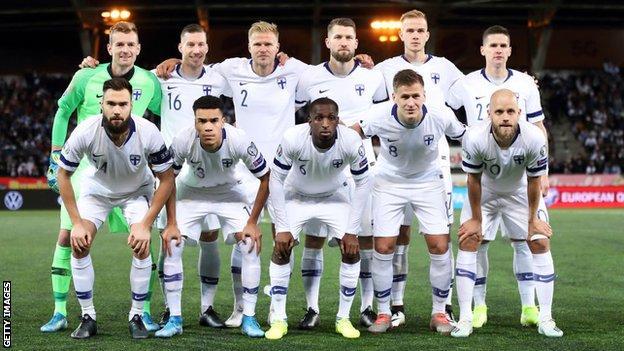 Finland's squad is made up of a sprinkling of players who compete in the top leagues in Europe, as well as some home-based players

Continuity has also been key for Finland.

Captain of Kanerva's U21 team when they reached Euro 2009 was Tim Sparv, the former Southampton midfielder who is now captain of the senior team.

In addition to Sparv, several other players from that U21 squad are also part of the senior side now.

Unlike the golden generation of players, most of the current squad are not household names. Norwich's Pukki is arguably the most well known, while Bayer Leverkusen goalkeeper Lukas Hradecky and Sparv have experience of playing in top European leagues.

But rather than a lack of big-name stars being a hinderance, instead it may have been a factor in Finland's recent success.

"I spoke with Kanerva and his assistant recently and they both said the team spirit is unique for a national team," Reini added.

"They play like a club team. Everyone knows what is expected of them and because of that they are like a well-oiled machine, certainly when it comes to defensive work."

It is perhaps only natural that Finland will draw inspiration from Iceland's achievements at Euro 2016.

It was Iceland's first appearance at a European Championship and they caught the eye with their iconic "Viking clap" chant, as well as upsetting the odds to reach the quarter-finals, beating England along the way.

Finland have been drawn in a tough Group B at Euro 2020, alongside world number one side Belgium, plus Russia and Denmark.

They do, however, have the prolific Pukki in their ranks. He scored 10 of Finland's 16 goals during qualifying and finished last season with 26 league goals in the Championship for champions Norwich.

They have also shown they are capable of pulling off shock results – beating reigning world champions France 2-0 in a friendly in November last year.

"Of course Iceland has inspired us," said Kanerva.

"It shows that even for so-called smaller countries, if they are doing the right things and believe, their dreams can come true."