When Christian Eriksen collapsed on the pitch on Saturday, the football part of Euro 2020 seemed suddenly irrelevant.

But after the news that the Denmark midfielder was awake and stable in hospital, Sunday's games all went ahead as scheduled and a weekend that will always be remembered for the events in Copenhagen ended with a classic match in Amsterdam.

Perhaps the Netherlands' thrilling 3-2 win over Ukraine was exactly what the tournament needed; something to celebrate and enjoy after a harrowing 36 hours for European football.

It was fitting, too, that the Dutch victory should be played out at the Johan Cruyff Arena, the stadium where Eriksen made his name while playing more than 100 times for Ajax between 2010 and 2013, before earning a move to Tottenham Hotspur.

The Group C match was a reminder of everything that is great about football – and at the full-time whistle there was plenty of optimism about the Netherlands' prospects over the coming weeks. 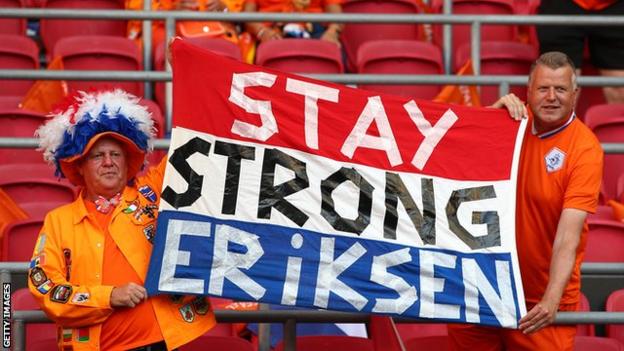 Supporters in the ground displayed banners with messages of support for Eriksen, with one reading 'Stay strong Eriksen' in EnglishThe heroes who helped save Denmark's star playerRedemption for De Boer and Netherlands?Meteoric rise of Ukraine captain ZinchenkoHow can I watch Monday's Euro 2020 matches?Listen: Daily Euros podcast

'I didn't want to speak about football'

Netherlands coach Frank de Boer coached Eriksen at Ajax earlier in the midfielder's career and said he had experienced a "rollercoaster of emotions" after hearing about the player's collapse.

Speaking after his side's dramatic win over Ukraine, De Boer added: "I worked for five years with Christian and there are players in my team who still play with him or had a good bond with him when he played for Ajax.

"It was a rollercoaster night [on Saturday]. We had planned to have a tactical meeting but we had to reschedule it for this morning because I didn't want to speak about football."

During the game, defender Daley Blind was in tears as he was substituted in the second half.

Blind starred in the same Ajax team as Eriksen and in December 2019 had heart surgery of his own after being diagnosed with myocarditis, an inflammation of the heart muscle.

"Daley was quite emotional because he had some problems with his own heart," added De Boer.

"Even now Christian is one of his best friends and it is normal that there were lots of emotions, so it was definitely not easy for us."

Nine shots in 10 minutes – tone set for a classic

There was a party atmosphere inside the Amsterdam Arena – scene of one of the greatest nights of Eriksen's career in 2019 – when Wout Weghorst made it 2-0 in the 58th minute soon after Georginio Wijnaldum's opening goal.

The Netherlands were well on their way to three points in their first match back on the major tournament stage for seven years.

But the 16,000 crowd was silenced when Ukraine struck twice in four minutes, including a screamer from Andriy Yarmolenko, before Denzel Dumfries provided a late twist with a well-placed header.

On an extraordinary night, all five goals were scored in the second half – the first time that has happened in the European Championship when a game has been goalless at half-time.

There were nine shots in the opening 10 minutes of the match – the most recorded at that stage of a game since 1980 (the earliest point Opta have this data for).

Victory was achieved without captain Virgil van Dijk, who is continuing his recovery from a serious knee ligament injury which ruled him out of most of Liverpool's 2020-21 season.

"But you have to remember in tournaments you need passion and a little bit of luck to achieve things."

Former Netherlands and Manchester City midfielder Nigel de Jong said he could visualise a negative reaction towards De Boer when Roman Yaremchuk made it 2-2.

"I could already see the headlines," he added. "It was an emotional rollercoaster. I've got no voice."

Some supporters were so worried that De Boer had ditched the traditional Dutch formation that they flew a banner behind a plane at team training on Saturday that read: "Frank, just 4-3-3".

"I am relieved," admitted Wijnaldum, who has signed for Paris St-Germain after leaving Liverpool.

The Netherlands skipper said there were lessons to be learned if the team was to advance deep into the tournament.

"We let them get back into the game and that needs to improve," he added.

De Boer said his players could be proud of their performance.

"We saw a good Dutch squad, which was compact, which dominated and created chances," he added. "That is what we want to see. But those two goals we don't want to see anymore, that was too easy."

Ukraine coach Andriy Shevchenko could not hide his disappointment after seeing his side throw away a point, but he added: "It is always upsetting to lose games like this at the end but it is not a tragedy."