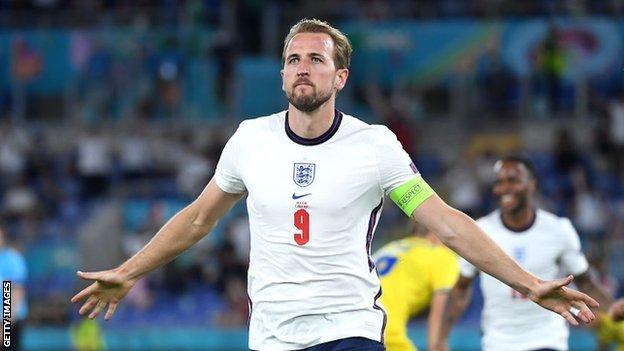 England will face Denmark in their Euro 2020 semi-final at Wembley on Wednesday (kick-off 20:00 BST) in the hope of reaching their first major final since the 1966 World Cup.

Hareide believes Kane could be the difference between the two sides.

"Harry Kane is like Cristiano Ronaldo," he said. "Give him a chance and he scores, that's why he is so dangerous."

Hareide led the Danes through qualification for Euro 2020 but his contract expired and Kasper Hjulmand took over before the tournament began, pushed back a year by the pandemic.

Kane failed to score in the group stage but has since scored three goals in knockout games against Germany and Ukraine.

"He drifts around and will be out of the game but suddenly one pass from either (Raheem) Sterling or (Jadon) Sancho or (Jack) Grealish, and he scores," he said.

Ronaldo, a five-time Ballon d'Or winner and joint-highest international goalscorer of all time, was knocked out of the Euros with Portugal after a 1-0 defeat to Belgium in the last 16.

Euro 2020: Denmark’s journey through the eyes of the country

After witnessing Christian Eriksen suffer a cardiac arrest in their opening match, the Danes lost their first two games but finished second in their group and wins over Wales and the Czech Republic have taken them to the semi-finals.

Hareide is confident that Denmark's team spirit and solid defence will pose a threat to England's final chances.

"Of course, England are the favourites but Denmark has the skill and the passion to go all the way," he said.

"[They] are probably among the three best centre-halves in Europe and the wingbacks are very quick and strong and also play for big clubs in Europe."

I am ready for that next opportunity, says Kane

Speaking to 5 Live, Kane said he did not listen to any criticism of his scoreless run.

"When you go three or four games without scoring, you want to score and put that to bed," he said. "At a major tournament it gets heightened even more but the fact that I have so much self-belief in myself and my team, I don't really let that stuff affect me.

"Whether I score or don't score I always feel I am ready for the next opportunity.

"We'll probably go into this game as favourites but it won't be an easy game for sure. We know what Denmark are and what they can bring."