"You have to get that so spot on, or you look idiotic."

We've seen Jorginho frequently convert with his infamous hop, skip and shoot penalty for Chelsea, but this was under the highest of pressure.

Miss and you give the opposition a reprieve. Score and you are the hero by taking your side into the final of the European Championship.

With 66,000 spectators watching on at Wembley, Jorginho kept his cool by slotting in the fifth and decisive spot-kick to put delirious Italy through and send Spain home.

"I think [Italy striker] Lorenzo Insigne said Jorginho should be considered for the Ballon d'Orexternal-link. He should after that," Chris Sutton said on BBC Radio 5 Live.

"How do you do that when there's so much pressure? He watches the goalkeeper Unai Simon to see where he's going to move and you have to have so much courage and conviction to take a penalty like that – and he pulled it off.

"You have to get that so spot on, or you look idiotic. But to back yourself in that moment… that tells you everything you need to know about Jorginho and his confidence."

'We fought until the end'

Federico Chiesa opened the scoring for Italy and Alvaro Morata equalised 10 minutes from time to take the game into extra time, but the sides could not be separated so it went to a penalty shootout.

It did not start well for Italy as Manuel Locatelli saw his effort saved by Simon, but Spain's Dani Olmo blazed over and Morata saw his effort kept out by Gianluigi Donnarumma. 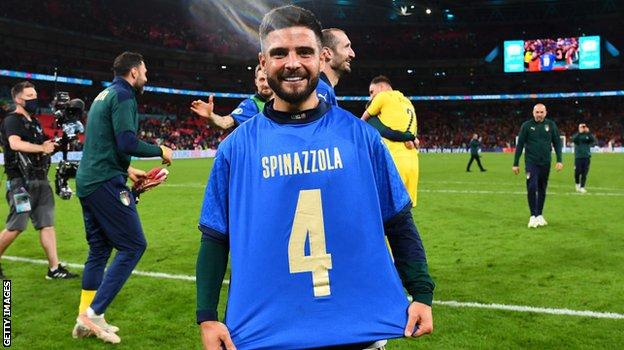 Italy forward Lorenzo Insigne dedicated the win to full-back Leonardo Spinazzola, who is out for several months after rupturing an Achilles tendon in the quarter-final.

Dion Dublin said on BBC Radio 5 Live: "Amazing scenes from the Italian bench absolutely mobbing Jorginho. What a penalty to close the semi-final out.

"The keeper has to move, no chance for the keeper, the coolest penalty of the night and the Italians go absolutely crazy on the pitch and in the stands."

Chiesa added: "When Locatelli missed the first penalty, everyone was calm, saying we can do it, and at the end our group helped us in the moment.

"Spain were great, they have star players, but we fought until the end and we did it."

'We are ready for anyone'

Italy reached their fourth Euros final, their sole triumph coming in 1968, and are now on an incredible run of 33 unbeaten games.

Roberto Mancini's side will face the winner of England or Denmark in Sunday's final at Wembley.

"We believe in ourselves from the first time we were together almost three years ago," said midfielder Jorginho.

"We were waiting for this big moment, this big challenge and now we are here and we will see what is going to happen.

"This group, with this support, we are ready for any game against anyone."

Mancini added: "I have to thank the players because they believed right from day one that we could do something incredible.

"We haven't yet done everything we need to though, there is still one step to go."