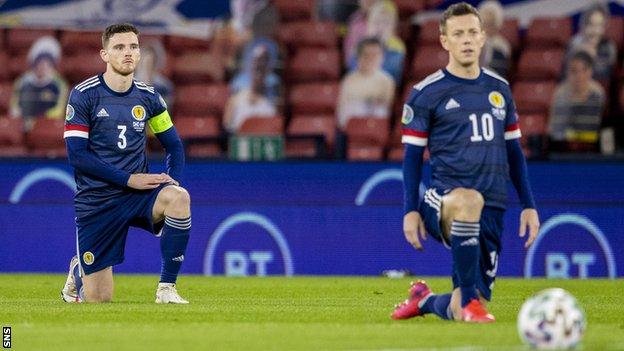 Scotland will join England in taking a knee when the teams meet at Wembley but will stand against racism in their home group matches at Euro 2020.

Steve Clarke's side host the Czech Republic on Monday before visiting England next Friday.

Croatia come to Hampden for their final Group D match on 22 June.

"Our position was – and remains – that the focus must be on meaningful change to fight discrimination in football and wider society," said Clarke.

Gordon cherishing major finals chanceWhat is taking a knee and why is it an issue at Euro 2020?

"I am aware that some individuals and groups have sought to politicise or misrepresent the Scotland national team position on taking a stand against racism and all forms of discriminatory behaviour in our Uefa Euro 2020 matches and, in particular, for our visit to Wembley.

"For the avoidance of doubt: me, my coaching staff, my players and my backroom team take a stand against racism and all forms of unacceptable and discriminatory behaviour across society.

"We do so to raise awareness of the ongoing problem but also as a reminder to those who have the ultimate power and responsibility to implement meaningful change.

"We will continue to take a stand – together, as one – for our matches at Hampden Park. For our match at Wembley, we will stand against racism and kneel against ignorance."

England will take a knee before all of their matches, the gesture that was largely used before domestic matches north and south of the border last season.

However, some players and teams have changed to taking a stand.

And Scotland captain Andy Robertson, who plays his club football at Liverpool, commented: "Our stance is that everyone, players, fans, teams, clubs, federations, governing bodies and governments must do more. Meaningful action is needed if meaningful change is to occur.

"But it is also clear, given the events around the England national team, taking the knee in this tournament matters as a symbol of solidarity."

Downing Street said on Friday fans should not boo players who take the knee following some supporters jeering England players who made the gesture in two recent warm-up matches.