Euro 2020 gets under way on Friday – and what was already going to be a unique tournament will be notable for several other reasons too.

The competition keeps its name even though it was delayed for a year because of the Covid-19 pandemic. It will now run from 11 June to 11 July 2021 across 11 countries, separated by 4,766km.

It is a first major tournament for Scotland since 1998, while England could have home advantage in nearly every game and Wales are at their second Euros in a row.

England and Scotland, who are in the same group, are two of the host countries in the first European Championship to be held across the continent.

They will be the first major tournament games held in the UK since Euro 1996.

With Wembley hosting group games, a last-16 tie, both semi-finals and the final, England would only have to play one match abroad if they win their group and go all the way.

Wales are also among the 24 teams, although they do not host any games.

When and where are the games – and how can you watch them? 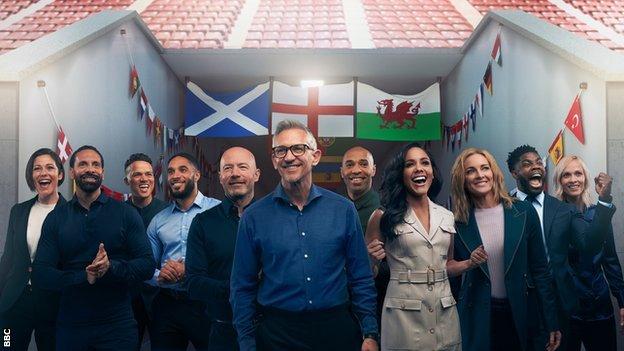 Gary Lineker, Gabby Logan, Eilidh Barbour and Mark Chapman will lead coverage across TV and radio and will be joined by a host of former England, Scotland and Wales stars

The tournament kicks off with Italy v Turkey in Rome on Friday, 11 June (20:00 BST) and concludes with the final at Wembley in London on Sunday, 11 July.

England's three group games will be at Wembley with Scotland playing their other two matches at Hampden Park. Wales play theirs in Baku in Azerbaijan and Rome in Italy.

The tournament opener and England, Scotland and Wales' opening games are exclusively live on the BBC, and all 51 matches in the tournament are available on Radio 5 Live.

All games are live on free-to-air TV in the UK, either on the BBC or ITV.

Will there be crowds?

Hampden does Euros – inside the national stadium

There should be fans at all 51 games.

Dublin's games were moved to St Petersburg and London, cities already hosting games, and Bilbao's matches were switched to Seville – because neither city would guarantee allowing fans into their stadiums.

The biggest crowds could be at the 68,000-seater Puskas Arena in Budapest – which is planning to be at 100% capacity.

Wembley, which is hosting both semi-finals and finals, could host more fans as the tournament goes on. A full house of 90,000 has not yet been ruled out for the final if Covid restrictions are lifted on 21 June.

Elsewhere, St Petersburg and Baku will have capacities of 50%, with the other cities – Amsterdam, Bucharest, Copenhagen, Munich, Rome and Seville – somewhere between 22% and 45%.

The decision on how many fans could attend was made by the individual regions/countries and not Uefa.

There is no block exemption to international travel or quarantine rules for match-ticket holders (although some countries are making exceptions), meaning supporters must obey the existing rules.

Do fans need to be tested? 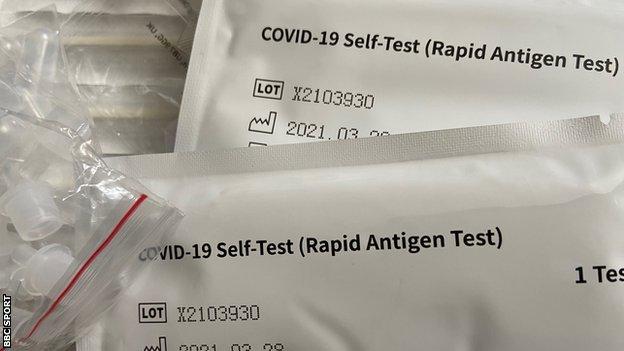 Thousands of fans – who bought and paid for tickets in 2019 – have had their tickets cancelled and refunded as a result of the smaller capacities.

But supporters lucky enough to keep their tickets will have a few hurdles to clear before being allowed to attend games.

Each city has its own rules – but fans need to wear a face mask at every game (unless they have a doctor's certificate).

There will be sanitiser stations throughout stadiums and fans are asked to stay in their seats as much as possible and avoid close contact with other fans.

Glasgow, Munich and Baku are yet to confirm any need for testing to enter the stadium – although that could yet change.

In London, Bucharest, Budapest, Copenhagen and Rome, proof of vaccination or a negative test will suffice.

The Wembley rules are just for the group stages at the moment.

Fans need a negative test to get in to games in Amsterdam and Seville. St Petersburg plans to do temperature checks.

What other changes has Covid caused? 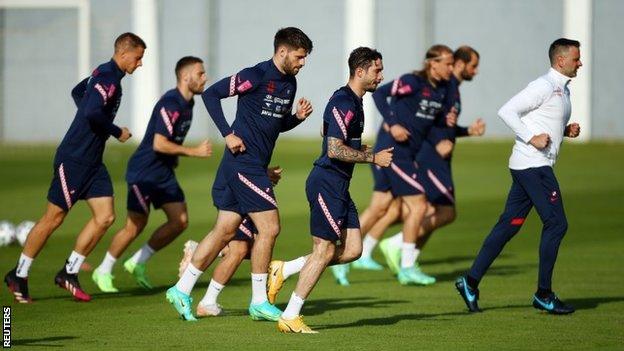 Croatia and the Czech Republic are the other two teams in England and Scotland's group. They were both meant to have their bases in Scotland – but have now moved back to their home countries and will just fly to each game.

Scottish rules meant the whole squad would have to quarantine if there was a Covid case in the team.

Teams will be allowed to select a 26-player squad instead of the usual 23 to lessen the load on players after a compressed club season – and give managers more options in case of Covid outbreaks.

A rule allowing each team to make up to five substitutes per game had already been confirmed.

Squads will be in bubbles and tested before each game. There has been no mandatory vaccination of players.

How can fans in the UK who don't have tickets watch?

Football fans can watch the Euro 2020 games in pubs across the UK, although the amount varies from nation to nation.

More people are allowed to meet in beer gardens in England, Wales and Scotland.

You are allowed to watch a game at a friend's house – but the number is capped at different levels across the UK.

The official Uefa fan zone in England is at Trafalgar Square in London. Entry is free, with tickets allocated via ballot. It will screen all England games plus the semis and final.

Scotland's fan zone is at Glasgow Green. Manchester, Birmingham and other cities also have special areas.

What other controversies have surrounded the Euros?

From Seville in the west of the continent to Baku 4,766km away in the east, significant amounts of air travel will be involved at Euro 2020 – both for players and the thousands of fans wanting to watch their team.

Covid restrictions mean the volume of air traffic will be far lower than one initial estimate of an extra two million plane trips during the tournament, but it will still be significant.

Switzerland fans could have to travel over 20,000km – with three trips to Baku and back to central or western Europe in between.

Andrew Simms, Rapid Transition Alliance co-ordinator and co-director of New Weather Institute, said: "It's almost like going out and saying: How can we design a competition to maximise our environmental impact?"

Read more about the climate impact of Euro 2020.

There are also doubts about the merits of encouraging fans from 24 nations to potentially visit up to five different countries in the space of a month during a pandemic.

Who are the favourites?

Why not? We could win it – England players look ahead to Euro 2020

Entertainment data analysts Gracenote have predicted England as the second most likely winners – behind Belgium by less than 1% – because of their practical home advantage.

However, The Analystexternal-link – powered by Opta data – only puts Gareth Southgate's England ninth on their list of likely winners.

France are considered by many as the favourites. The world champions (and Euro 2016 finalists) have a hugely impressive starting XI and squad depth and are boosted by the return of prolific Real Madrid striker Karim Benzema from a long international exile.

They are in a tough group with defending champions Portugal and 2014 World Cup winners Germany. All three sides could qualify for the last 16 though.

This could be one of the last chances for Belgium's golden generation to win a major tournament. They top the Fifa world rankings.

What are the home nations' chances?

As already discussed England are likely to be one of the favourites, with potentially six of seven games at Wembley. If they win their group their only game abroad – if they go all the way – would be a quarter-final in Rome.

The last-16 tie for the winners of their group should have been in Dublin, but was moved to Wembley when Ireland could not guarantee allowing fans to games.

Scotland are at their first major tournament since the 1998 World Cup. The Analyst gives them a 0.1% of winning Euro 2020 (only above Slovakia and North Macedonia).

"It's not just a case of turning up and it's party time," said Scotland's Manchester United midfielder Scott McTominay.

"We want to play well and that's the sole ambition the manager's told us. We want to get results, it's not a case of being easy-ozy and it's our first tournament for 23 years."

Wales are at their second consecutive European Championship, having never qualified for one before that.

They were the surprise package at Euro 2016 under Chris Coleman – with Gareth Bale in inspirational form – beating Belgium on their way to the semi-finals.

Rob Page is in charge now, with boss Ryan Giggs not taking charge because of legal issues, but few people expect Wales to have a similar run.

Gracenote give them a 54% chance of getting out of a group which features Italy, Switzerland and Turkey.

Ashley Williams, who was Wales captain in 2016 and is now a BBC pundit, said: "Looking back at what we did is no way to view this tournament, because that was a one-off and has no bearing on what will happen this time.

"They don't have to reach the semi-finals again for it to rank as an achievement."