England manager Gareth Southgate says failing to reach the semi-finals at Euro 2020 will be classed as a failure.

The Three Lions reached the last four of the 2018 World Cup and a run to the final would see them play all but one of their games at Wembley.

Asked if anything less than reaching the semi-finals would be deemed a failure, Southgate replied: "Yeah, it probably will.

"I think we're realistic about that, we have to live with that expectation."

And he added: "Are we ready to win? Well, we've been to two semi-finals so the next step is to try to go further."

Former Middlesbrough manager Southgate was appointed in September 2016 and oversaw the side's best finish at a major tournament since 1990 as they reached the semi-finals in Russia in 2018.

They also reached the same stage of the Nations League a year later.

"We know the excitement around the team and it's great, we're now relevant," added Southgate.

England come up against World Cup finalists Croatia in their opening game, followed by a huge match against neighbours Scotland on 18 June, rounding off Group D against the Czech Republic on 22 June.

'Right-backs are in the best 26 footballers'

Southgate said if he could have picked five or six right-backs for England's campaign he "would have done" after naming four right-backs in his 26-man squad.

Southgate said: "We have four players that play sometimes at right-back for their clubs.

"We are here to play nine games. We already have some injury doubts in the group. We need adaptability, good players, good professionals, tactically savvy players and we are fortunate we have old and young players who fit all those categories."

Injured Maguire and Henderson 'have a bit to do'

Southgate was able to name 26 players in his squad to help with the workload on players following the coronavirus pandemic, three more than at previous tournaments.

Liverpool skipper Jordan Henderson also makes the cut, even though the midfielder has been out of action since February with a groin injury.

"We know exactly where he is at," Southgate said regarding Maguire's availability. "Our medical team have been with him in Manchester and he hasn't travelled to join up with us.

"Maguire and Henderson both have a bit to do to be available but the possibility is that they can play a part and the fact is that they are such fantastic characters to have around the group.

"Henderson, with his leadership and presence, is having an effect on other people, especially the younger ones. Given we were able to pick 26, the opportunity to have those two with us was a straightforward one." 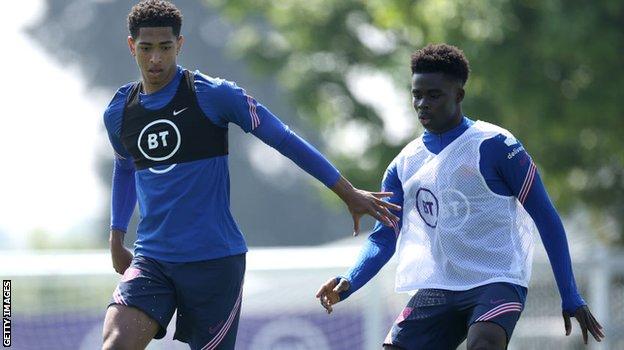 With an average age of 25 years and three months, England will go into the tournament with one of the youngest squads.

Borussia Dortmund's 17-year-old midfielder Jude Bellingham is one of those included and will be the second-youngest England player to go to a major tournament after Theo Walcott in 2006.

Bellingham, who won the German Cup with Dortmund this season, is in line to win his third cap.

"He is phenomenal," Southgate said of Bellingham. "Just in training in the last couple of days, to have a 17-year-old who wants to compete with senior players, not only has the techniques but the competitiveness and maturity, he is a hugely exciting player.

"He will be an important player for England, we are not just taking him for the experience, that will be enormous for him and future England managers because I don't see with him anything in his character that means he won't succeed."