Euro 2020 has been unfair for fans and a challenge for teams because of the vast difference in distances they have had to travel during the tournament, says Uefa president Aleksander Ceferin.

England play Italy in Sunday's final at Wembley after a championship that has been played in cities in 11 countries.

"I would not support it anymore," Ceferin told BBC Sport.

Speaking to BBC sports editor Dan Roan on a special Euro 2020 episode of The Sports Desk podcast, Ceferin conceded the format had been "too challenging".

He added: "In a way, it is not correct that some teams have to travel more than 10,000km while others have to only travel 1,000km.

"It is not fair to fans, who had to be in Rome one day and in Baku over the next few, which is a four and a half hour flight.

"We had to travel a lot, into countries with different jurisdictions, different currencies, countries in the European Union (EU) and Non-EU, so it was not easy.

"It was a format that was decided before I came [into post] and I respect it. It is an interesting idea but it is hard to implement and I don't think we will do it again."

Belgium, knocked out in the quarter-finals, travelled the second furthest at 10, 245km.

The format was called a "joke" by Wales captain Chris Gunter after his side were beaten in the last-16 by Denmark in Amsterdam, having travelled a total of 9,156km. They played their first two group games in Baku, Azerbaijan, before heading to Rome for their final group game.

Finalists England and Italy both played their three group games at home in London and Rome.

England, who also played their last-16 and semi-final games at Wembley have only travelled 3,874km in the tournament, for their quarter-final against Ukraine in Rome.

Italy, who played their last-16 game at Wembley before going to Munich for their quarter-final win over Belgium, and returning to London for the semi-final and final, have travelled 4,714km.

However, Ceferin also said Euro 2020, the first under his tenure, was the "most interesting" European Championship.

The tournament had been delayed by a year because of the Covid-19 pandemic and Ceferin said thorough testing at all venues has prevented any significant outbreak between any of the players.

"It has been a special Euros, for sure," the 53-year-old Slovenian added. "I will remember it as the beginning of normality and the return of fans.

"I have never seen a dramatic Euros like this one, with great matches and surprising results.

"Our health protocols are extremely tough, and everyone is tested, even those who have been vaccinated. I was tested 76 times.

"The teams are highly professional and they all respect the bubble system. Also, in the stadiums, we are very strict and when I see politicians saying people were infected at the matches, without any proof, it disappoints me a bit.

"There were also 20,000 who came to London without tickets. You are not tested in the park, but to accuse all football of spreading the virus is irresponsible in my opinion."

'I was touched by the reaction' 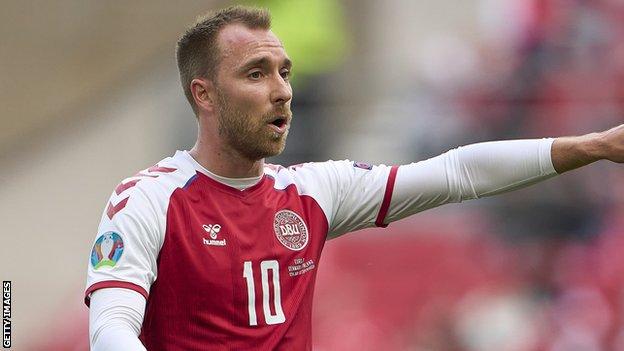 Euro 2020 will also be remembered for Denmark midfielder Christian Eriksen, who suffered a cardiac arrest when he collapsed in his country's opening group match against Finland in Copenhagen.

Ceferin says he was in St Petersburg for another game during the incident, but that he was "touched" by the reaction of Eriksen's Danish team-mates and the medical staff on site.

He added: "It was a scary situation. We were all completely shocked, but in a way, it was good it happened at a high level football match because paramedics were there in 20 seconds and that saved his life, I am sure.

"Thank god everything is OK with him and it was important to show respect to him and the team of doctors, who reacted fantastically.

"I have seen the Danish players unite even more after that incident, they also reacted to the incident in a fantastic way, especially the captain [Simon Kjaer], and I have to say I was touched by their reaction."

'Our position is clear'

Uefa blocked Germany's plan to light up their stadium in rainbow colours in protest against an anti-gay law passed in Hungary before their group game.

Germany goalkeeper and captain Manuel Neuer wore a rainbow coloured armband for the match after Hungarian MPs voted last month to ban the promotion of homosexuality to under-18s. 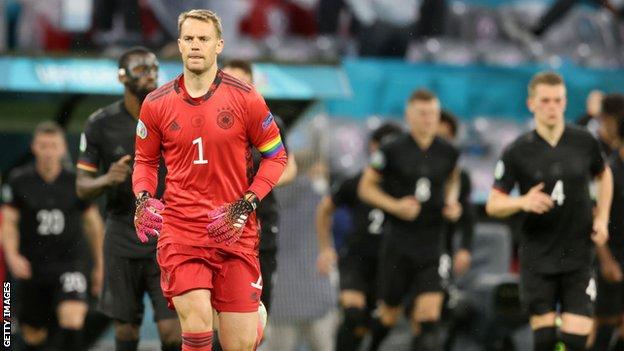 Neuer was initially set to be investigated by Uefa but it was dropped, and while Ceferin says Uefa's stance on discrimination is "clear", he says he cannot allow the organisation to be "dragged into any political fight".

"My personal opinion on human rights and diversity, and the opinion of Uefa is clear," he said.

"But our position is clear, we have shown it many times and we will show it even more in the future.

"Maybe we have to adapt as times are changing. On Neuer, I'm sure it was the right thing to stop it [the investigation] and we didn't open a disciplinary case."

Ceferin is also confident that Uefa's concussion protocols have worked following incidents in the tournament.

France defender Benjamin Pavard carried on playing against Germany at Euro 2020 despite losing consciousness briefly, while Austria's Christoph Baumgartner scored the winner against Ukraine, having been checked just three minutes earlier for a head injury following an aerial collision.

He was substituted shortly after scoring.

"Those situations were handled properly and will work in the future on improvement," said Ceferin.

He also believes that it is right that England should play Italy in the final because they are "best two teams".

"It is an interesting final," said Ceferin.

"England have played like Italy did once, and Italy have attacked heavily and been open.

"I'm looking forward to it. Many Italians live in London and it will be a great atmosphere and finish to the Euros.