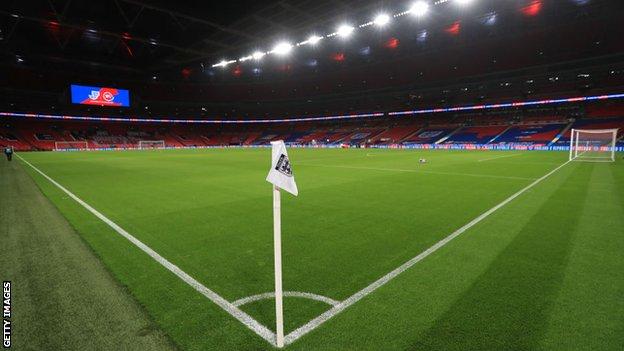 Wembley will host both semi-finals, and the final on 11 July

Wembley is set to be given an extra Euro 2020 last-16 tie – which could involve England – when Uefa addresses uncertainty around matches in Dublin, Bilbao and Munich on Friday.

Dublin is certain to lose its four games and Bilbao's could be moved to Seville because of Covid-19 issues.

A fixture clash means Dublin's group-stage games will not go to Wembley.

But BBC Sport understands its last-16 game, featuring the winner of England's group, will be moved to Wembley.

So if England win Group D, which also features Scotland, Croatia and the Czech Republic, they will play the second-placed Group F team on home soil on 29 June.

Euro 2020 – delayed by a year from its original schedule because of the pandemic – was due to be hosted by 12 different European cities.

Uefa's executive committee will discuss the matter on Friday morning. It had told host cities that stadiums must be able to hold at least 25% capacity to be allowed to keep their fixtures.

Dublin and Bilbao's matches will be moved but it is not known whether Munich will give guarantees around access for supporters in order to keep its four games – three in Group F and one quarter-final.

Stadiums in England other than Wembley are thought to have been ruled out for the group matches that were due to be played in Dublin.

Wembley was already due to host three group games as well as a last-16 tie, both semi-finals and the tournament final, but is not currently scheduled to stage any quarter-finals.