Leicester, Ulster and Montpellier join Bath in the semi-finals of this year’s competition; the Tigers beat Newcastle Falcons, while Ulster won away to Northampton Saints and Montpellier defeated Benetton 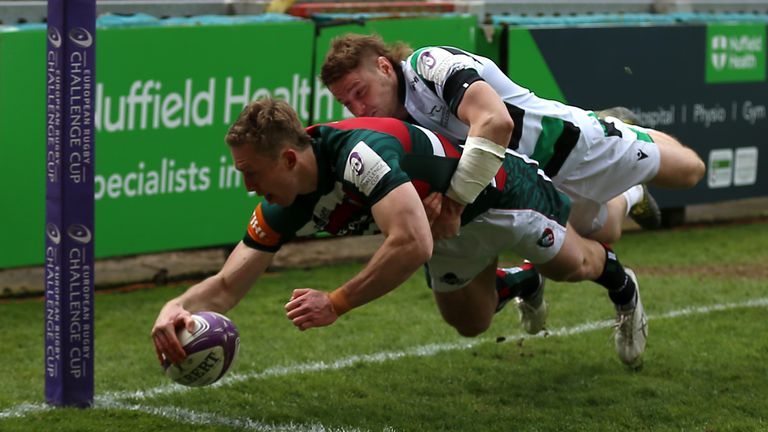 We round up all of Saturday’s Challenge Cup quarter-final action, which saw Leicester, Ulster and Montpellier emerge victorious…

Leicester advanced to the semi-finals of the European Challenge Cup with a convincing victory over Newcastle at Mattioli Woods Welford Road.

Leicester’s scrum dominance earned them frequent penalties from French referee Romain Poite, allowing them to control the match, with the spirited Falcons battling valiantly to remain in contention until the final five minutes.

That was despite Newcastle picking up four yellow cards – two of them to replacement prop Kyle Cooper, who was sent off with four minutes to go.

Johnny McPhillips and George Ford both kicked a penalty and a conversion apiece.

George Wacokecoke and Tom Penny crossed for Newcastle, with Brett Connon kicking a penalty and a conversion. Jacob Stockdale was among the try-scorers for Ulster

Northampton’s bid to reach their first European semi-final since 2014 ended in failure in a superb European Challenge Cup game at Franklin’s Gardens.

The Saints overcame the loss of three forwards to yellow cards in the first half to lead by eight points at half-time.

However, Ulster’s dominance of territory and possession eventually told as they ran out deserved winners.

There was also a penalty try award, with Cooney adding four conversions.

Benoit Paillaugue notched 23 points as Montpellier eventually overcame Italian side Benetton to book their place in the last four of the European Challenge Cup.

The scrum-half scored two tries either side of half time and kicked two conversions, along with booting three penalties.

Paul Willemse got the other try for the home side, while Anthony Bouthier landed a drop goal in the first half as well.

Italy international Paolo Garbisi scored all but three of Benetton’s points, crossing for a try five minutes into the second half which he also converted.

Garbisi landed five penalties to keep the visitors within touching distance for much of the match, while replacement Tommaso Allan added another to ensure a nervy finish to the contest.

However, Montpellier had enough to hold off the away side and secure their spot in the semi-finals.