'Are you insane?' reads the not so subtle Tuttosport headline on Monday

The news of a new European Super League has created a strong and, almost overwhelmingly angry, reaction across the continent.

BBC Sport and BBC Monitoring take a look at the media fallout across Europe.

'The bonfire of greed'

The Italian sport dailies lead the way when it comes to outrage.

"This paper has always been opposed to any project that favours the interests of the few by betraying individual merits and undermining the national tournaments which make up the social and cultural roots of football."

Tuttosport's headline is succinctexternal-link but perhaps best indicative of the mood among football fans in Italy: "Are you insane?"

And Il Fatto Quotidiano saysexternal-link "the Super League is the antithesis of football: they want to kill the passion for the game in the name of profit… and to turn fans into mere consumers".

Like several other outlets, the paper says the project is an attempt to reshape European football into an NBA-like tournament "in which every match is an event, and the sport is the means rather than the end: a huge match every night, players who are paid tens of millions per season, extortionate tickets and audiences of billions of people. It's the furthest thing from the European idea of football – and of sport." 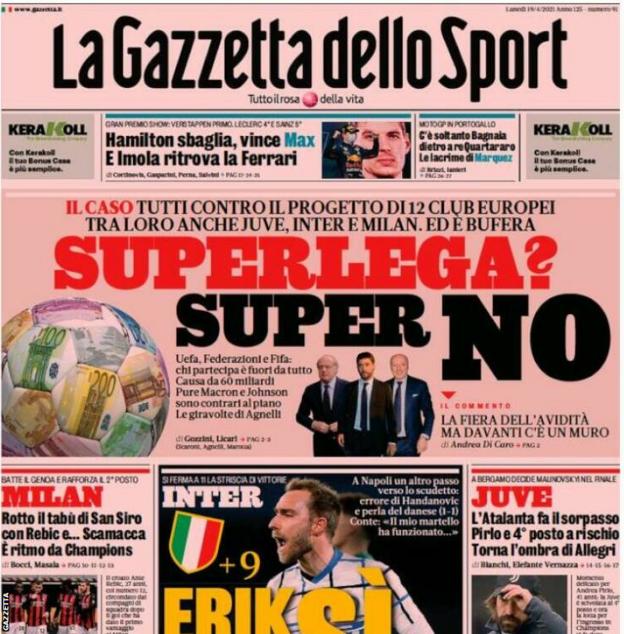 'The worst announcement in football history'

El Mundo cites its sourcesexternal-link close to the formation of the league as saying big European clubs think the formula of the Champions League "exhausted itself" and the income margins narrowed.

"This is why the entities… believe they have found a new chicken laying gold eggs. And they plan to exploit it without any intermediaries other than themselves," El Mundo said.

Former Real Madrid president Ramon Calderon, speaking to BBC Radio 5 Live, called the league "perhaps the worst announcement in football history" and added he believed it was "risky, harmful and with unprecedented consequences".

"For Perez it is third time lucky. The plan he has championed for years finally looks set to be getting off the ground… before similar plots had fallen flat following cold feet from executives," he said.

'The nightmare has come true'

"The dare of Real Madrid, Juve and others: the nightmare has come true", says France's Eurosportexternal-link in a furious comment piece that accuses the teams of "waiting until night fell to unveil their dark scheme – as if they had been too ashamed to do so in the light of day."

The article concludes darkly: "We don't yet know if the 12 teams in question will go through with their plan. But whatever happens, something's been broken. We won't ever look at them in the same way." 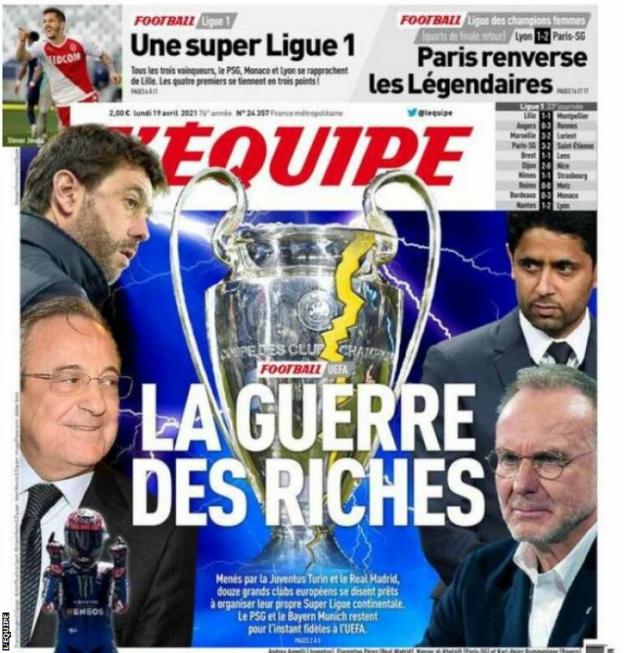 L'Equipe refers to the news as 'war'

An editorial in sports daily L'Equipeexternal-link says the Super League members are "traitors".

"If they continue with their project, we will never forgive them. We won't forgive them if they give it up, either. The 12 clubs will remain traitors of a shared ideal for a long time still… They've showed they're ready to kill off European football, its essence, its history and its beauty with their cynicism and greed."

In an opinion piece on the Spanish ABC website, journalist Salvador Sostres can see a benefit for Real Madrid and Barca.

"Barca and Madrid have to be the main allies in this strategy, the only one that will ensure the income they need to take over the great players and be able to count on the technical experts, the stadiums and the benefits they undoubtedly need to continue to be among the best," he says.

There are no Bundesliga sides signed up to the plan so in Germany, where clubs have to maintain a majority fan ownership, there is a wider swipe at the English and Spanish teams.

Der Spiegel writes:external-link "The lack of German clubs, specifically Bayern Munich and Borussia Dortmund, is due to the fact that the Super League is viewed more negatively by the public in Germany than in England, for example… Bayern Munich and Dortmund know what thin ice they would be on if they went against this consensus.

"These qualms ceased to exist at Real Madrid or Manchester United long ago,"