'It's a time of great concern' – Lineker on European Super League

The dust is barely settling on an extraordinary 24 hours for European football and already the question is being asked, what happens now?

The 12 clubs who want the European Super League are pressing ahead with their plans. Those who do not are digging in and getting ready for the fight. Passions are running high. Uefa president Aleksander Ceferin has even called Juventus' chairman "a liar" and the clubs "snakes".

Around them there are so many opinions, the vast majority unfavourable to the project.

BBC Sport has taken a step back to try and assess what the next period of time is going to look like and where the key decisions may come.

Were the 12 clubs prepared for the negative reaction?

Yes. They realised what would happen and the ferocity of it has not caught them off guard.

What they intend to do is wait for the storm to blow over and then start talking with Fifa, Uefa and other key stakeholders about their plans.

The clubs are adamant they want to work with the authorities, not against them.

What are the legal implications?

Uefa president Ceferin could not have been any clearer in his news conference on Monday. He wants the 12 clubs banned from European competition at the earliest possible opportunity and the players who play for them prevented from appearing at major tournaments.

Five ESL clubs are involved in either Champions League or Europa League semi-finals next week.

Uefa is speaking with lawyers regarding these matches. It is difficult to see the clubs being kicked out at this stage but Ceferin did not deny it could happen when pressed on the subject.

What has Fifa had to say?

There is wariness in the approach being taken by Fifa president Gianni Infantino, who has been looking to launch an expanded Club World Cup that would involve many of the teams who are part of the breakaway.

A statement released by the world governing body late on Sunday, which said Fifa "disapproved" of the Super League plans, was felt to be a weak response by those who believe they have been betrayed by the bigger clubs.

A desire for Infantino to speak publicly about the situation should be met at the Uefa Congress on Tuesday.

It has been acknowledged that unless Infantino adopts a stance in line with Ceferin, the task of halting the Super League will become very hard.

Is this the end for the Champions League?

One of the few things the 12 clubs and Uefa are agreed upon is that the Champions League can exist regardless of the actions of those who do not want to play in it.

Clearly, they reached this conclusion from very different standpoints.

The clubs say there is no reason why the Champions League cannot exist alongside their own competition, potentially providing some element of qualification for the additional five slots.

Uefa chiefs do not see the situation in anything like the same terms. As far as they are concerned, the Champions League is the number one club competition and will remain so.

But Uefa has just announced a new Champions League?

This goes to the very heart of the issue.

After almost two years of negotiation, Uefa, with support from the European Club Association (ECA), has finally announced a revamped Champions League from 2024.

This includes a couple of controversial measures introduced as a direct result of lobbying from the big clubs.

Younger fans happier about prospect of breakaway league – December 2020 pollSuper League: Why are football's biggest clubs starting a new tournament?Tell us your thoughts on the proposals. Email haveyoursay@bbc.co.uk

First, instead of groups involving four teams playing each other twice, the first phase will be in a league format.

Each of the 36 clubs will play 10 matches against clubs of varying strengths. This delivers more matches and, in theory, a greater number of attractive games.

In addition, two of the additional four places will go to the teams with the highest Uefa co-efficient who qualified for European competition, but not the Champions League.

If the concept was in place this season, Chelsea, Liverpool and Borussia Dortmund would be the most likely beneficiaries. But the clubs do not think the plans go far enough.

They want high-profile games every time they play. If they get that, it will generate increased revenues which will benefit them and, they say, the rest of European football.

Which other three teams will be invited?

The statement released on Sunday by the 12 clubs included contact numbers for public relations agencies in Germany and France, which gives credence to the view that Bayern Munich, Borussia Dortmund and Paris St-Germain will end up being the other three teams, on the basis that they cannot afford to be on the outside.

PSG president Nasser Al-Khelaifi has turned down the chance to replace Andrea Agnelli as chairman of the ECA, although BBC Sport has been told this is not because of an imminent exit to ESL.

Yet it seems those three clubs were surprised by Sunday's developments, having previously turned down the opportunity to be involved. The belief is further lobbying of them will take place once tensions have eased.

What about Celtic and Rangers – and others?

The plan is for ESL to have 20 teams – but, as yet, there is no plan for how the additional five teams from the 15 founder members will be selected.

Super League sources have said this could be done through a qualification system in the Champions League, although that would require Uefa agreement.

If we are talking the best supported teams, then Schalke, West Ham, Celtic, Stuttgart and Benfica would be best placed. If it is Uefa's club ranking that was the determining factor, then Sevilla, Porto, Roma, Ajax and Shakhtar Donetsk would be the entrants.

For now, this is all conjecture. Nobody knows, not even those who want to run the tournament.

When could it start?

ESL's statement on Sunday said "as soon as practicable".

BBC Sport has been told that could be as early as next season. Evidently that is not the case, so 2022-23 is a more realistic option, although even that will be optimistic unless there is some softening of present positions.

How can the Premier League recover? Can the teams trust each other again?

You may argue trust has been broken permanently, but there are two ways of looking at the situation.

First, is there any trust in the first place? Clubs were arguing in the autumn about Project Big Picture, when the same six clubs were being accused of backroom dealing.

Yet they have carried on meeting as a Premier League all the way through the second wave of the pandemic, which at one point threatened to close the league down again.

Second, there could hardly have been anything more divisive than the Premier League breakaway in 1992. Yet the world carried on. 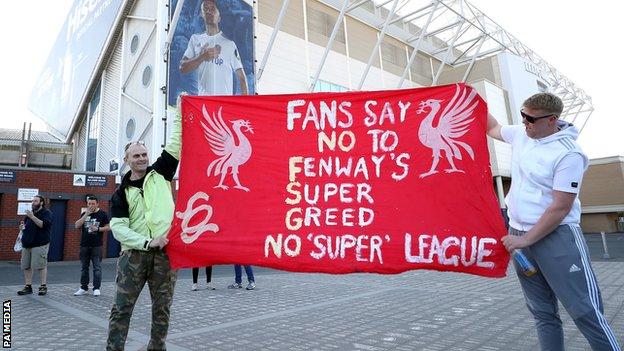 Will the Premier League be affected at all?

The six clubs have said they want to carry on playing in it. If Ceferin has his way, the clubs will be kicked out unless they withdraw their Super League proposals.

Leaving aside that particular argument, there are three areas where the impact will be dramatic:

First, there will be no battle for the top four because virtually all the clubs who are fighting to finish there would qualify anyway.

Second, the financial gap between the Super League clubs and those excluded would be so big, it would be almost impossible for those six clubs not to finish in the top six.

Third, if broadcasters are paying more for European rights, it could have a significant impact on what they will pay the Premier League.