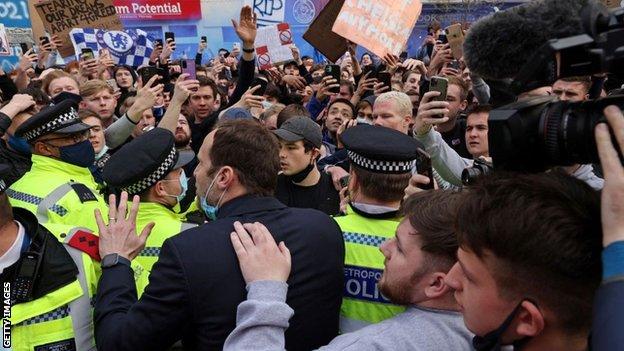 All six opted to pull out of the plans on Tuesday after a huge backlash, just 48 hours after unveiling the proposals.

Chelsea and Manchester City were the first to make their move and were quickly followed by Arsenal, Liverpool, Manchester United and Tottenham.

"The owners have to be very, very careful now," Warnock told BBC Sport.

"Expect a backlash when they come back to grounds – rightly so, because you've gone against the fans. You've thought they wanted to go a certain way without consulting them.

"It's been abysmal the way it was handled. You're seeing the power of the fans. Don't forget football players are fans too.

"They know what it feels like to be a fan and understand the connection between the players, fans, the club – so I am absolutely delighted it's fallen down and started to unravel."

The plans were met with condemnation from clubs and players as well as governing bodies, politicians and especially fans, with around 1,000 protesting outside Stamford Bridge before Chelsea's draw with Brighton – just as they had before Leeds' game with Liverpool on Monday.

Manchester United executive vice-chairman Ed Woodward also announced he will step down from his role at the end of 2021.

"The owners need to come out and do the right thing now and say 'we got this competition wrong'," added Warnock.

"'We apologise – we're begging you for forgiveness', because that's what they'll have to do. It won't surprise me if certain clubs went up for sale now because of the pressure they'll come under.

"Some US owners won't turn up to games for a very long time. They can shut off from this as much as they want. Across the Atlantic, it's not a big issue for them.

"But the day you turn up at Anfield or Manchester United or Arsenal, get ready for it because it's coming and they have every right to give you down the barrels, the fans."

'The worst PR campaign ever'

The ESL was being pushed most keenly by Real Madrid president Florentino Perez, who said the competition was needed to "save football".

"This is the idea of Florentino Perez, who convinced everyone," Spanish football journalist Guillem Balague told BBC Radio 5 Live.

"It started with Manchester United, who were very much in favour of it. He feels now, having spoken to his entourage, a little bit let down by everyone.

"He feels this emotional tsunami that was first on social media and now the streets of London, with the pressure around it, it feels this big idea will now not take place.

"I do think the push from Perez is going to be towards more changes. It is not just they badly need the money – which they do – the analysis of the situation is quite precise. It is backed by a lot of data.

"Young people are not watching 90 minutes a lot. The money coming through TV rights is diminishing and the business side of football, it has to change. It is just they went about it the wrong way. Perez forgot to talk to players, fans, other clubs, everyone. It was the worst PR campaign ever."

'I don't see how the owners can continue'

"I said last night that as soon as one goes they will all go. This is over now," Carragher said on Sky Sports.

"I am annoyed with Liverpool. Jurgen Klopp threw them under the bus, Jordan Henderson has. There's nothing left for the owners.

"I don't see how the owners can continue. I don't see a future for their ownership and I think they are making it worse the longer they hang in.

"I can't remember a time where something has united everybody in football. So many people with huge rivalries, tribalism, we argue and fight with one another. This is something that has brought everybody together and that is something we should all be proud of."

Neville added: "It's done, it's finished. They'll have PR teams and comms teams scrambling now trying to make this look as lovely as possible.

"Florentino Perez may have a £100m fine. I hope so. I hope he has them on a massive fine to withdraw the lot of them and I hope they basically end up eating each other."

Manchester City centre-back Aymeric Laporte: I, and I believe many other players, feel very happy about this outcome. Today, being able to play in the Champions League is an invaluable chance for me, and it's a magic thing I never want to go away. Winning it is probably the top priority for every player in the competition. I still believe there are plenty of things to improve and discuss, but this was definitely not the right way. This episode will be a good reminder to everyone: FOOTBALL IS FOR THE FANS.

Former Arsenal and Chelsea midfielder Cesc Fabregas: Well done football fans. This beautiful sport is nothing without you.