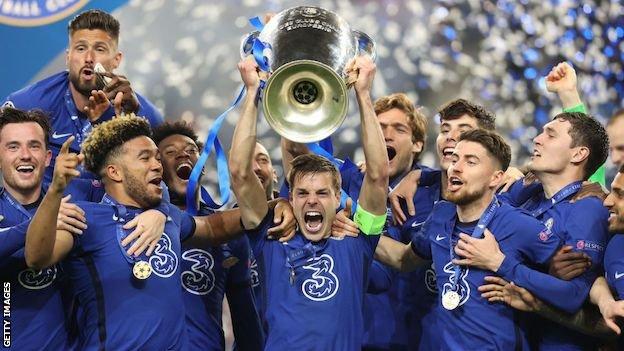 After a season in which clubs have – like the rest of the world – battled with a pandemic, and 12 of them attempted to form a breakaway league, European football has some major hurdles to overcome.

On 8 June, eyes will turn forward as the preliminary-round draw is made for the 2021-22 Champions League.

Three of the Champions League's most illustrious names – Real Madrid, Barcelona and Juventus – are facing expulsion from the competition and even those who opposed the Super League concept the trio are clinging to accept that football's future is in peril if the present structure remains.

Here, BBC Sport looks at the differing arguments and why no-one can be entirely certain what happens next.

Real, Barca and Juve out in the cold

Nine of the 12 clubs who signed up to the ill-fated Super League project have stepped back from the brink and admitted they were wrong. Real Madrid, Barcelona and Juventus have refused to follow suit.

Senior Uefa executives and other influential figures on the club scene are unsure of their reasons.

The word from those clubs is that they want to talk. A statement released on their behalf last week in response to being charged by Uefa ended with a warning: "Either we reform football or we will have to watch its inevitable downfall."

At present, it does not seem as though Uefa is in the mood for a chat.

European football's governing body says the disciplinary case brought against the three clubs around their Super League involvement is independent – and there is no timescale for a conclusion.

However, as no club from Spain or Italy is due to be involved in European competition until August – in the new European Conference League – it is felt any decision to kick the trio out of the 2021-22 Champions League could be made at quite a late stage of the summer.

Speaking to a media conference on Friday, new Barcelona president Joan Laporta addressed the issues facing his club, which he admitted was more than 1bn Euros in debt.

"We cannot just pick up the phone and say 'send us money'. We did a lot of things wrong. Disastrous decisions were taken. I am not saying big clubs are not partially responsible. But a lot of parties are at fault. Certain people are holding some cards in their hands and have an attitude where they don't think anything will happen.

"We will fight to defend our interests and decisions are made to make football more sustainable."

The general view among all the Super League clubs is that in order to be more sustainable, football needs to generate more revenue – and that can only come through more matches involving the most popular teams.

They never quite say it in these terms but argue Champions League games involving lesser clubs such as Ludogorets, BATE Borisov and Cluj have no appeal beyond their domestic audience and it is only matches featuring the bigger clubs that do.

The idea would be to generate more money and distribute more.

Those who reject this say the biggest clubs have chosen to pay too much to players and their agents and are responsible for their own financial woes. By creating a Super League, the argument goes, all that would happen is the gap between those clubs and the rest would get wider and interest would reduce.

Wild cards could be scrapped

The new Champions League reforms, agreed from 2024, include two 'wild-card' slots for the clubs with the highest co-efficient who qualified for either the Europa League or European Conference League to be moved into Europe's elite competition.

If it had been in operation this season, as would have been the case virtually every season two clubs from the biggest leagues would have benefitted – Roma and Tottenham.

It has been admitted the system was only agreed owing to intense pressure from the clubs likely to benefit, many of whom joined the Super League anyway and are currently outside the European Clubs' Association.

Although the actual process of changing the method of accessing the Champions League is complicated, BBC Sport has been told there is unlikely to be any opposition to getting rid of the wild-card slots and those places could increase the number of qualifiers from the 'Champions Path' to widen the number of countries involved.

Is a greater spread of clubs the answer?

In the 26-man Belgium squad for Euro 2020, only two play their domestic football in the Belgian league, both for Bruges, champions for the last two seasons and three of the last four.

Poland's squad contained only four Polish-based players. The clubs where the other 22 play include Brighton, Norwich, Derby, Fortuna Dusseldorf, Chicago Fire and Benevento.

There is a fear in countries outside the top-five leagues that without homegrown international stars playing in the country, fans will get bored of watching a lesser standard of football and eventually not bother at all.

What they want is a wider spread of clubs being able to play in the major competitions, which they feel would stimulate domestic and international interest.

They want to tap into some of the glamour of Chelsea against Manchester City in the Champions League final in Porto on Saturday night, a game and a spectacle which suggested that all was well in the European club scene.

But at the end of a difficult season, it is clear football's problems are far from over.

'I also faced the ugly side of football': Mark Walters looks back at a pioneer of race in the gameDefying gravity with Lily Rice: The first person ever to land a wheelchair backflip
Source