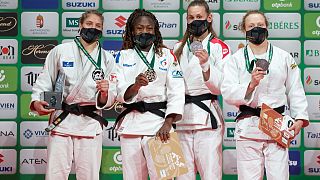 France’s Clarisse Agbegnenou danced in the aisles at the World Judo Championships in Budapest – but her switch to focus was instantaneous.

Throws, armlocks and strangleholds took her to the -63kg final against Slovenia’s Andrea Leski.

Leski had looked on form herself, with two big ippons on her way to her maiden World Championship final – but Agbegnenou would be too strong: scoring waza-ari with her trademark Harai-makikomi before clamping on a vice like hold to secure her fifth world title and a place in judo history.

“This year was really hard for me,” Agbegnenou said afterwards. “I’m happy to be here and have the five gold medals, and I have two here in Budapest so I’m really proud”

Europeans took the bronze medals too, with Sanne Vermeer of the Netherlands and Serbia’s Anja Obradovic completing the podium.

Matthias Casse took silver in the -81kg category at the last World Championships in Tokyo, and the Belgian looked determined to go one better this time around as he blasted his way through his preliminaries.

Tato Grigalashvili from Georgia was his explosive opponent in the final and Casse had to withstand a barrage of attacks before turning the tables with a massive utsuri-goshi for ippon and gold.

It’s been a goal for me since the Tokyo world’s where I lost out in the final and it feels amazing to win the gold here.

“I knew if I would take the title, I would be the first”, said Casse. “And it’s been a goal for me since the Tokyo world’s where I lost out in the final and it feels amazing to win the gold here, the last competition before the games, and it’s super nice.”

And Europe completed a clean sweep of the medals – with Frank Dewit taking another bronze for the Netherlands and Anri Egutidze claiming the other for Portugal.

With ippon following ippon, day four provided another display of incredible judo in Hungary, as the Europeans took back control.