Harry Kane suffered a late injury after scoring twice to rescue a point for Tottenham against Everton at Goodison Park.

Nine days before the Carabao Cup final and 58 days before England's European Championship opener, Kane limped off in stoppage time with an apparent ankle problem.

The striker seemed to land awkwardly after jumping for a header when defending a corner late on.

Manager Jose Mourinho said he did not know how serious the injury was.

"That's also a question I want an answer to as soon as possible but it's too early," Mourinho said.

"For him to come out it is not because it's nothing, it's something.

"We all felt the same fears of something that stops him playing Wednesday [against Southampton in the Premier League] and especially Sunday [the Carabao Cup final] but we will see."

Kane had earlier been at his clinical best, capitalising on two mistakes in the Everton defence to put Spurs ahead in the first half and grab a second-half equaliser.

In between Kane's strikes Gylfi Sigurdsson levelled from the penalty spot and gave Everton the lead by finishing off a fine team goal.

Everton pushed hardest for a winner and had the best chance to win it but Joshua King's effort was saved by Hugo Lloris and Richarlison fired the rebound over from 12 yards.

A draw suited neither side's pursuit of European football, with Tottenham staying seventh, five points behind fourth-placed West Ham and Everton a point and a place worse off, though they do have a game in hand.

Kane to the rescue but at what cost? 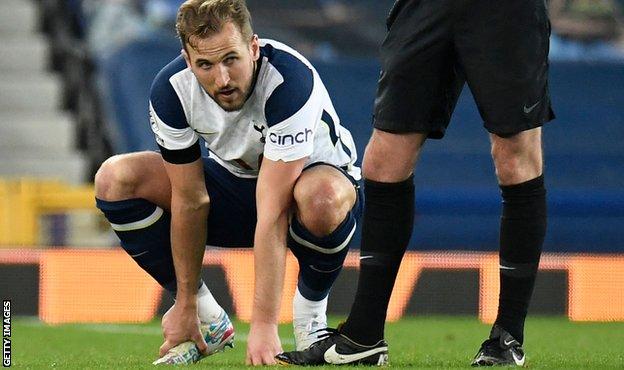 Kane walking gingerly before bending down and holding his right ankle will strike fear into every Tottenham and England fan.

He left the field of his own accord but did so immediately and shaking his head.

Kane has suffered a series of ankle injuries in the past which only adds to the concern.

In 2018-19 he had two significant spells out with a left ankle injury and in 2017-18 he missed a month with an injury to the right ankle. He also endured separate absences of six and four weeks during the 2016-17 campaign.

Earlier this season he injured both ankles earlier but ultimately returned sooner than expected.

"Obviously it's always worrying when you see him limping because he doesn't fall over easily," team-mate Eric Dier told Sky Sports.

"He takes a lot of knocks. It's early days to say how bad it is but I'm sure he's a tough boy so will do what he can to be ready."

Kane had earlier shown his massive importance to his team once more, slamming home two sharp finishes from his only opportunities in an otherwise underwhelming Spurs performance. He has been involved in 62 goals in 62 appearances under Jose Mourinho.

His latest strikes were his 20th and 21st of this season, taking him two clear in the race for the golden boot. They also lifted him into seventh on the all-time Premier League scorers chart, clear of Robbie Fowler and Jermain Defoe.

Everton 2-2 Tottenham: Carlo Ancelotti says side will fight to the last for European spot

Everton were much improved from their toothless performance in a goalless draw with Brighton on Monday. It was two mix-ups at the back that cost them three points.

For Kane's opener Michael Keane misjudged a header and flicked a cross into the Spurs striker's path and the England defender was involved again for Kane's second goal.

As a tame cross came in, he headed the ball into his fellow centre-back Mason Holgate and it deflected to Kane in the box. For a second time Kane gave the returning Jordan Pickford no chance.

There were positive signs in the rest of Everton's performance, however. They created opportunities despite the continued absence of their top scorer Dominic Calvert-Lewin because of injury.

Sigurdsson's second was a delightful left-footed guide into the far corner from Seamus Coleman's cross after the Ireland international had played a slick one-two with Richarlison.

Ever ton also benefited from clumsiness by Sergio Reguilon, who rushed into the back of James Rodriguez to foul the Colombian for Everton's penalty. There was not much contact but enough for the spot-kick to be awarded.

The Toffees are now five games without a win in the league but this was a much more promising display.

"If we made less mistakes in the box we can win the game," manager Carlo Ancelotti said.

"It was one of the best performances we have played here at home. We created the opportunities to win the game."

The past five meetings between Everton and Tottenham at Goodison Park in all competitions have produced 26 goals (10 for Everton, 16 for Spurs), an average of 5.2 per game.Everton have failed to win any of their past five Premier League matches (D3 L2), their longest such run since December 2018 under Marco Silva. No Premier League side has dropped more points from winning positions this season than Tottenham (20). Everton have scored all five of the penalties they have taken against Spurs in the Premier League (Cottee, Unsworth x2, Ferguson, Sigurdsson). Only versus Chelsea (6) has Everton's Gylfi Sigurdsson scored more Premier League goals than against Tottenham (5). Indeed, Sigurdsson is the third player to score a Premier League double against Spurs having played for them in the competition, after Darren Bent (April 2010, Sunderland) and Matthew Etherington (December 2011, Stoke).Only Alan Shearer (7) and Sergio Aguero (6) have scored 20+ goals in more different Premier League seasons than Spurs' Harry Kane (5 – level with Thierry Henry).Harry Kane has been directly involved in 62 goals in 62 appearances in all competitions for Spurs under Jose Mourinho (45 goals, 17 assists) – no Premier League player has more goal involvements in this period (since 23 November 2019).

Spurs play Southampton on Wednesday (18:00 BST kick-off) in the Premier League before their Carabao Cup final against Manchester City at Wembley a week on Sunday.